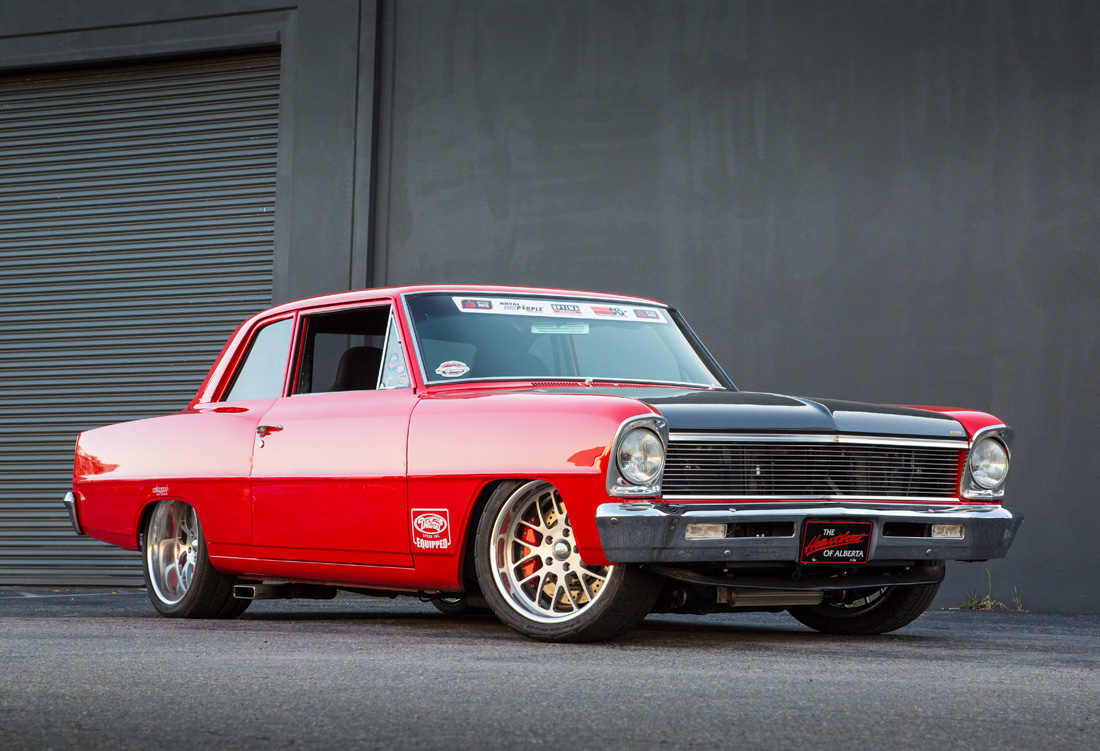 The first time I met Grant Reierson, I knew something about him just wasn’t right. First off, he’s Canadian which makes him just slightly off center in the humor department, and then I saw that his 1966 Chevy II is not the “hard top” that everyone always wants, but rather the “post car” which is boxier little brother. I happen to dig post cars. In fact, there aren’t many post cars that I don’t like, but for most people this is the far less “cool” Chevy II to own. Thanks to a restoration turned Pro-Touring metamorphosis, this Chevy II post car not only turns heads, but turns corners just as well, and we like it a lot.

CLICK THE LINK AT THE BOTTOM OF THE PAGE TO SEE A FULL GALLERY OF GREAT PHOTOS OF GRANT’S 1966 CHEVY II.

Because the weather in Edmonton, Alberta, Canada isn’t hot rod friendly for a big part of the year, and because Grant and his buddies love a good road trip, we were able to catch up with him at the Goodguys show in Del Mar a few weeks ago and shoot some cool photos of this bitchin little machine. 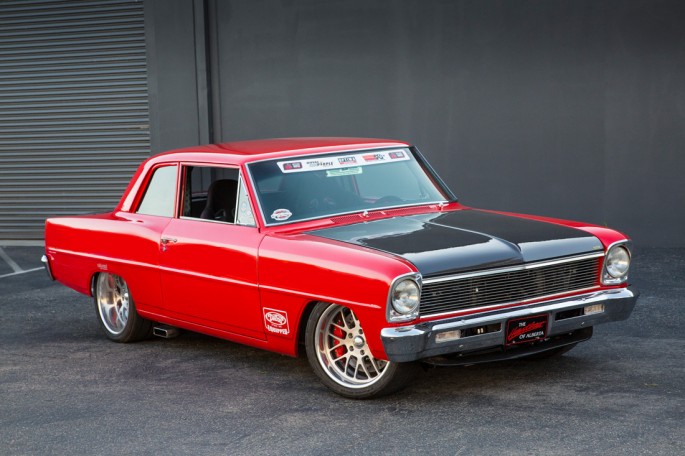 Grant has owned the Chevy II for over 18 years, and the “restoration” is celebrating it’s 10th birthday this year., He’s been changing, improving, and customizing it from the start, and he’s done ALL of the work on it himself outside of body, paint, roll cage, and the building of the transmission. We’re talking all the fabrication, installation, and customization! That’s impressive. 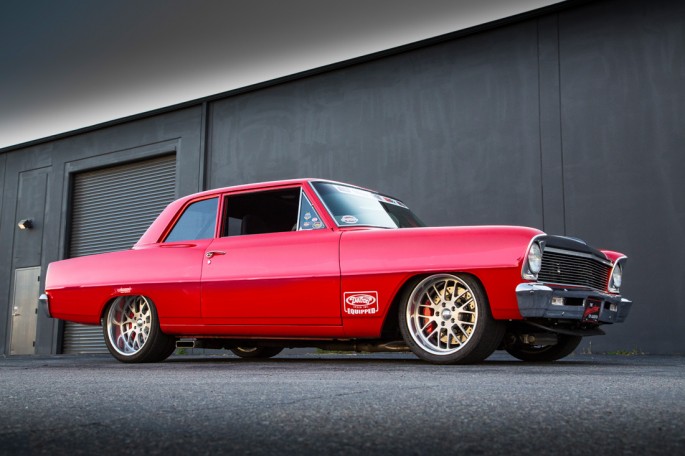 And to reward himself for working that hard on building this car over the years, Grant drives it nearly 10,000 miles per year. With several months of the year full of crap Canadian weather, that means Grant is road tripping to a lot of events. Some of the highlights are Goodguys Kansas, Des Moines, Columbus, and Del Mar, as well as Pro-Touring events like the Motorstate Challenge, Optima Invitational Road America, and the Optima Ultimate Street Car Invitational in Las Vegas. He’s also stepping to run even more competitive events this year, with the plan being a full season of autocross action at home. 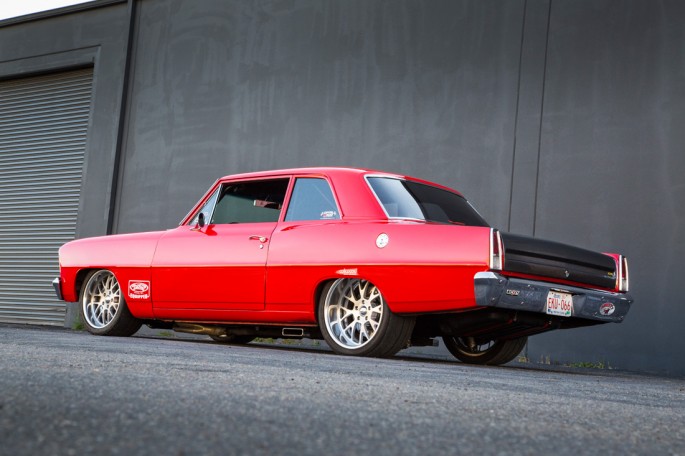 Yes it’s pretty, but it’s no trailer queen. Grant puts more than 10k miles per year on this hot rod.

Powering the Chevy II is a 377 cubic inch small block Chevrolet. And don’t for a second think it’s made with a 350 crank in a 400 block using bearing spacers and chewing gum. Nope, this ones got a Motown block that is filled with an Eagle forged crank, h-beam rods, and forged SRP pistons that make a pump gas friendly 9.6 to 1 compression ratio. Comp supplied the XR274HR hydraulic roller cam, which activates the valves in AFR’s venerable 195 cc Eliminator heads. We’ve had great luck with these heads in the past and know that they support big power on pump gas. 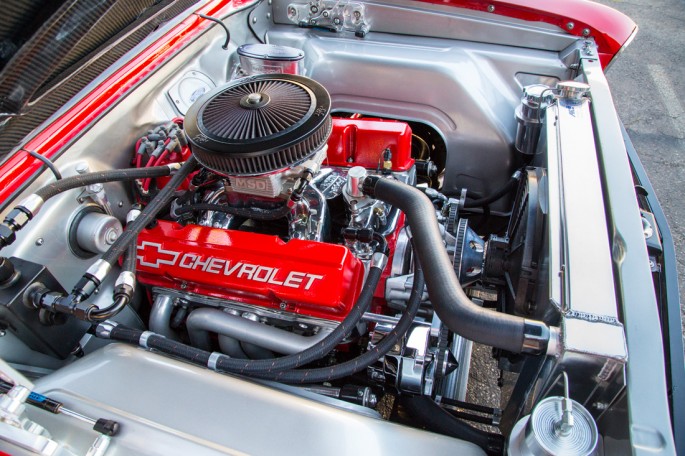 Topping off the long block is an Edelbrock Performer RPM and MSD Atomic EFI. Fuel gets to the high winding small block via an Aeromotive Stealth fuel system, which makes for a super clean and simple install that’s perfect with the Atomic EFI. Lighting that fuel is an MSD Digital 6 Ignition system, and custom 1 ¾” headers feed into 2 ½ inch dual exhaust with a crossover. 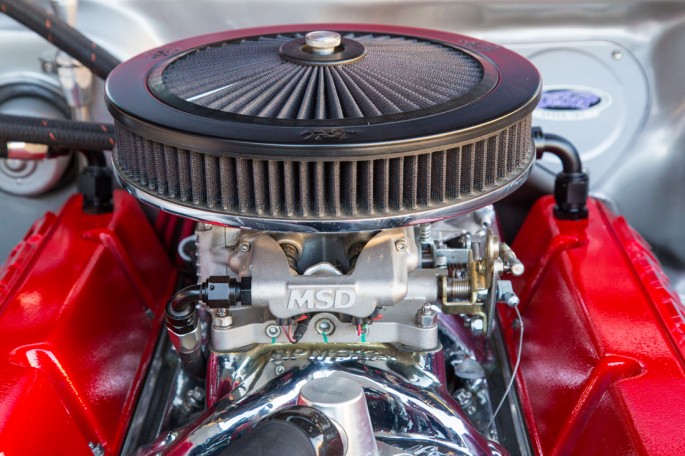 The Atomic EFI and Edelbrock Performer RPM provide all the top-end power this Chevy II needs while also keeping low speed response nice and crisp. Just what you need on the autocross.

And not only does the engine make great power, it also has one hell of a place to call home. The engine compartment in this Chevy II is spotless, and quite frankly way nicer than us or anyone else expects from a car that gets driven this much. Ring Brothers Hood hinges, a custom breather setup to handle the big G’s in the corners, and several subtle modifications make this one clean engine compartment that we would be proud to have in any one of our cars. 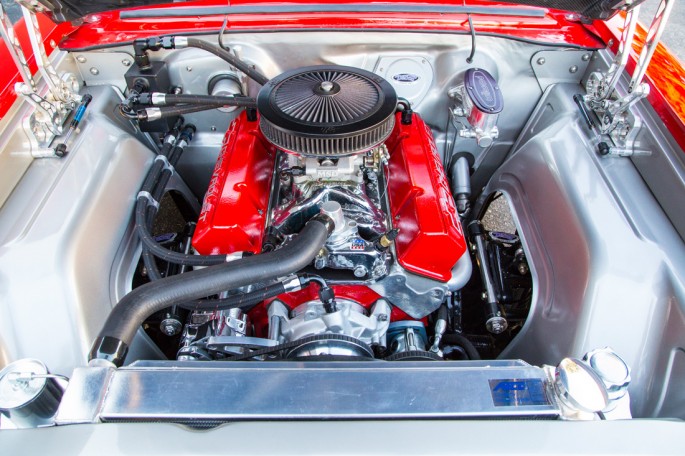 While 6 speeds are all the rage in the Pro-Touring world, Grant chose to use the quick shifts of a custom built 700r4 to his advantage. The 2400 rpm lockup converter allows the 377 to get right into it’s happy place, without coming on so late and strong as to blow the tires off on every corner of the autocross. Shifting chores are handled by a Retrotek Speed paddle shift system that makes Grant feel like a new Lambo owner, only without the gold chains and attitude. Wait, he’s Canadian, he’s got the attitude. And we love him for it. 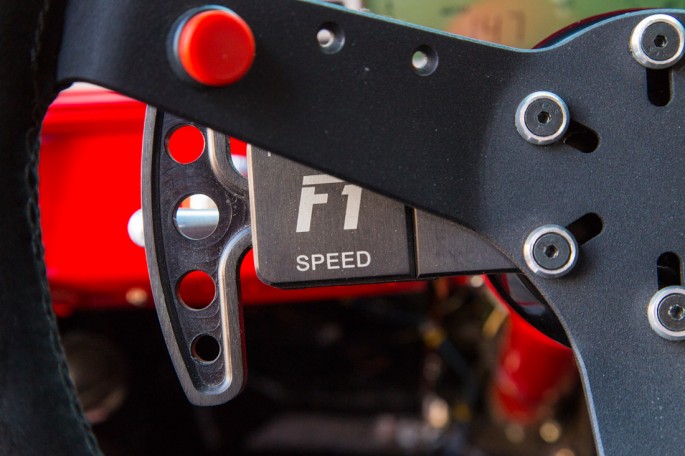 Rather than the typical 6-Speed, Grant went for a built 700r4 with a fast shifting Retrotek paddle shift system.

Clearly this lightweight beast has plenty of go, but on the autocross and road course the whoa is just as important. The master cylinder and proportioning valve are straight out of the Wilwood catalog, as are the 14 inch rotors front and rear. Yes, 14 inch front and rear. And as if that isn’t enough, Grant decided to squeeze those big boys with 6 piston Superlite calipers up front and 4 piston Superlites out back. Hell, it’s even got an integral parking brake. 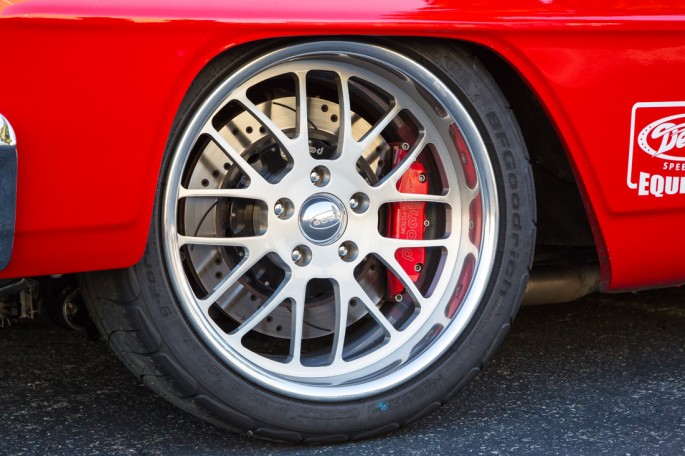 Because Grant’s Chevy II started out mostly as a restoration project, the suspension has been changed a lot. In fact, he’s on suspension system 5.0 up front thanks to a progression that started stock, got poly bushings, then Global West Del-a-lum bushings, then a Mustang II front subframe, and finally Detroit Speed and Engineering’s latest subframe for the Chevy II. Grant says he wishes DSE would have come out with that sucker sooner, it would have saved him a lot of time and money. 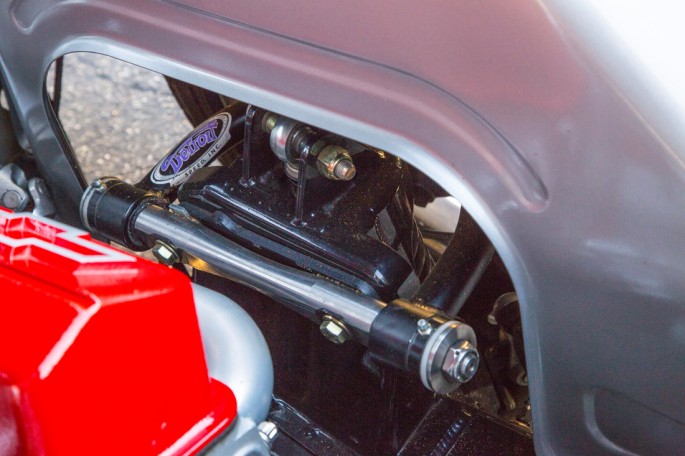 Out back a Ridetech Triangulated 4-link handles the locating duties for the Fabricated 9” Ford housing. AFCO supplied the coil-overs, and center section is filled with a Detroit Tru-trac and 3.70 Motive gears. Grant is not nice to these parts, and each one has proven to be a reliable piece of his hot rod puzzle. 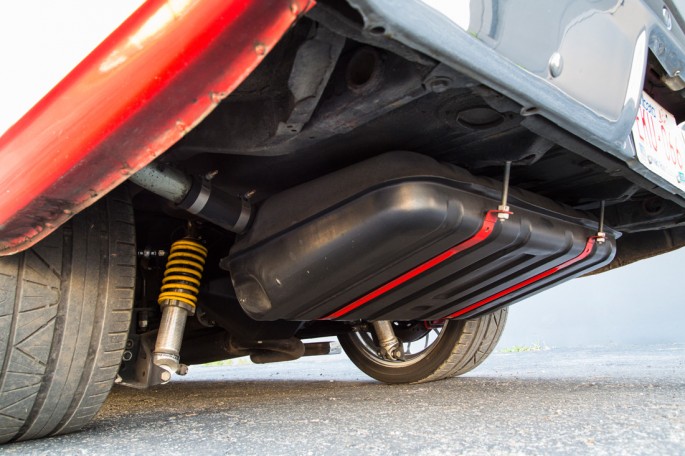 Ridetech’s Triangulated 4-link, AFCO Coil-overs, and a fabricated 9-inch do rearend duty. An Aeromotive Stealth Fuel System in hidden in the stock tank.

The entire car is set off with Boze “Pro-Touring” 18×9 inch wheels up front that are wrapped in BFG Rival tires that measure 275/35/18. Out back are a set of Boze’s in a 19×10 that feature 305/35/19 BFG Rivals. We almost feel bad for the BFG’s, because they are the only thing keeping the power and the pavement together. 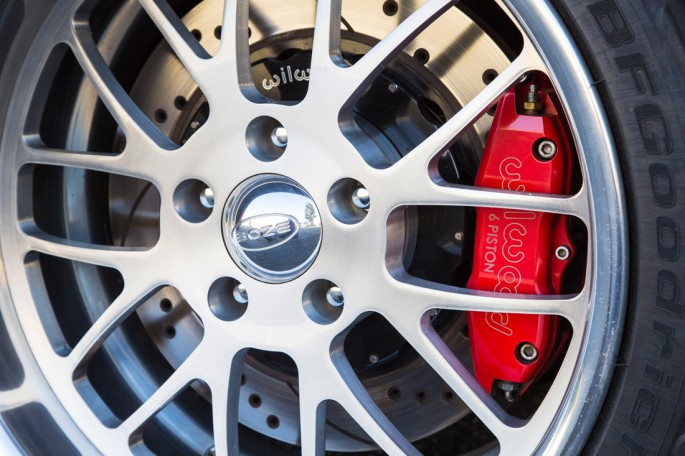 Inside the Chevy II you’ll find all the hard core Pro-Touring stuff, like a roll cage, race buckets, Racepak digital dash, and Simpson harnesses. What you will be surprised to see is the custom center console, fancy carpet, and a bitchin Kenwood/Audison DVD Navigation Amplified Stereo system. It cranks. Ask us how we know. While a lot of guys are trying to shave weight, Grant figured he wanted great tunes while cruising thousands of miles. We can’t argue with that. 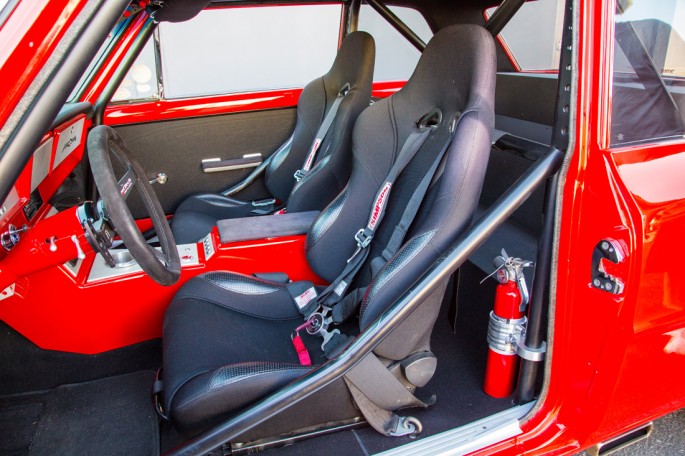 It’s pretty standard Pro-Touring fare from this angle, until you look closer at the cage that’s tied into the B-pillars, and that snazzy looking console. 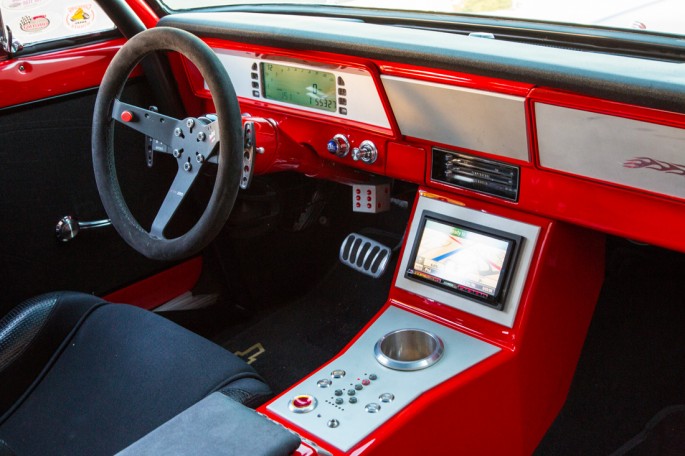 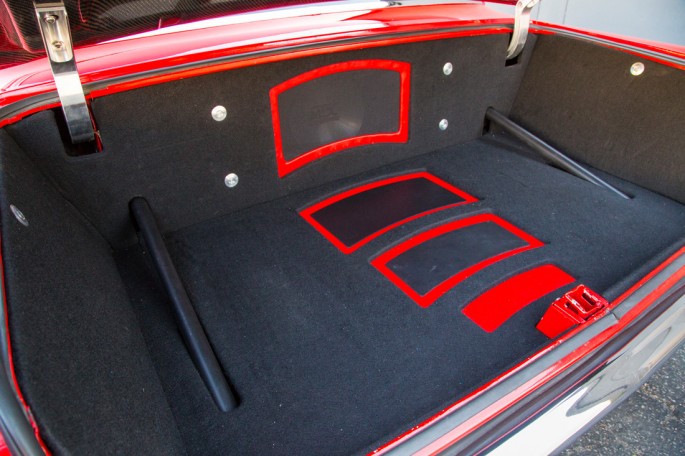 Even the trunk got the treatment, including Eddie Motorsports hinges, clean custom stereo install, and plenty of upholstery.

Outside the car is the same red as the Canadian flag, and we’re sure that’s no accident, given the fact that you usually see Grant with one attached to one rear quarter window. In fact, we were dissappointed he didn’t have it on for the photo shoot. 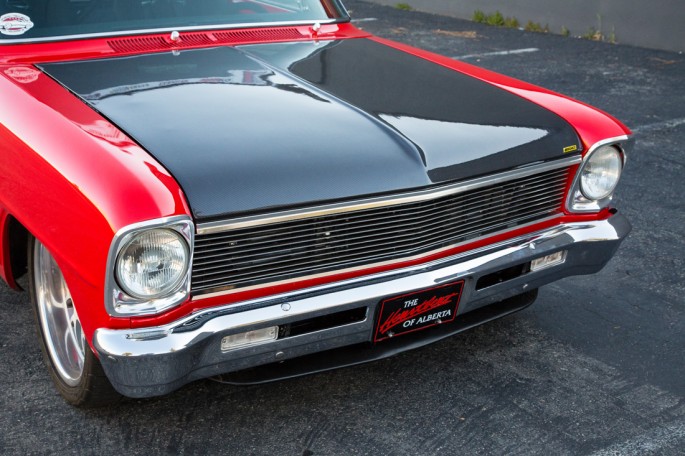 A Billet Grill, and Anvil Carbon Fiber Hood and Trunk Lid make a statement and separate this particular Chevy II from the crowd even more than the post car factor, but it’s no show queen. It’s a great looking car for sure, but if you really look at this car you’ll see that it’s driven. Which is exactly what we build them for. Grant’s not the sit around and stare at it type of guy, and we admire him for that. This Chevy II not only looks great and drives great, but also sort of inspires people. Sure there are some custom things on it that are beyond the skill level of some folks, but this car was built and modified, modified some more, and has grown into the Pro-Touring machine you see before you. It wasn’t built all at one time and “debuted”. This car represents what a hot rodder can do if he or she is motivated and passionate. We dig that. 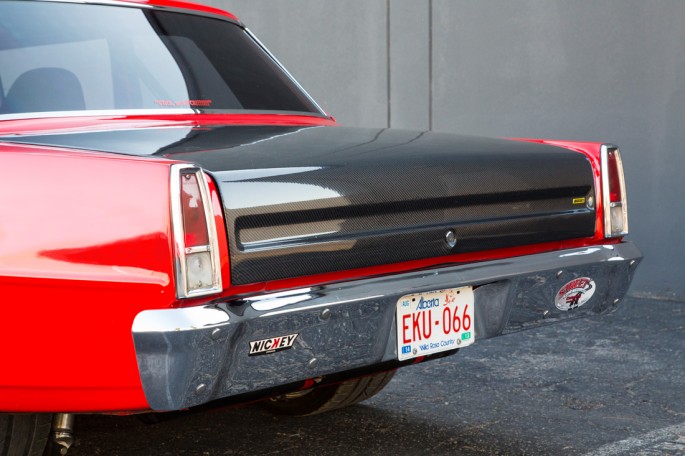 When we asked Grant what his favorite part of the car was, and if he had any cool stories, here was his response.

“It is hard for me to pick a favorite thing about the car, it handles like a new Corvette. It is comfortable driving in the city, or on the highway. The stereo is fantastic! When I park it, it always seems to draw a crowd, and I get more than a few “thumbs up” when I’m out driving.

“And yes there are some good stories involving the car, but nothing that can be told in a public forum!”

Grant wants to send a special Thank You out to Capitol Gear Motorsports, who carry all of the cool hardware that his Chevy II is equipped with, and for letting him out to play. 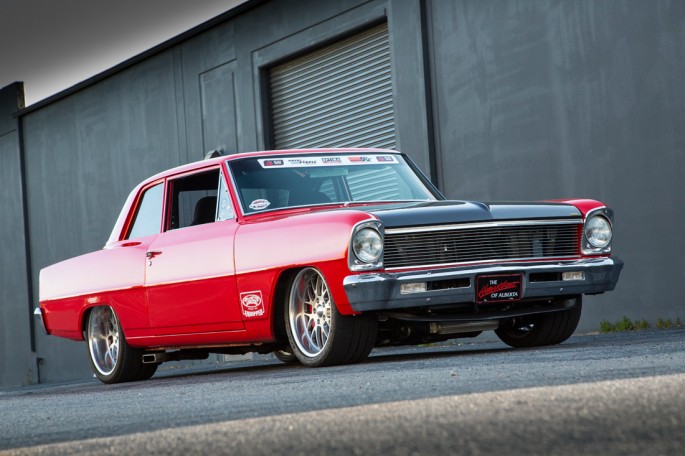 A Peek Inside Customs By Bigun - The North Carolina Shop Does Everything From Gassers To Small Tire Killers Watch Danny Thompson's Challenger II Fire Up - Twin Hemis On Nitro!