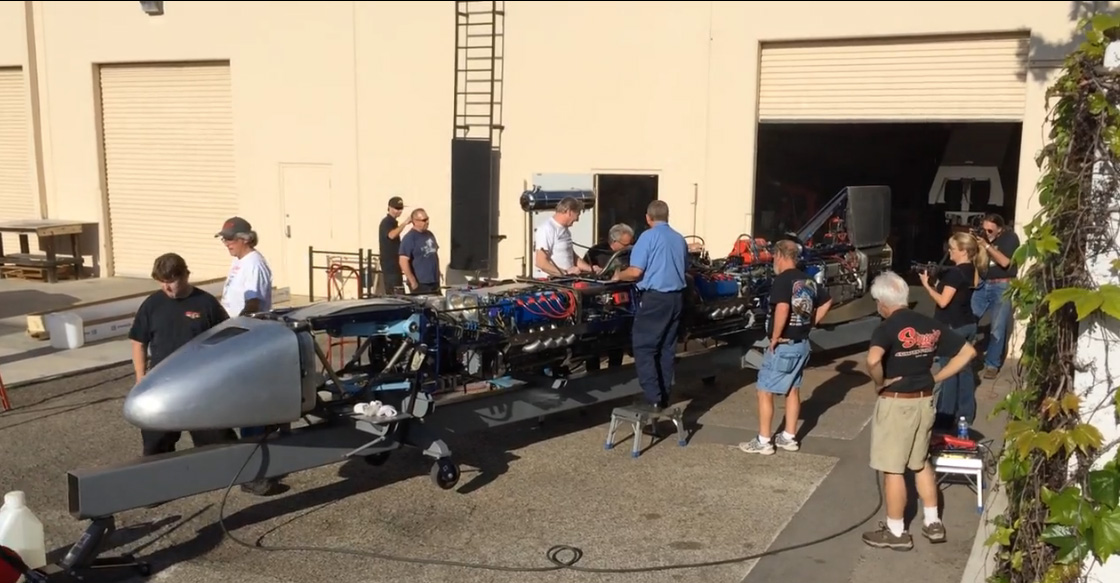 Danny Thompson’s multi-year effort to resurrect, update, and race his massive, twin nitro-burning hemi engine powered Challenger II streamliner reached an important milestone recently when Thompson wheeled the huge car outside and started up, presumably for the first time. If you have been following this project, you know that it is one of the most interesting builds happening in the world today. The amount of precision work done with this car to package and fit everything is mind blowing and the components that Thompson has used in the construction are all top shelf stuff. We’re hoping to see it on the Bonneville salt this year and we know that Thompson is hoping to be there as well.

As you will see in the video, there is a hemi mounted in the front of the driver area and one mounted aft of it. Danny is looking to complete the job his dad started with this car decades ago and break the existing wheel driven speed record at Bonneville which is well over 400mph. The car is 32-feet long, 34-inches wide and it weighs nearly three tons. The body is made up of almost 70 hand made aluminum panels, the engines make about 2,000hp each, and this baby will suck down about 50 gallons of nitro/alcohol mix per run. We cannot wait to see/hear it for ourselves on the salt!

Until then, press play below to see Danny Thompson’s Challenger II fill the air with the sounds of nitromethane fueled combustion!