Ken Block’s Latest Gymkhana Video Is Dropping On Tuesday, We Break Down The First Six…Expertly 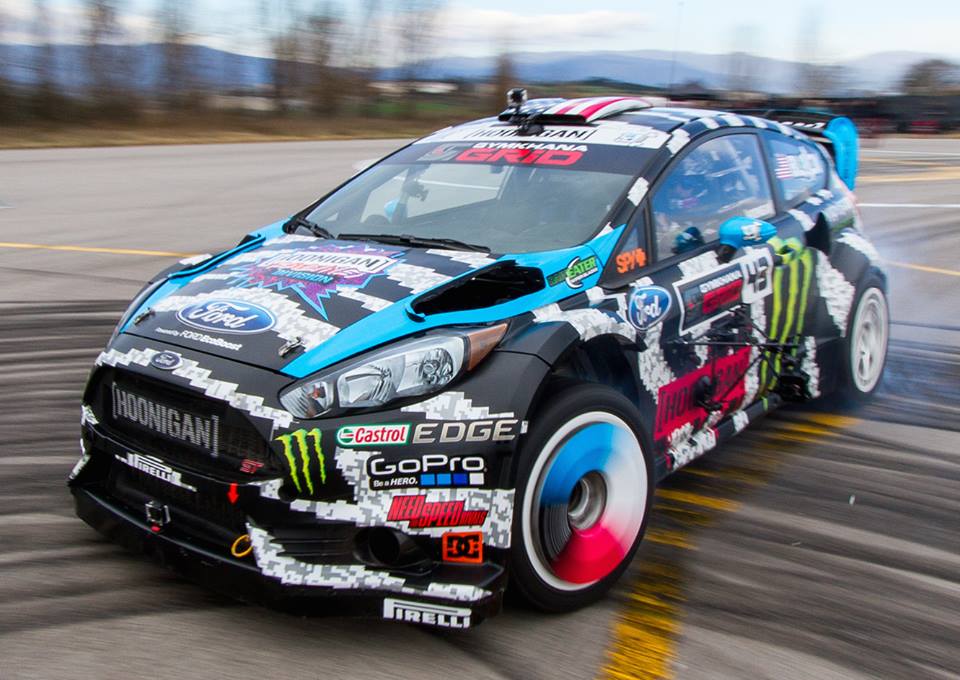 Love them or hate them, Ken Block’s Gymkhana videos have now been around for the better part of a decade, and whether we’re willing to admit it or not they’ve helped shape a number of fads and trends within our automotive culture, admittedly more-so with the “Sport Compact” crowd than any other.

Yesterday, Ken dropped word that him and his rally-prepped Ford Focus ST would be starring in a new Gymkhana video this coming Tuesday, April 22nd, so we thought what better way to prepare than going back and revisiting the six main Gymkhana videos, rating them as we go (This means that I had to watch each video several times and take notes; it’s worse than you’d think. Really.)

Hope you packed a lunch kiddos, as we’ve got a good hour of turbo-charged, lightbulb-smashing, Segway-driving, gratuitous-slow-motion action ahead of us. In preparation I’ve pounded five Monster energy drinks, put on my best flat-brimmed hat, and added “Bro” back into my vocabulary. So, Broseph, you ready for this? Bro on.

Ah, 2008. Simpler times, those were. Back then, all you needed were a few cameras, a rally-prepped 2006 Subaru Impreza WRX STI, an open airfield, and a smug look to make one of the most-watched videos of that year.

Snide remarks aside, this is arguably my favorite video because it’s the most raw and unpretentious: No fancy tricks, the car didn’t look like a teenage girl all tarted up in ridiculous fashion for her first high school dance, and the only sounds were the roar of the engine and the chassis attempting to rattle Ken’s teeth out every chance it got. Plus, this was during the era when Block still had a sizable number of critics (Well, he still does) and this video was a big ‘ole middle finger to anyone that questioned his abilities as a wheelman. It also doesn’t hurt that it features one of my favorite body styles of the Impreza, the 06/07 “Hawkeye”.

Ok ok, there was the now cliche “Doing donuts around a guy who is simultaneously riding a Segway and crapping his pants”, but at the time this was ground-breaking stuff. Listen, America was in a bad place with the aftermath of the sub-prime mortgage crisis at the time, so we NEEDED this. KEN BLOCK HELPED SAVE AMERICA.

You know how sometimes you’ll find something cool that only you and several million of your closest friends know about, and then you find out that there’s a sequel and get incredibly excited, only to find out that it’s now been ruined by a company commercializing it?

I mean, I get it: If the last video I made received over twenty million views, I’d sell out too, but when the video starts with a “warning” that it’s a shameless advertisement for a shoe company, you know that things are going bad quickly, as in “The Golden Corral just ran out of food and a bus full of hungry elderly just pulled up” bad.

Gone were the pure engine sounds, only to be replaced by Block’s gloved hand on fire, DC shoes smashing balloons full of colored water, and much shattering of light bulbs. Seriously, a whole lot of light bulbs, bro. Oh, and the Segway guy evidently wasn’t available, but luckily Rob Dyrdek was available with a paintball gun.

You know what though? It got over 40 million views on youTube alone, the stunts were still entertaining, and there’s just something undeniably cool about a rally car drifting sideways in slow motion, even if it is only over a few dozen water balloons.

I’ve got to give our Bro Ken some credit for Gymkhana 3, as he wisely separated into two parts: Part 1 was a terrible music video that featured more light bulbs than rally cars (Seriously, what is up with this dude and fluorescent lights?), with the second part being what car guys and girls actually cared about, which is a rally car shredding tires and being driven hard.

I was personally disappointed to see the Rallying Imprezas discarded for a 2011 Ford Fiesta, but that’s what happens when you join the Ford Racing team. I quickly got over my initial feelings after being informed that the little AWD monster put down over 650 horsepower to the wheels and did 0-60 in 1.9 seconds. Yeah, that’s quick.

It didn’t hurt that the DC Shoes crew stepped up their game in regards to the location as well, this time featuring l’Autodrome de Linas–Montlhéry in France, home of a wicked oval track with 51 degree banked turns.

Of the six videos, this one is in the top three due to Block beating the car like it owned him money (Check out the donuts towards the end if you don’t believe me) and it featured the return of the America-saving Segway Man.

Oh Kenny, Kenny, Kenny. Bromeister sucked me back in with the “returning to his roots” Gymkhana 3, only to come out with a sequel that looks like something a bunch of frat boys with access to the AV Club’s equipment would produce: Explosions, hair metal, zombies, and more 80’s movie references than you can shake a stick at. I mean, I’m not COMPLAINING, I’m just saying that this is 2 Fast 2 Furious to Gymkhana 3’s Fast and the Furious. Neither one was Oscar material, but at least Gymkhana 3 attempted to keep a straight face. (Did I seriously just use the Fast and the Furious as a positive benchmark?)

All my kvetching aside, it’s still entertaining to watch, even if you keep muttering to yourself “This is so stupid, but I wish I was the one doing it” the whole time. Alright, it was the dude in the ape suit jumping over the car that won me over.

Strangely, no light bulbs or Segways to be found.

Bro, let me tell you: Second to the original, Gymkhana 5 is my favorite of the series, if only because Block somehow sweet-talked his way into having a major portion of the city of San Francisco shut down for use as his personal playground. You know who I want to be friends with? That guy.

Ok, as I’m writing this live while watching the videos again, I take back my last statement. This is the best video in the series: Stunning location, production quality through the roof, and the jumps at the 4:54 and 5:40 marks blow my mind. Oh, and we get quite possibly the best use of The Styx’s “Come Sail Away” at the end as well. I would have loved to see the look on their faces when the royalty checks started coming in. “We got paid for WHAT now?”

Pretty sure that after Gymkhana 5, Kenneth said to himself, “Bro, without somehow shutting down the entire West Coast for filming, I don’t think that I can top the last one. How about I just get a giant spiked wrecking ball, some painted barriers, and some construction equipment again? Oh, and I should bring back the Segway Guy. People seemed to like that.”

The stunts were decent, but overall a letdown after watching the previous video in the series. Still, it was better than the vast majority of the videos on youTube.

So, there we have it, our rehash of the Gymkhana series up to this point. What’s your take on this whole deal? Looking forward to the next video? Couldn’t care less? Let us know in the comments brotato.

5 thoughts on “Ken Block’s Latest Gymkhana Video Is Dropping On Tuesday, We Break Down The First Six…Expertly”