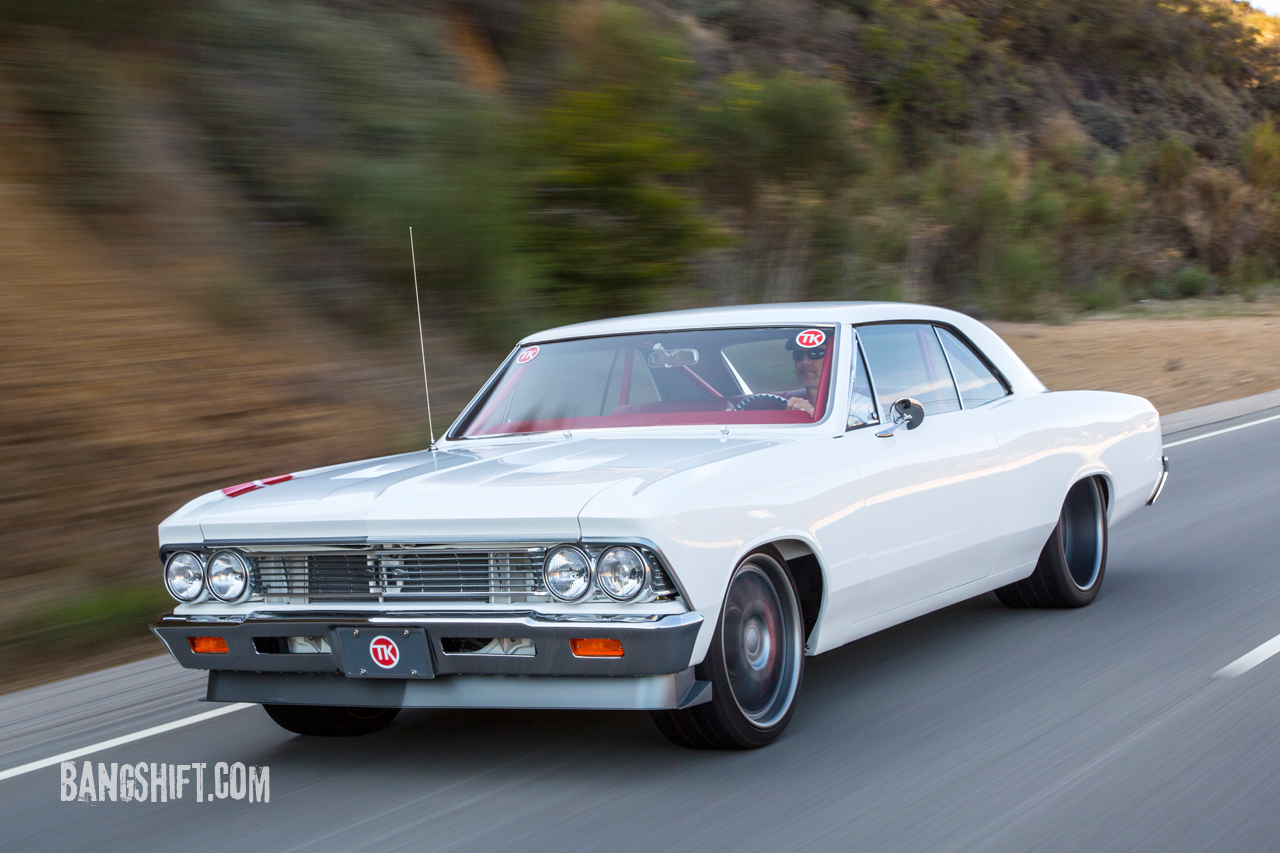 Mike Cavanah’s 1966 Chevelle is NOT the norm. With quarter panels as sexy as that spot on a woman’s lower back,  just above their hip, you wouldn’t expect it to be this white. Red? Sure. Black? With bodywork this nice hell yeah. But somehow it works. Really really well. It’s pure, but not too pure. This particular “girl” might be dressed in white, but she’s a red dress girl on the inside.

WE HAVE LOTS MORE PHOTOS OF MIKE’S BITCHIN CHEVELLE. CLICK THE LINK AT THE BOTTOM OF THE PAGE, AFTER YOU READ THE FEATURE, TO SEE THEM ALL. 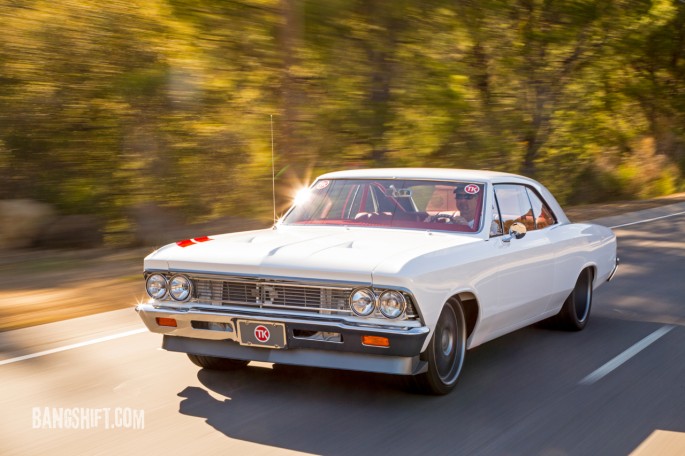 The latest technology from GM, and the aftermarket, make this particular Chevelle as functional as it is pretty, and just begs for you to beat on it like it owes you money. In this particular case we’re pretty sure it owes Mike a lot, but thanks to the impeccable job that Jason and the crew at Timeless Kustoms have done, that’s the furthest thing from his mind when he’s out tearing it up on the road course or autocross. 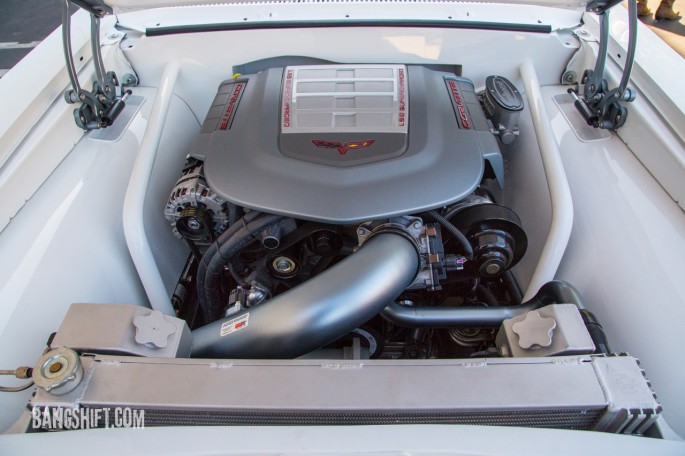 Like a lot of us, Mike grew up around cool cars. His dad’s ’57 Chevy, and ’68 Corvette, provided the inspiration that molded him into the certifiable car junkie he’s become, and it’s been downhill ever since. His bitchin Chevelle is a testament to his passion, vision, and a burning desire to go fast. 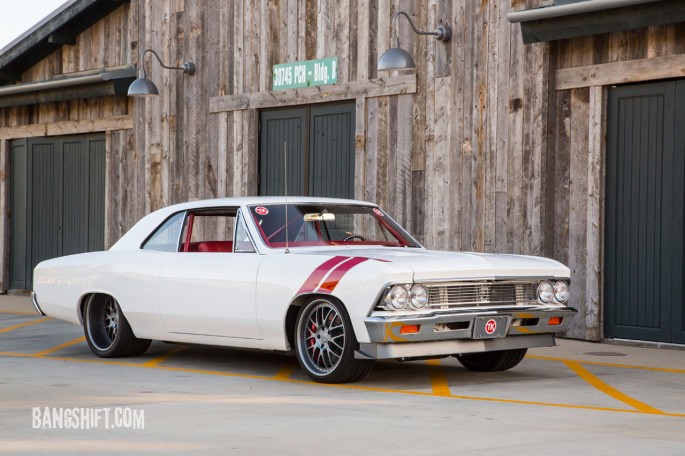 Working with the crew at Timeless Kustoms, Mike has created a hot rod Chevelle that combines the classic styling we’ve all come to love in ‘60s muscle cars with technology that results in a Chevelle that will hang with any late model hot rod. Builder Jason Pecikonis says “ I love the way GM engineers stuff, and I’m just trying to use that technology, and clean styling, to bring muscle cars to the next level.” Well Jason, we think you’ve pulled it off. If GM was re-launching the ’66 Chevelle in 2014, we think this is what they would strive for. 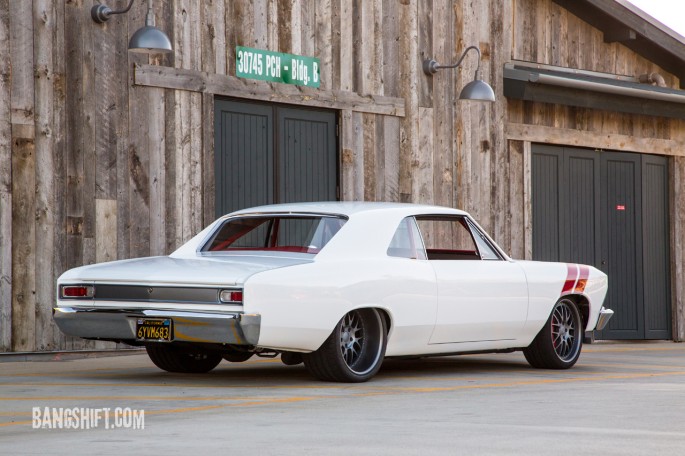 The business end of this ’66 is stuffed full of 416 cubic inches of Scoggin Dickey built LS3 featuring CNC ported heads on top of a short block stuff with a Callies crankshaft, Oliver Rods, and JE Pistons. Controlling the airflow through the cylinder heads is an SD spec roller cam with 234/244 degrees of duration at .050 with .650 lift on a 112 centerline. As if that wasn’t enough, the LS9 supercharge featuring Lingenfelter Performance Engineering pulleys and drive setup are good for 12 lbs of boost which results in 660 horsepower and 650 lb. ft. of torque to the tires on the chassis dyno over at K&N. 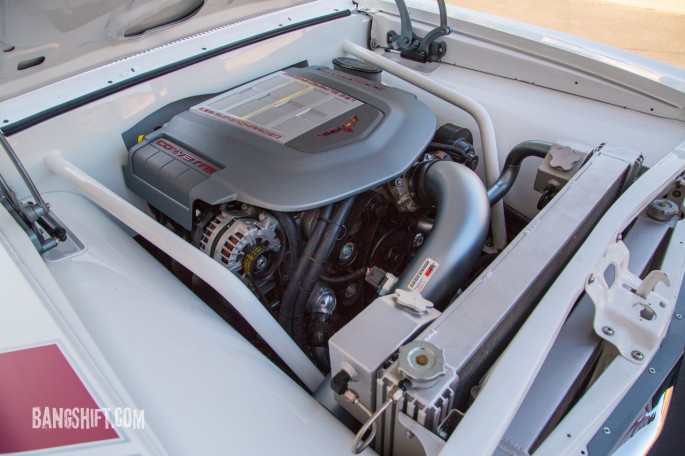 The engine is also fitted with an Accusump to protect against any high G oil pressure fluctuation. A 4 inch K&N air filter lets the air in, and one off 1 7/8 to 2 inch step headers by Timeless Kustoms let it back out through a 3 inch exhaust system that is “mellowed” by a pair of Pypes mufflers. Controlling all the fuel and spark is a custom tuned GM E67 ECU from a CTSV, and is wired up via a modified GM LS9 Hot Rod Harness. A custom Flexalite radiator and fans keep the engine cool, while a custom built heat exchanger makes sure the air coming out of the supercharge is as cool as possible. Fuel Lab gets the fuel to it thanks to Aeroquip pushlock hose and fittings. 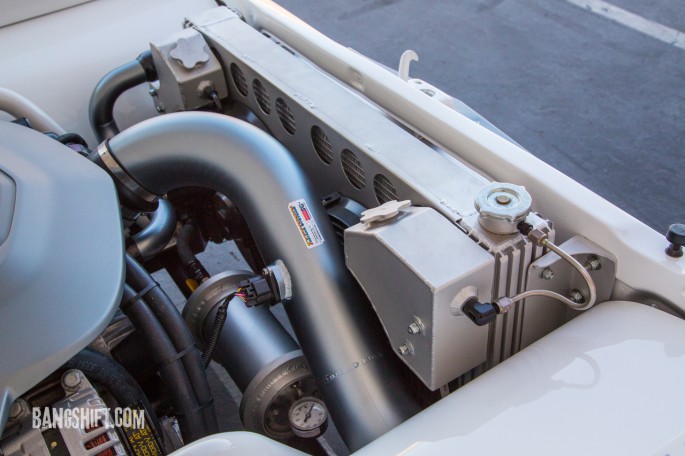 All that horsepower is funneled through an American Powertrain T56 Magnum that’s good for 850 lb. ft. Connecting the crank to the trans is a Spec dual disk clutch. And the trans feeds the Morrison 9 inch thanks to a Coast Driveline 3” steel shaft with 4150 joints. Strange supplied the third member that’s stuffed with 3.73 gears and a 33 spline Detroit Locker that sends power through the Strange 33 spline axles. 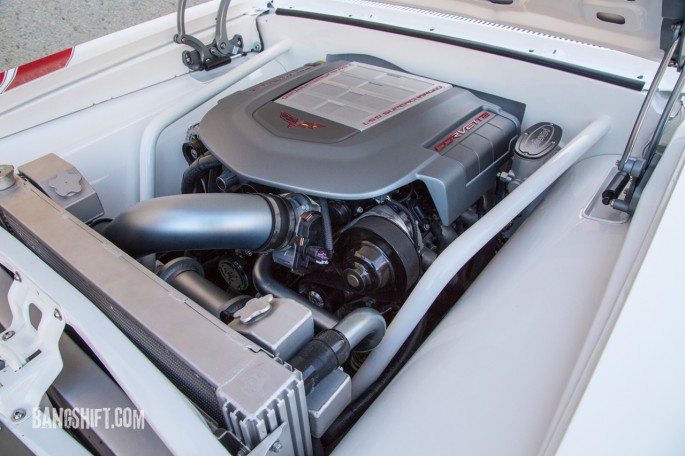 Making all that power is great, but just as important for cruising, autocross, and the road course are brakes that can stop this 3850 beast, and Jason and the guys at Timeless called upon Brembo Carbon Ceramic brakes from a brand new ZR1 Corvette to do just that. Because the Corvette script would have been wrong on a Chevelle, the calipers have been shaved and Chevelle put in it’s place. Thanks to KOR3 rear brackets, the entire ZR1 rear brake setup is intact, including the parking brake function. 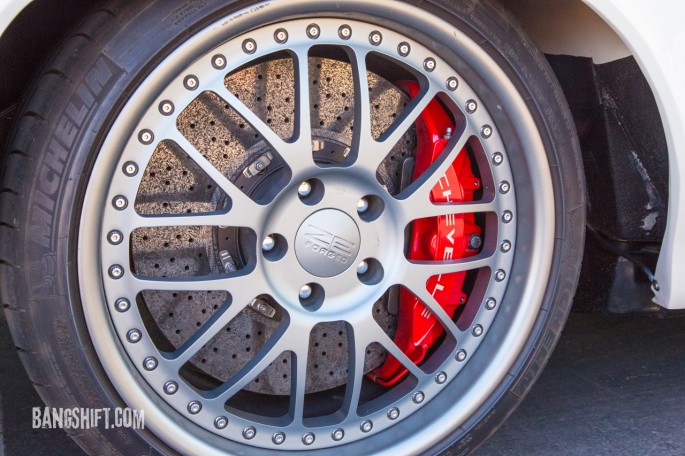 Ridetech Triple Adjustable Coil Over shocks are used up front to control the efficient C6 Corvette suspension so that the 2.6 turn power rack can be used to it’s fullest potential, which is exactly what this car was built for. Out back another set of Ridetech TAs are used to suspend the Morrison Triangulated 4-link. The suspension works so well that the swaybars on this Chevelle seem small in a world where bigger is usually better. The front swaybar measures only 3/4 of an inch, with the rear coming in at 5/8 of an inch. All of the suspension is hanging off a chassis custom built by Timeless Kustoms to utilize the factory body mount locations while getting the car down low and taking full advantage of the Morrison front clip. For extra torsional rigidity there are multiple crossmembers and inner rails that GM never thought of in 1966. And the weight distribution is 50/50 thanks to a full 8 inches of engine and transmission setback! Boze Mesh 3 piece wheels that measure 19×11 and 19×13 are wrapped in 285/35/19 and 335/35/19 Michelin Pilot Sports, respectively, to provide not only good looks but great grip as well. 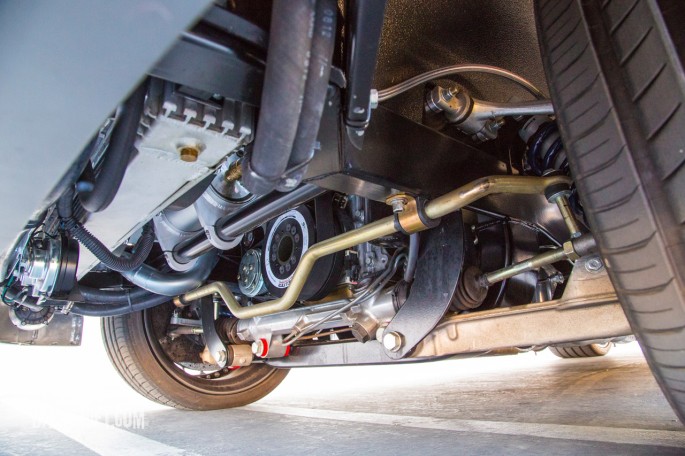 While all the great stuff underneath is what we all dream about, the interior and exterior of this particular ’66 Chevelle will keep you entertained for hours. This is one of those cars that you can’t stare at without finding more and more cool stuff. The details are insane. The first time I saw this car I spent 10 minutes staring at just one body line at the very bottom of the rear quarter panel. It’s lazer straight, sharpened to perfection, and yet mind boggling because it’s painted white. And not just any white, but pure toner only white. There is literally no color added to this white. No flake, no metallic, no pearl, nothing. It’s pure. Or at least it was until Mike took it out and treated it like a girl in a red dress on the road course for the first time. 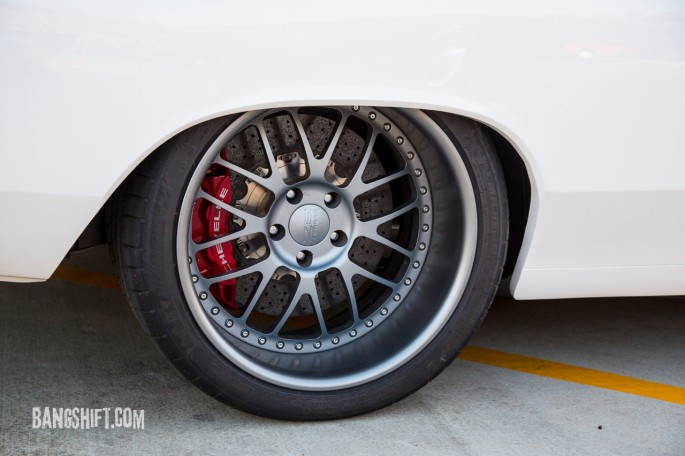 While there are plenty of body modifications, none of them detract from the fact that this car is a 1966 Chevelle. The shaved drip rails, door handles, moldings, and emblems aren’t missed because 400 hours were spent bringing out every detail in the body lines of the original car. Where the limits of sheet metal stamping created soft lines back in 1966, the crew at Timeless Kustoms meticulously sharpened and perfected every gap and line. The air extractors in the hood are the only departure from what GM intended, and are not just good looking. They serve to pull hot air through the grill and radiator and let it out from under that big Chevelle hood. 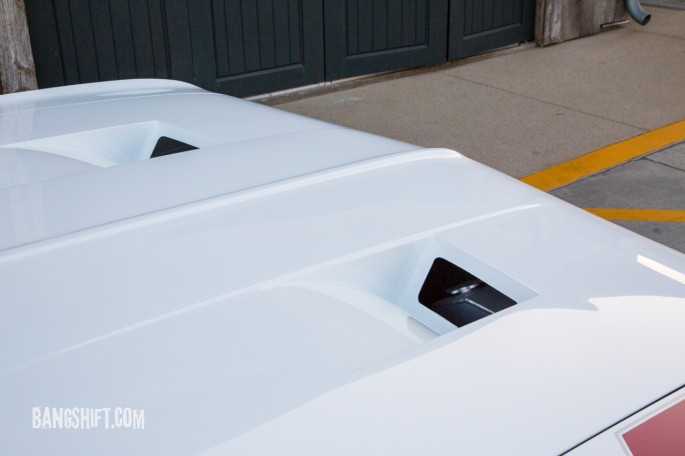 One of the most talked about elements on the exterior of this Chevelle are the Gran Sport inspired stripes on just one front fender. When Mike said that he liked the look of them and wanted them on his car, Jason did some research and found that original reason for the Gran Sport style stripes was so that timing and scoring officials in Europe could keep track of each car as it came by the start finish line. Because they race the “wrong way” around a race track on the other side of the pond, the stripes originally were only on the passenger side (infield side) of the car. Hence the one fender only stripes. 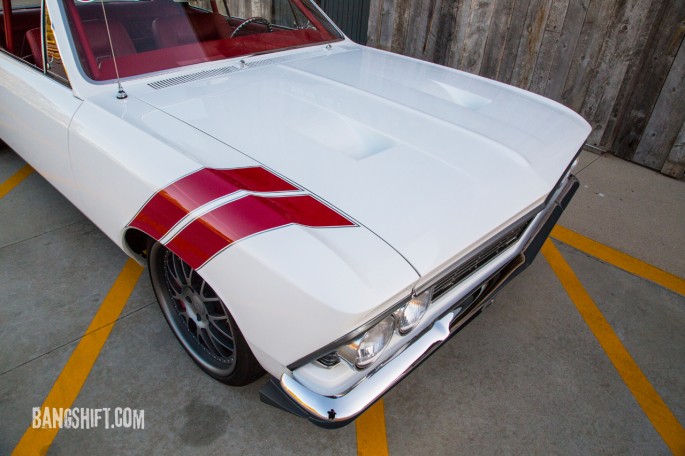 The red interior was touched just as much as the body, and is a striking contrast to the bright white exterior. Because it’s front and center, the custom dash full of Autometer gauges and Vintage Air is one of the things you’ll notice first and tends to be one of the most talked about interior elements. The entire center section of the dash was completely custom fabricated, and is a far cry from the stock long and narrow Chevelle gauge cluster. 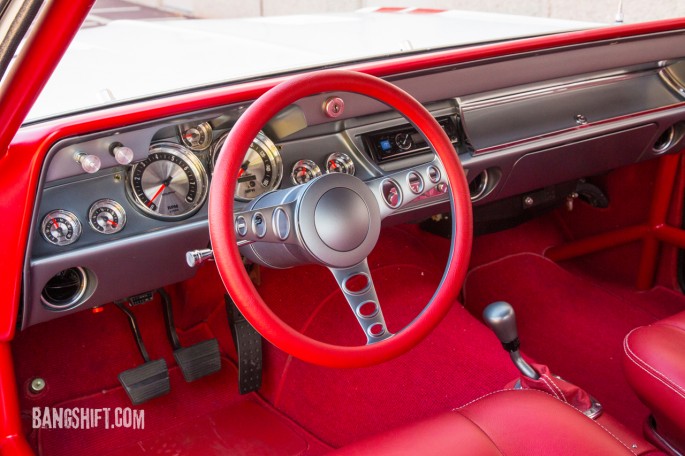 The full 14 point roll cage is also a talking point because it’s so well incorporated into the interior, but it’s not just pretty. Function comes first, and this cage provides safety and rigidity, both important elements in a car that gets beaten on like this one. In fact, the cage supports the steering column and provides the mounting location for the custom brake and clutch pedal assembly. The one-piece headliner does a great job of hiding much of the cage, and Eric Thorsen did an awesome job on the red leather that covers virtually every surface. Cradling Mike’s butt in full comfort are reshaped and bolstered factory buckets and rear bench seat, but for race days a Kirkey vintage bucket, wrapped in the same leather, replaces the drivers seat for safety and extra control. Plus it’s just super cool. 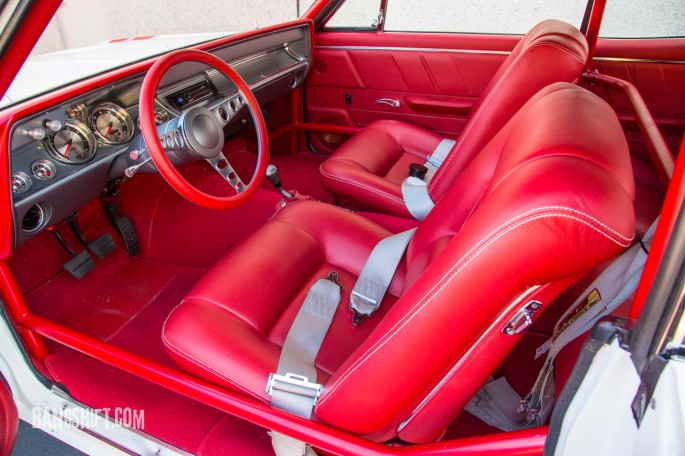 Spread throughout the interior is a complete Focal audio system that features Focal lightweight amplifiers, mids, tweets, and a 12” subwoofer. What you won’t see inside is the raised transmission tunnel and mini tubs that help get the stance just right while fitting the giant Michelins. 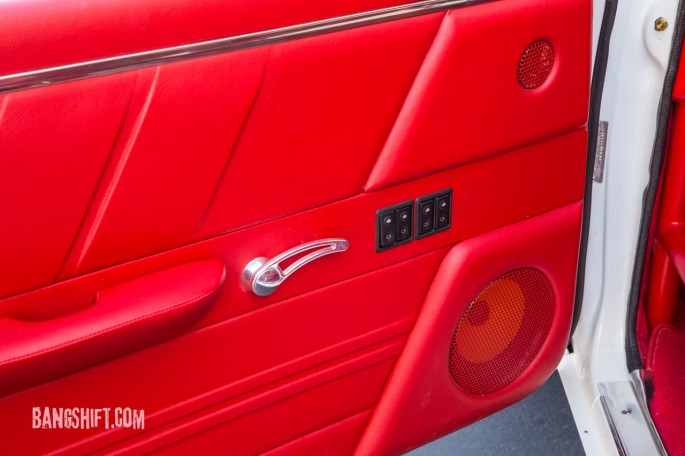 One of the craziest things about Mike Cavanah’s Chevelle is the fact that it wasn’t even supposed to be his. After an impulse buy of a ’69 Camaro on eBay resulted in a car showing up that was anything but advertised, he was referred to Jason at Timeless Kustoms and fully intended to build the Camaro into a typical Pro-Touring machine. But after realizing that “everyone” had a Camaro, and with some gentle prodding from Jason, Mike bought a roller ’66 Chevelle to build as a nice driver for his son, who was 14 at the time. Soon the allure of the Chevelle started pulling on Mike, while Jason was “gently” nudging him, and the Camaro was shoved over into the corner where it still sits waiting it’s turn. Needless to say Mike’s son isn’t getting the Chevelle anytime soon, but as we all know sometimes the car chooses us. We’re glad Mike listened to the call of this particular Chevelle. I’ve built a couple of them myself, and have seen a lot of great ones, but this particular ’66 Chevelle most certainly deserves to be recognized as one of the nicest examples ever. 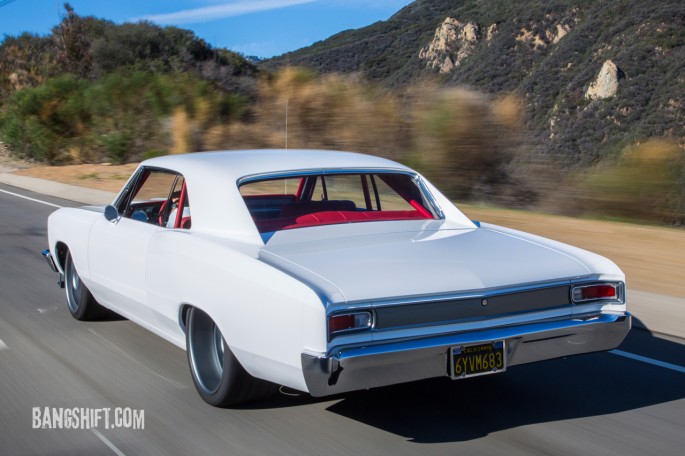 Jason Pecikonis, the owner of Timeless Kustoms wanted us to specifically thank Mike for trusting in him and his team. This was a full-blown project that sometimes had Mike wondering what he had gotten himself into. “I was like a little kid that had to be calmed down because I didn’t want to wait!” says Mike. “I wanted it now, and because this was the first full build I’d ever done it was stressful and a little scary seeing the car get uglier and uglier before it ever got better. At times I was even a little skeptical that it would turn out the way Jason was promising. But Jason not only calmed me down when I needed it, he also delivered more than I could have imagined.”

Jason also wanted to thank his team: Keith O’Leary, Edgar Lamas, Brian Wilson, Eddie Castaneda, Eric Reinertsen, Oscar “The Grouch” Quezada, and Josh Fadgen, for all their hard work day in and day. At Laguna Seca for the USCA race, where the car was debuted, Jason told me that he was upset that all his guys couldn’t be there to see the reaction from everyone as they saw the car for the first time. It was epic.

Action Gallery: Painless Performance Outlaw Fuel Altereds And SHRA Racing From North Star Dragway The Russian GAZ-66 4x4 fills us with want. Watch this video and you'll need one, too