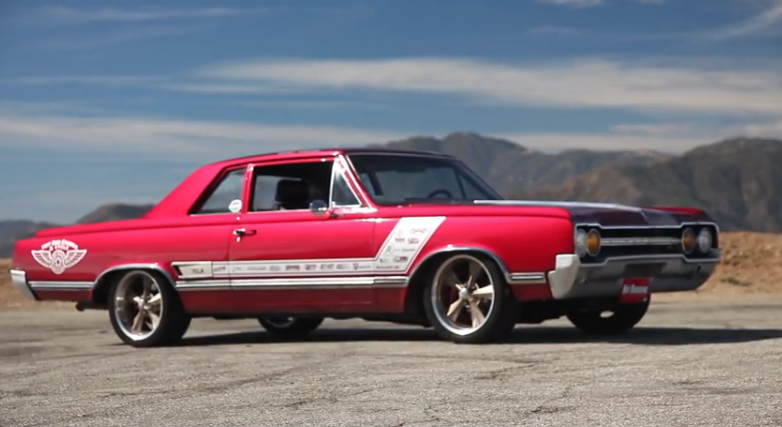 One of the most fun rides I took over my travels last year was in the passenger seat of Robert McGaffin’s 1965 Oldsmobile at the Goodguys autocross in Nashville. I was there to announce the event as Chad had a conflict and we had rain one day. To dry the course, competitors were making slow laps around. I knew Robert’s car and since he was out there, I flashed him a little leg and jumped in the passenger seat. As the course got more dry, the laps got more aggressive and soon enough we were really hauling some ass. As you will see in this video, the car works and it isn’t an insane, over the top build. It is still an a-body with Olds power and that is what makes the thing so neat. The fact that is makes more than 500hp and Robert gets in the thing and drives it like he hates it when he has the chance is even better.

As is the normal case with episodes of Big Muscle, host Mike Musto takes us on a cruise in the car and we learn about how it came to be from McGaffin. It has not been a quick process to get the car where it is today and that may even increase the coolness. Working with some great shops like our pals at Hot Rod Chassis and Cycle in Illinois along with some great vendors has netted Robert a car that can cruise the highways and then hang in there with the big dogs at the autocross. We think that you will dig this car because it has not gone over the top, it has kept with its Olds roots, and it sounds absolutely bitchin’-squared.

Congrats to Robert for having his hot rod on Big Muscle!