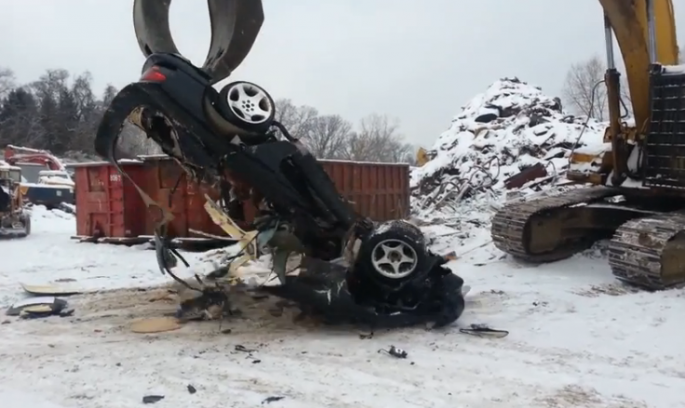 When we heard that Chrysler officials had informed the people who currently possess some 90 pre-production Dodge Vipers that the cars were going to be essentially confiscated and destroyed we were initially saddened but then the opportunists in us took hold and we decided to call Chrysler to see if we could be involved in the completely wanton and wholly unnecessary destruction of these irreplaceable pieces of American automotive history. Who wouldn’t do that, right? Am I right? Anyone?

As Bangshift has continued to grow, it has always been a dream of ours to work directly with an OEM to bring you loyal readers the content that you want. Well, today is the day as Chad and I are proud to announce that we worked hand in hand with Chrysler to set up a live broadcast schedule for the destruction of the remainder of the donated Vipers. Hey, for hundreds of years people would flock to town and city squares to throw rotten fruit at people locked in the stocks and on really special days, watch people get their heads lopped off. Welcome to the future because you’ll be able to do the same thing with just  a couple simple key strokes.

Not to give out too much detail but we have come up with 90+ different ways to kill these cars. Some are fairly simple like painting one up as a Navy ship and floating it close to the shores of North Korea where they will inevitably shoot multiple missiles at it and miss, but the car will ultimately sink after a few weeks. Then there are other plans which are pretty complex and time consuming. We actually came up with one involving sharks and a member of the Muppets cast. We kind of blew the budget on that one so after episode two this whole thing is going to look pretty low rent.

Lohnes and Reynolds are really excited about this opportunity and where it could lead. “It is pretty safe to say that we have some big plans with Chrysler. After all, once they are done with these Vipers, they have a whole freaking museum full of stuff that we can crush, blow up, burn, melt, turn wild goats loose on, karate chop, stage dive onto, lick, dump sugar into the gas tanks of, slowly let the air out of the tires of, wrap in plastic wrap, wire the horn to the brake pedal, and sell to China for scrap metal,” Reynolds said. Lohnes was just excited to see automotive history get made, “The thing is, one very rarely gets to witness something so incredibly dumb in person. Really. None of us were actually on that Italian cruise ship the guy ran into the rocks while trying to get into a girl’s shorts. That was pretty dumb, but purposefully destroying for no apparent reason the most iconic piece of equipment your company has made in modern times, that is rare air. I am especially excited to watch the cars that are being taken away from trade schools and other teaching programs because it is those damned kids and their interest in learning that dooms all of us. Chrysler sees the problem in educating the youth of America, we’re glad for that.”