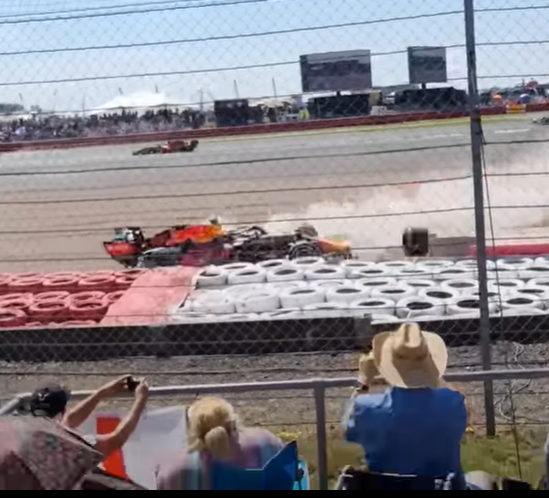 This crash has gotten all kinds of attention because it was during the first lap, it was pretty spectacular from the grandstands, and Lewis Hamilton may the one at fault. Of course all of this is super controversial and everyone has an opinion. But what we know for sure regardless of what anyone says is that Max was hauling ass when he went sliding across the gravel with one wheel hanging by a tether. He had no control at all by then and the car made a long sweeping slide and then spun just before burying itself into the tire barrier right in front of a group of spectators. To say they were excited, scared, and surprised would be an understatement. Listen to the video, watch the reactions, and remember that there is a lot of dust, pieces of gravel, and arguably a lot of small bits of carbon and whatever else that are coming off this car as it is sliding and them makes a really hard hit into the tires.

Max was taken to the hospital after this crash to be assessed but had no major injuries and will make a full recovery. It was just one of those racing things, but they are going to be talking about this one for some time because of the players involved.

Below is the video, and then here is a link to the story from F1, including all the other video angles, and opinions from all kinds of “experts” as to what really happened here and why? Oh, and who’s fault it is.

How To Win Class 1, And Finish 6th Overall, At The Baja 500 In A Bad Ass 2-Wheel Drive Buggy I've Always Wanted One Of These Import Mini 4x4 Trucks, But What's It Really Like To Get One?