In Car Video: An Aussie Falcon XY-GTHO Carves Through the Field at Bathurst

Jun 08, 2015Brian LohnesApex Spotlight, Apex VideoComments Off on In Car Video: An Aussie Falcon XY-GTHO Carves Through the Field at Bathurst 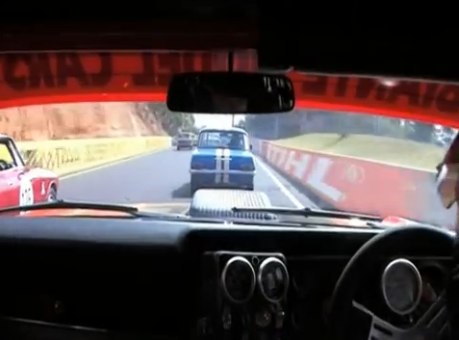 When is comes to Australian muscle cars, few have the type of mythological aura around them that the 1971 Ford Falcon XY GTHO. Rated by Ford at 300hp, reality was that the 351 Cleveland was good for 380-390hp right out of the box. The HO designation stood for Handling Option and it included a very heavy duty, race inspired suspension. The cars were sold in limited volume and were built so that a race version could be put into the hands of the Ford factory drivers. Alan Moffat, the car won the 1971 Bathurst 500 and was a force to be reckoned with whenever it turned a wheel in anger.

That last statement holds true today as you’ll see in this video. Racing at a vintage event at Bathurst, this car and driver start at the tail end of the field an in a masterful display, carve all the way to the front in nine kick ass minutes. Crank the speakers and watch this car and driver simply go to work. Also keep your eyes peeled for some cool stuff like Lotus Cortinas and a another awesome Aussie machine, a Chrysler Valiant Charger powered by the wicked “Hemi six”.