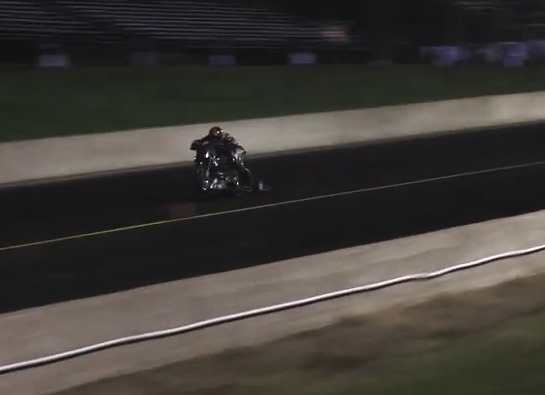 Larry “Drums” Brancaccio suffered what has to have been both the most painful and the most harrowing incident of his career a couple weeks back at the IHRA Cordova race when his nitro Harley ran off the end of the track at a terrific rate of speed and left him literally broken. This video is so insane to watch because of the speeds, the intensity, and the danger involved. When one of these motorcycles runs well over 200mph and has a problem, they eat up the shutdown in no time, as you will see here. How bad was Drums hurt? How about a broken shoulder, arm and wrist, 4 compound fractures in foot and brain bleed? That is a bad day in the exciting life of a nitro Harley rider.

No official statement has been made about the cause of the crash and we are not going to star speculating here but one thing we do know is that when he went off the end of the track into the gravel “suppression area” at Cordova and disappeared into the blackness, it was no easy task finding him. It is incredible that his condition was not any worse than it has been reported as being.

This video is further proof that nitro Harleys are an “edge of your seat” style of class and that they are among the most difficult and unpredictable vehicles in the sport of drag racing. Drums has been at this for a long time and we’re going to bet that this was a ride he’d never like to take again. The truly scary thing from our perspective is the fact that it was so dark where Brancaccio went into. It was as though he were swallowed by the depths an would never be seen again. Crazy!

PRESS PLAY TO SEE A NIGHTMARE UNFOLD BEFORE YOUR EYES – NitroAmerica!

In Car Video: An Aussie Falcon XY-GTHO Carves Through the Field at Bathurst Watch Four Humvee Trucks Get Sucked Out The Back Of A Cargo Plane With Parachutes - Very Cool Stuff