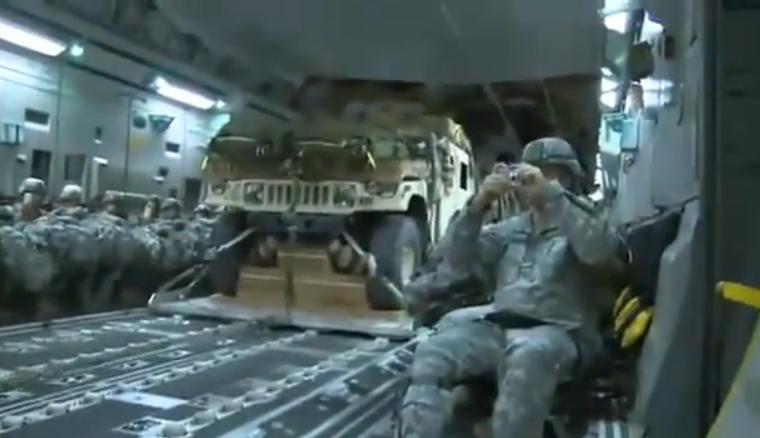 The biggest job the military has is to get the guys fighting the supplies and equipment they need in the quickest, most efficient way possible while making sure said stuff actually gets to where it needs to be. In this video we see a prime example of that as four large Humvee trucks are sucked out the back of a cargo plane as a load of soldiers look on. We have seen single trucks sent off into the wild blue yonder previously but never this many. It is really neat to see them get yanked off the plane and then disappear into the blackness of the night sky.

We’re not sure if the guys riding on the plane then followed the trucks to the ground but we tend to think not because as the video ends you can see the cargo door starting to close up so perhaps the passengers were heading to another destination. The trucks weigh on the order of 10,000lbs a piece so we’re talking about 40,000lbs of truck! We believe that the plane is a C17 which is manufactured by Boeing. The plane has a cargo capacity of 170,000lbs, so the four trucks you’ll see here are barely making the thing break a sweat. When fully loaded, the C17 weighs nearly 600,000lbs and can fly about 2,800 miles on a full tank of gas.

For the guys on the plane, this was another day at the office. For guys who have never seen anything like this up close as this video takes us, it is beyond cool. Once the first truck “leaves the building” you’ll understand why all the men on the plane are pretty tightly tucked into their seated positions. Imagine getting something so much as a shoelace caught up in this operation!