Classic YouTube: Watch As Theirry Neuville’s Rally Practice Gets Interrupted By A Tractor 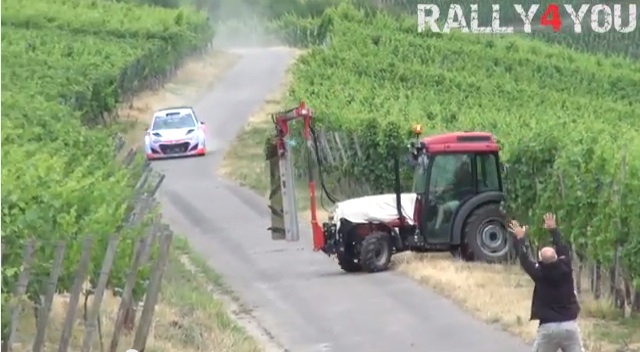 When you’re running a WRC car at 10/10ths, the absolute last thing you want as a driver is a surprise. Your co-driver should be streaming out the pace notes and you need to concentrate 100% in order to keep the rubber on the part of the road you are supposed to be on. Your reactions have to be fast even by race car driver standards…telepathy might not be quick enough when things go haywire. We’ve been lamenting people on the race course before, as people have done for decades, but all things considered this could have been much, much worse. During a test pass for Rally Deutchland back in 2015, Theirry Neuville and co-driver Nicolas Gilsoul were running at full-speed when a tractor emerged from a field and straight into his path. Brakes? Yep, he’s got ’em, and he’s probably thanking any and everybody who has worked on them. In less time than it takes to shout out “Oh, Scheiße” Neuville stomped on the brake pedal and brought his Hyundai i20 WRC down to zero before the farmer ever knew what was going on. Anybody want to guess on who was more surprised in this situation?