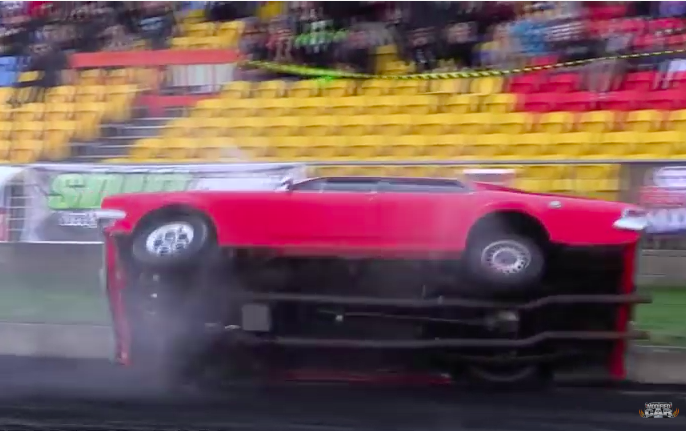 There’s an art for pretty much everything to do with the automobile. Even stuff like burnout contest have a right and a wrong way to participate and this video proves it. Filmed at the Brasher Nats last year it shows a beautiful looking Aussie sedan with a huge blown engine in it getting ready to completely kill a set of rear tires on the well used burnout pad. You can see and hear the driver feathering the throttle to get the tires boiling but the smoke never really comes and before he knows it, this guy is on a bad collision course with the wall. The car hits HARD and then manages to get upon its side. In America that guy would be on the high side of this one but in Australia the driver is only inches from the pavement before this one slams back down onto four wheels.

Undoubtedly you’ll notice two things about this car. The first is the name of the thing which can be seen on the license plate “METHDP” and the second is the writing on the back window which  reads: I don’t turn heads, I snap necks. He’s right, unfortunately the neck was almost his own!

Here in the USA about the only bad thing you’ll ever see happen to someone’s car during a burnout contest is a rear tire exploding and mangling a quarter panel or something. Being that our standard operating procedure is the stationary burnout we rarely get to see craziness like this. When you think about why people love the burnouts over there it is pretty simple. You never know what is going to happen next. Guys set stuff on fire, they crash, they blow the superchargers off, and until the tires explode the craziness does not stop.