Check Out This Collection Of Amateur Rally Drivers…Not One Crash But A Lot Of Close Calls! 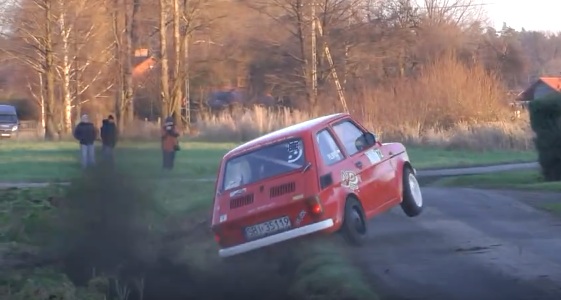 There are a lot of times that putting the word “amateur” before a profession invokes a heightened level of fear. Would you risk eating the creations from an amateur sushi chef? Not unless you have nowhere to go for the next couple of days, and might I suggest staying the hell away from the fugu. How about an amateur dentist? No, no and HELL no. I’ll just pull the bastard out myself using a string tied to the bumper of my car with my wife matting the gas pedal…it will be less painful. I know that everybody has to start somewhere, but that doesn’t mean that you should admit the fact…it might hurt business if you refer to yourself as an “amateur proctologist”.

That being said, none of the drivers you will see in this video deserve the “amateur” rally driver tag. These guys drive their asses off in cars that, for the most part, were never meant to rally. Sure, there is the occasional Subaru, but watching a Honda Civic and Fiat 126 blitz down wet roadways that are as wide as a shopping cart without an accident is impressive. One false move and you would end up in the trees and the car would end up as a modern art masterpiece. These guys ARE rally drivers, and good ones at that.

More Cool Iron From The Pomona Swap Meet - Check Out Our Latest Photos Here East Coast Drivers: Here's A Bunch Of Videos That Show You How NOT To Drive In Weather

3 thoughts on “Check Out This Collection Of Amateur Rally Drivers…Not One Crash But A Lot Of Close Calls!”