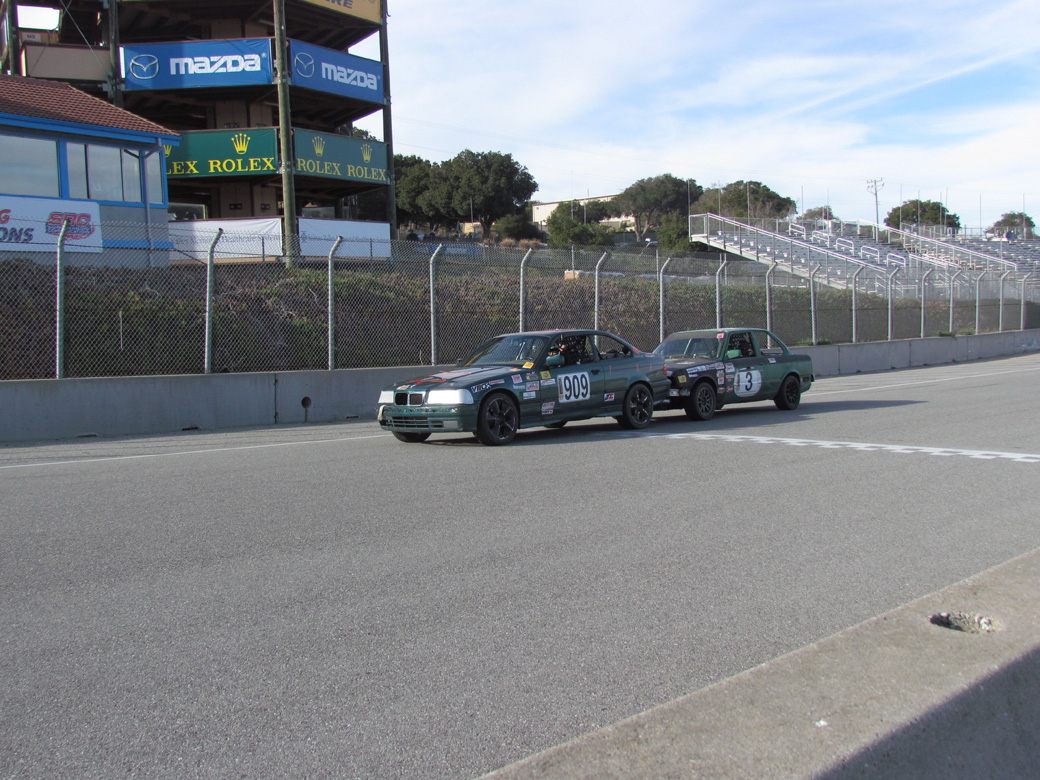 The Optima Batteries ChumpCar World Series (www.chumpcar.com)traveled to the world-class Mazda Raceway Laguna Seca, located just off of the coast of Monterey, CA to kick off the West Coast Region 2014 Season Opener with a 6-hour endurance race.

This jewel of a road course is 2.238 miles in length with 180 feet in elevation change. It has eleven turns, including the famous “Corkscrew” at Turns 8 and 8A. What makes the Corkscrew a one-of –a kind turn in motorsports, with the hard-left and hard-right combination is the elevation change… equal to descending a 7-story building in less than 10 seconds and in less than 450 feet of linear track. The entry is a 12 percent drop. Once the racecar reaches the apex of Turn 8A (the right turn), the grade increases to 18 percent. Once you have maneuvered out of The Corkscrew the elevation falls another 109 feet between Turn 8 and Turn 9.

For some, conquering The Corkscrew was the biggest challenge awaiting them; for others the biggest challenge was off the track.  “The Flyin’ Hawaiians & 2 White Guys,” a team competing with a Datsun 280ZX, experienced a handful of trouble before they event got to the track. Their initial goal of getting to the track and be first in line for tech (in order to obtain one of the free batteries being giving out by ChumpCar’s Title Sponsor—Optima Batteries) were quickly dashed as the tongue of their trailer broke-off 10 miles before the raceway. Finding a trailer hitch installation shop cost them 2 hours of repair  time but, luckily, they did receive the free battery and had a smooth day of racing… coming in 9th place for the day! 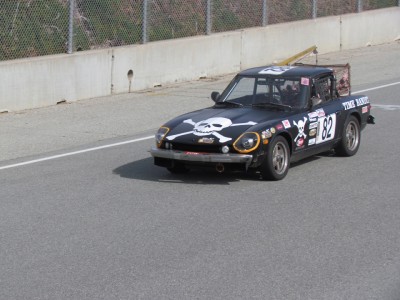 As the gates opened, the hustle and bustle broke out as ChumpCar teams scrambled to make last minute adjustments and fine tune their race strategies.  At ten-o’clock cars were on grid and soon doing their parade lap.  But, as more bad luck would strike, the 1983 Mazda Miata of Leftover Parts Racing had to be towed in before the green flag was brought out.  After a quick look under the hood and fixing a loose clamp on the water hose, they were able to get back onto the track just in time to catch the green flag.  Thirty-nine cars took the green flag and it didn’t take long to realize that the West Coast Chumps didn’t suffer from ‘WRWS’—winter racing withdrawal syndrome—as claimed by some their East Coast Chumpadre’s at last month’s Road Atlanta event.

Within a few laps, everyone seemed to settle-in and get their racing rhythm back.  But, as always, there were a few mechanical issues that cropped up.  Shortly into the race, car #717 (Pony Express Racing in a 1990 Ford Mustang) came in, the driver reporting that they were done for the day with a broken differential.  A more detailed inspection identified the problem was in the brakes.  A 30-minute repair and they were able to get back out onto the track. Several other cars were in the paddock area trying to fix fuel pumps and clutch issues.  Only 2 cars suffered “catastrophic failures” — a blown engine and a broken constant-velocity joint.

Car#130 of Off-The-Scale Racing, campaigning a 1985 Mazda RX7, was not about to give up the fight.  Their transmission was slowly failing, requiring a serious change in race strategy.  Their “flat-out racing” plans changed to “nurse the car around the track,” in hope just to take the checkered flag.

It didn’t take long to see who the challengers were going to be.  Trading places throughout the day for the top five positions was car #525 (If It’s Not Punk It’s Junk Racing) with their well-worn 1992 BMW 525i and car #117 of Fear The Tree, driving a Mazda Miata, followed by Lamborarri ( Mazda Miata), Marvin the Martian Racing (1991 BMW E30 318is), and Gentlemen Geoffrey’s Motor Club (2002 Mercedes C320).

For anyone that is involved in motorsports, either by being a driver, crew, spouse, spectator, or even event staffers, there is one thing that is shared more than any other sport – 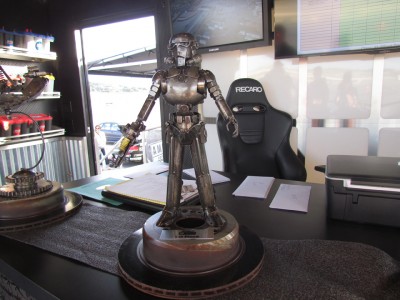 comradery.  Call it what you want… community, fellowship, society and just great friendship.  Regardless of the term or what type of racing one does, when your fellow competitors are helping you put your car back together in order to get back out on the track, that really shows the great sportsmanship we all share.

At Laguna Seca, there were several examples of such sportsmanship.

Perhaps the best example was Team Lamborrari who, after paying for their car entry, was unable to get their car completed in time for the race. In steps Parabellum Racing – a solid, long-term ChumpCar team –who LOANS them a car.  They cobble together a team and, with two completely inexperienced drivers and one seasoned driver, manage a third place podium finish!  All of this thanks to Parabellum Racing who worked the pits and supported the entire effort.  That, my fellow Chump, is comradery.   Or, better yet – it’s just ChumpCar.

As the checkered flag dropped and cars began crossing the finish line, the car of Turdmeister Racing Group #1 (a 1992 BMW 325i) lost power about 500 feet from the finish line.  The car was coasting up the hill towards Start-Finish, inching closer and closer.  Spectators lined-up along the wall for the finish and were cheering the car and driver, hoping that their cheers would help propel the car over the finish line.

Running out of momentum, the car stopped about 100 feet from the finish line.  As it sat on the straight-away, the team car of Marvin the Martian Racing, who ended up in fourth and might have lost a position, slowed up behind the Bimmer and pushed the car over the finish line. To Marvin the Martian Racing, it wasn’t about what position they finished — it was helping out a fellow racer.

The race ended with 25 cars still on the track.

THE OFFICIAL RACE RESULTS WERE:

The Optima Battery ChumpCar World Series would like to thank all of its sponsors, Chump drivers, and Chump fans.  We would not be able to do this without your continued support. 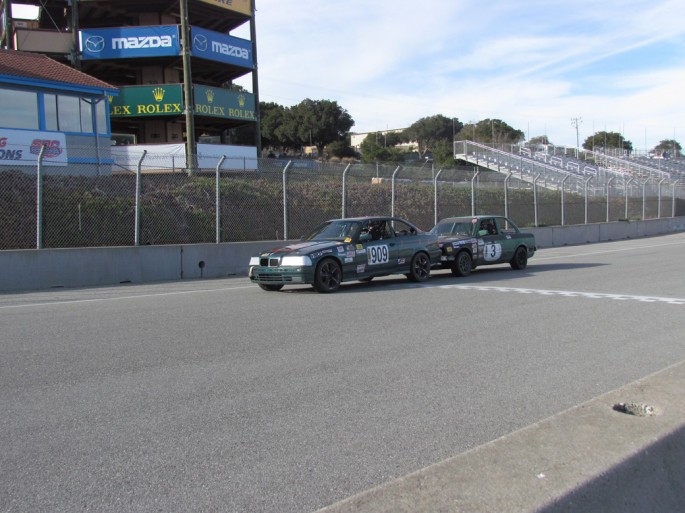 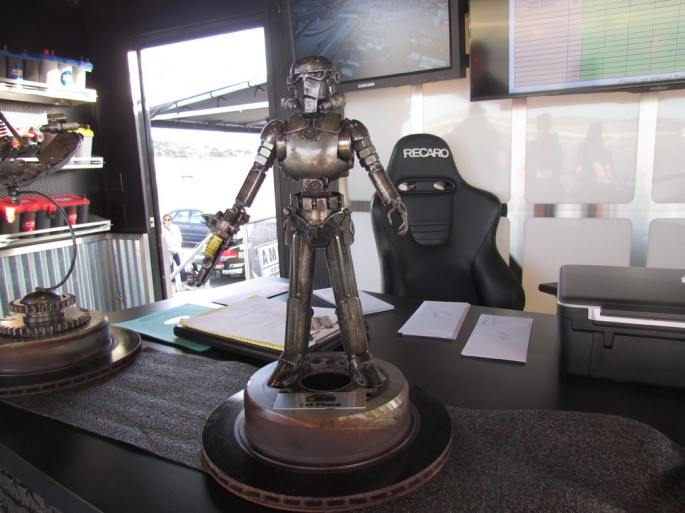 Petrolicious Video: A Man And His Car Roadtrip The United States Barnstormin': Always An Adventure - Five Days In Bakersfield