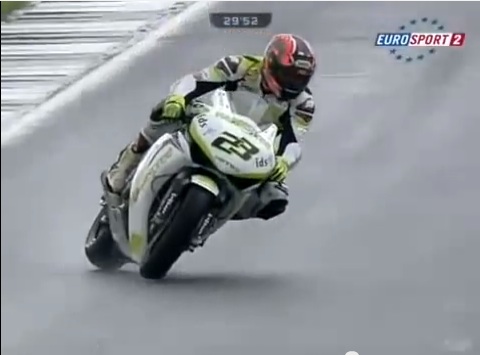 A racing superbike in dry conditions is already a handful, requiring reflexes that border on supernatural. If the tires don’t grip, if the rider’s balance gets upset, if anything is less than perfect, man and machine both will pay a price. Riding one in the wet at 100% effort doesn’t just push the boundaries of sanity, it stomps on the line before skipping merrily past it altogether. Mind you, it can be done, but you had better know your bike well before you try that stunt out. You can lay the bike down and slide on your ass into the gravel trap, or worse, you can high-side the bike, get catapulted into the air, land, and continue on into the gravel trap. It’s your call.

The rider in this footage is Ryuichi Kiyonari, and by this point in 2008 had a good background behind him, including first-place championship finishes in the All-Japan Road Race ST600 class and British Superbike. 2008 was the first year that Kiyo switched over to run in the Superbike World Championship, running a Honda CBR1000RR. He hadn’t won a race in the series yet, though he had gotten an extremely close third place finish at Monza, and was anxious to get going. He had lost the first round at Donington, but race #2 was a rainy disaster. Kiyo ran hard, and got his first World Superbike win at the second race, in the wet. And he did it riding like he did in qualifying:

(Thanks to John Howe for the tip!)

Hellcat Hauler: Tell Me You Wouldn't Swap A Third-Gen Hemi Into This 1992 Dodge D350! Brutally Cool: This Classic Toyota Corolla Is Packing A Turbocharged Nissan RB Engine And It Is Awesome