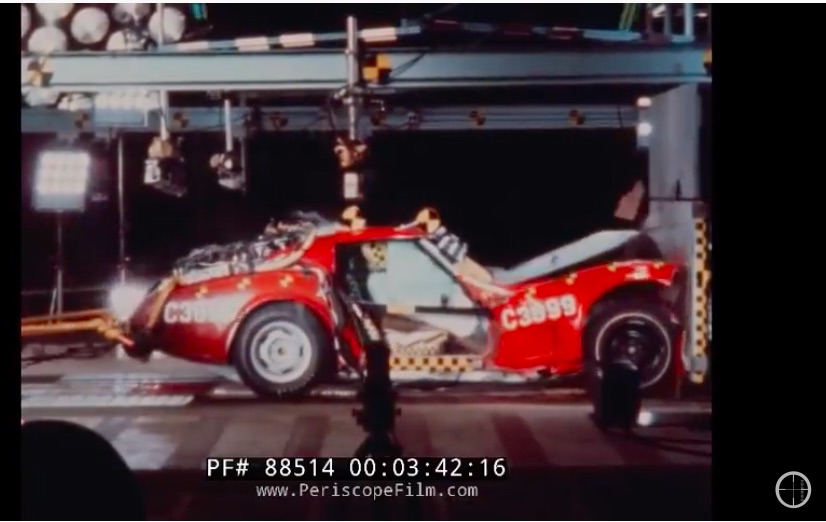 Few people remember that General Motors was the major pioneering force in the develop of air bags in passenger cars. They actually offered them as an option on several models for a couple year stint back in those days of malaise. After the 1979 model years the airbags went away after the company’s 80-million dollar investment did not pan out at all in terms of the volume of people who were checking the option box for what was then a pretty wild technology. Even today air bags are a marvel but back when Gerald Ford was in office? This was freaky!

While the company never offered air bags on the Corvette, this video is proof that they had engineered them to work in the car or had at least invested in developing the system. We’re not sure why they wouldn’t have worked the air bags into the options sheet for the Corvette. It seems to make sense that you’d want the people in your high performance, fastest in the line car to have the best safety. Maybe it was weight, packaging, or the fact that knew no one would pay for them, but the ‘Vette did bot get air bags for years and years into the future.

So, did they work right? Yes they did and that was the wonder of it all. When these systems were developed in the 1970s they were the most advanced electro-mechanical thing anyone had ever installed into a car, let alone made work and offered in any sort of production volume. The robustness of their construction was proved a few years ago when a magazine located two 1970s Impalas that were air bag cars and they dragged one out of a junkyard and another out of a barn. Both cars were crashed and both cars had perfect air bag deployment. Incredible.

Press play below to see this 1973 Corvette get crash tested with air bags! Who knew?

Looking Back To Look Ahead: The 1993 Land Cruiser J80 Still Stands As A Really Great Example Of The Quintessential SUV Classic YouTube: Going Full-Vertical In A Blazer At Bowling Green