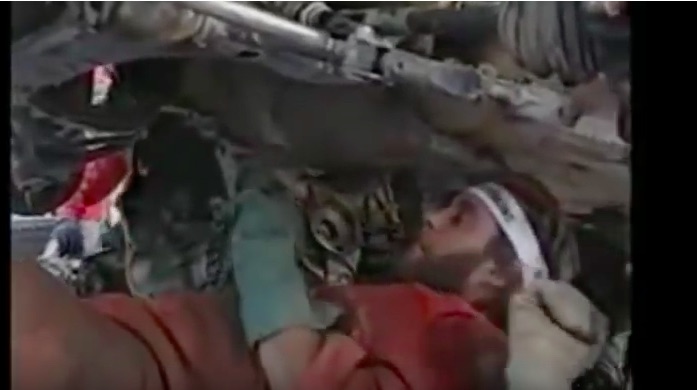 While on a pound for pound basis, we’d never throw down against a professional drag racing crew in a contest of completing the most work in the least amount of time, this Audi rally team video is incredible for what they pull off. You are going to see the Rothmans sponsored Audi Quattro competing in a rally through the country of Jordan back in like 1987 stop on the side of the road and then get torn apart, put back together, and drive off in like six minutes and change. These guys do this work IN THE STREET. They are not in a garage, in the pits, in their shop, nope they are in the damned road and boy do they hustle. Remember, this is an all wheel drive rally car, not a 1969 Camaro we’re talking about here.

One of the things that is so incredible about this effort is the level of thrash and coordination. This is a very impressive and highly complicated job by the looks at it. There are a bunch of guys attacking the car from the top, bottom, and sides. The real hero (to us) is the dude flat on his back that yanks the gearbox out and kind of chucks it to the side. He then muscles the second one into place using his arms and legs! Again, this is all done with the car barely high enough off the ground to get the new transmission slid under it and the whole job is done with hand tools.

The only crummy thing about the video is that the sound quits at like 6:30 but by then the work is done and the guys are basically just waiting to see the car drive off. Motorsports teams are amazing in their abilities and that goes across the board. These guys played it pretty cool but we were fist pumping for them when we saw how well they handled this job.

Testing Different Jacks With A Massive Hydraulic Press Is Absolutely Awesome Flamin' Nightmare: Watch This Power Stroke Ford Go Down In Flaming Glory On The Dyno