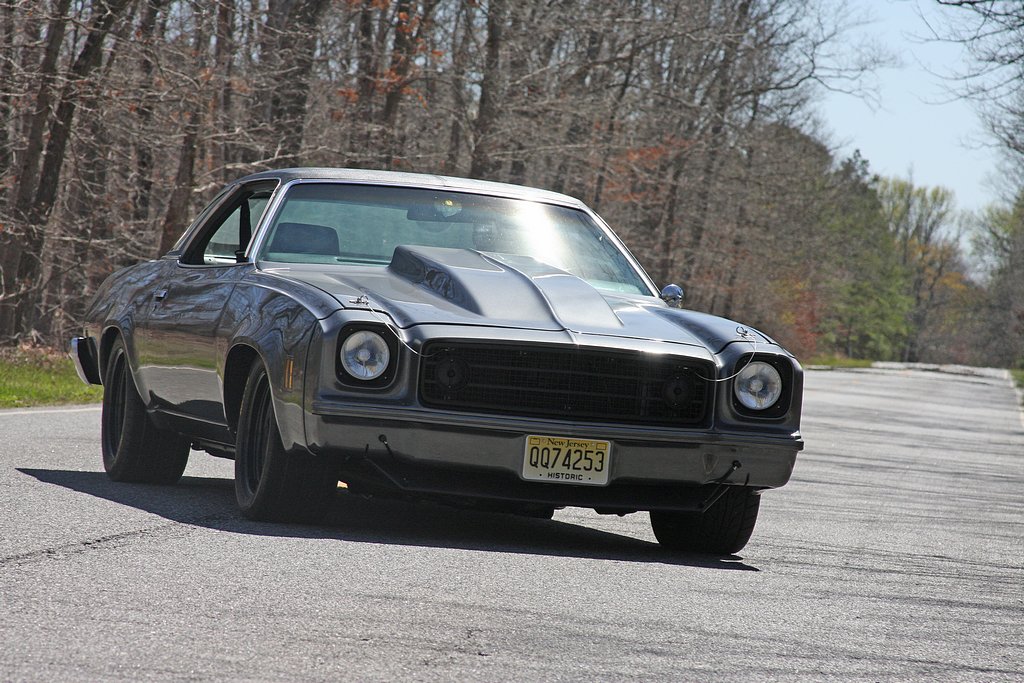 There were some truly incredible rides at the 2012 Run to the Shore event held at New Jersey Motorsports Park in April. We oogled the likes of Billy Utley’s all conquering Nova and Jeff Schwartz’s uber-bitchin’ Tempest, but it was this 1973 Chevelle of New Jersey’s Sean Rich that really spun our crank. This is a relatively unloved body style elevated by a guy with a great eye for subtle touches. The car is underpinned by a suspension that is effective but not capable of bankrupting a village and has a drivetrain that any BangShifter worth his or her salt could make work for short cash. It is everything cool we love about the car hobby because the ideas and the work were all generated by the hands and brain of the owner. A Pro Touring style 1973 Chevelle? This thing is as right as rain in our book.

This is one of those “first car stories” because this Chevelle was in fact, Sean’s first car. The Chevy was sitting in front of a house that Sean saw from the window of his bus going to school at the Vo-Tech every day. As it got closer and closer to the time he would be driving, Sean got more and more antsy to learn about the big Chevy sitting there all alone on the side of the road. As luck would have it, one thing lead to another and he was able to procure it for $1200. The car ran and drove, although it didn’t drive all that fast with a 2bbl equipped 350 motor and Turbo 350 transmission. As Sean tells it, the car was a dog and a half, but it was a dog the he loved and it served him well. Hell, this thing may have actually saved his life at one point.

Sean was hit head on while driving the car and it sustained some major league damage to the front end. He was an innocent victim, sitting at a traffic light one second and then watching a horrible accident unfolding in front of him the next. One of the cars in the wreck ended up as an unguided missile which unfortunately collected up Sean’s Chevelle and left him dazed and confused at the scene. The cops actually had to ask him to shut the car off because he was in such a state that he climbed out with the engine still running.

That would spell the end for most kid’s first cars, especially those kids that drive vintage iron but the Chevelle lived on. Sean was working an apprenticeship as part of his Vo-Tech high school education and he happened to be working it at Gary Betsy’s Performance Restorations, a shop known all over the country for their custom work and high quality restorations. Because of this, he was able to fix the car and get one hell of an education in the process. He still counts the guys at the shop among his best pals and for good reason, obviously.

With the car fixed, a Jasper replacement motor and four speed installed, Sean cruised and occasionally drag raced the car and then he went off to college. He describes the college period as a low point in his ownership of the car because he was a typical broke kid and the car became a bookshelf, garage art, stationary object, insert your name here for an unused hot rod here. Again, lots of cars suffer this fate and their owners move on to other interests. Not this Chevelle. Fresh out of college, Sean was determined to revive the car and he went right into it, promptly melting the wiring harness by the starter. That was the trigger for him to really tear into the car and start making the changes, gradually, that would bring it to what you see here before you. We like this guy.

We’re going to tell you the story of the car through photos and captions, so scroll down and read the specs, details, and finer points of this totally bitchin’ Chevelle. 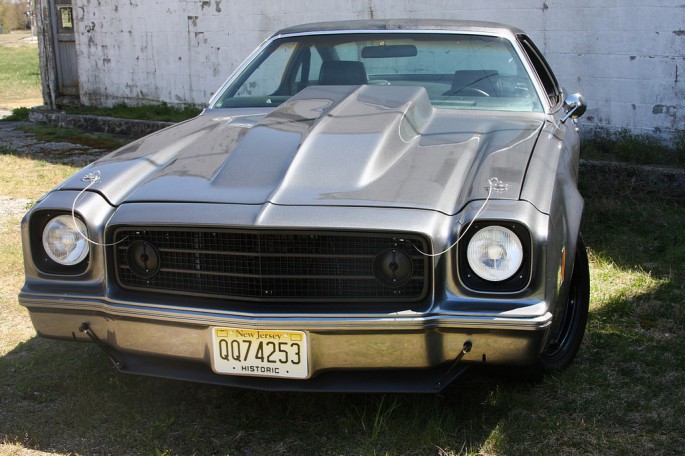 There’s little doubt as to why we immediately fell in love with this car. Sean is a designer by trade and his taste and attention to detail can be seen all the way through this car. By blacking out the grill and headlight surrounds, it totally cleans up the look of the front end. The real Baldwin-Motion cowl hood is an incredibly rare piece. 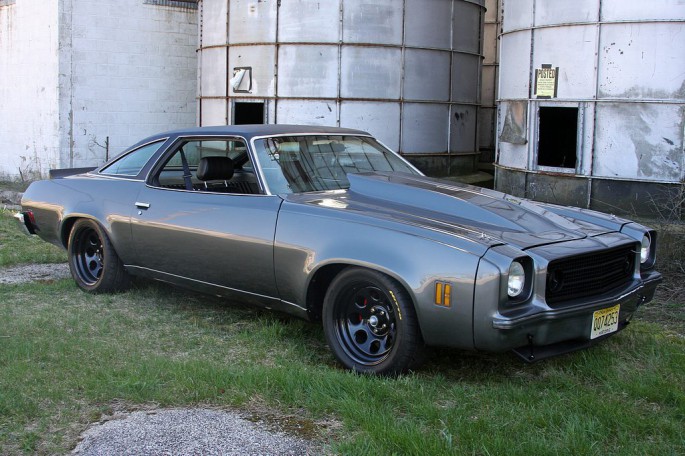 A look at the whole car gives you the complete picture of the styling touches that Sean added. The chin and decklid spoilers are pieces intended for Camaros. He used the chin spoiler unaltered but the deck lid mounted piece is a 1969 Camaro part that he lopped three inches off of on either end to keep it only as wide as the trunk lid. Small touches that are totally bitchin’ and add so much to the overall appeal of the Chevelle. 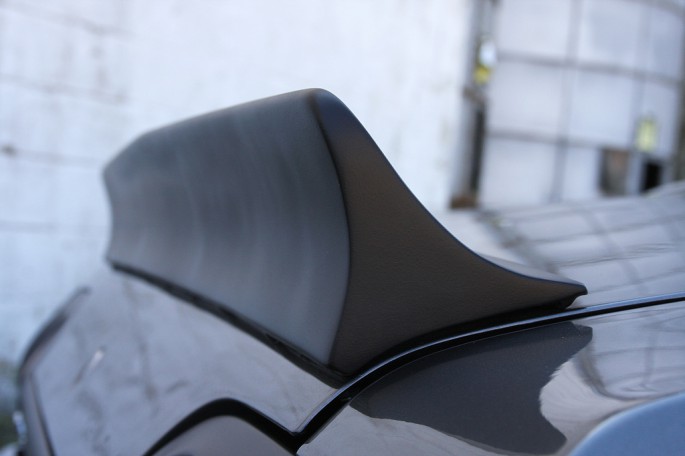 Best use of a 1969 Camaro spoiler we have seen in some time! 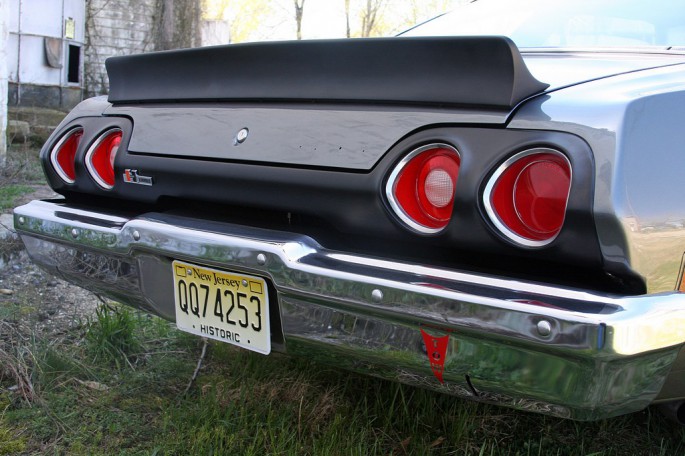 This era of Chevelle is still pretty unloved, but with cars like this coming down the pipe, we can see that changing soon. It doesn’t take much to improve the looks of them. The rear of this car looks about 500% better than stock. 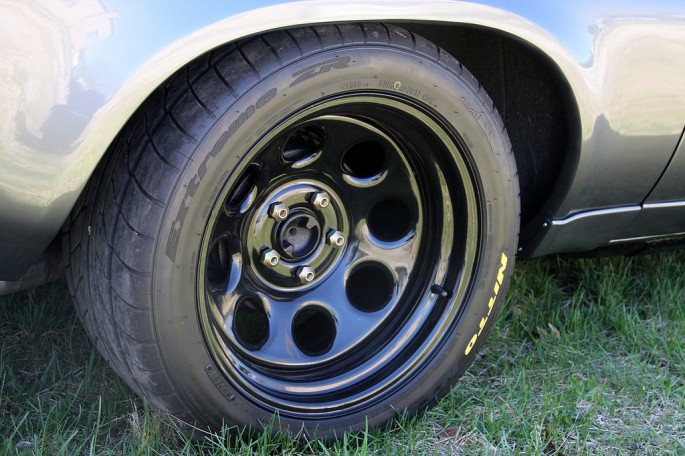 We’re huge fans of Cragar Soft 8s around here. They look totally bitchin’ on this car. Yes, they are heavy, but whatever. Sean spec’d 17×9 wheels and had the rears widened out to 10 and a half inches. He is now going to swap those ten and a half inchers to the front and put a set of eleven inch wide wheels on the back wrapped in massive 315/35/17 tires! Currently the car wears 285/40/17 all the way around. 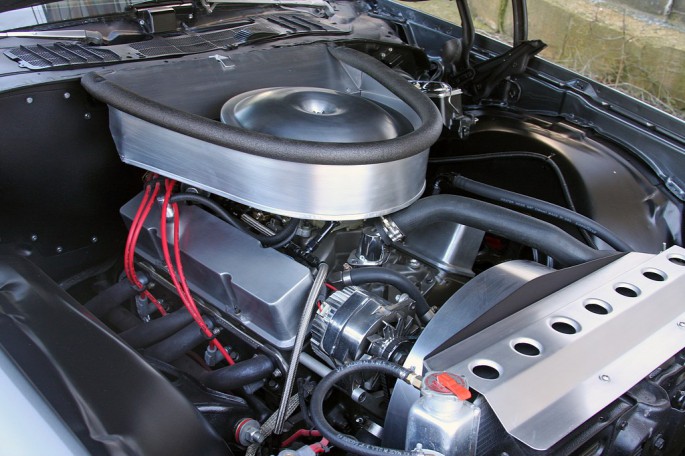 The motor in this car is so simple it is great. The bottom end is the same Jasper re-man short block that has been in it for a decade or so. It measures out to 355ci and has 10:1 compression due to the World Sportsman II iron heads on top. A Comp 286 Magnum cam rolls in the block, an Edelbrock Performer RPM and Holley 650 double pumper feed the need, with cheapie no name headers carrying the gasses away. The cam and head combo make this thing a revving machine and it really pulls hard in the 6500-7,000 RPM range. It sounds and looks the business as well! 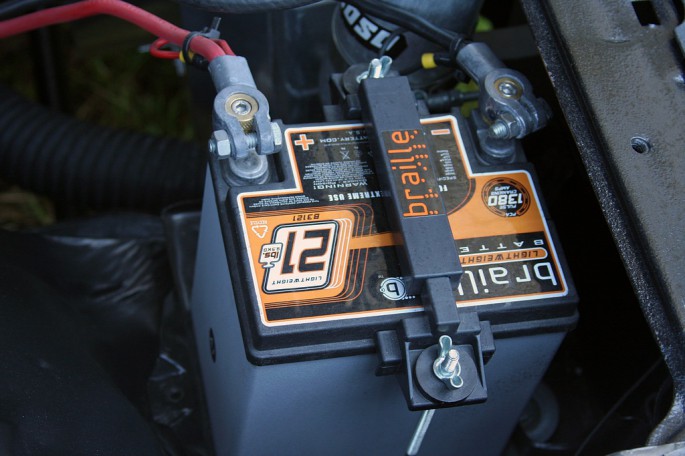 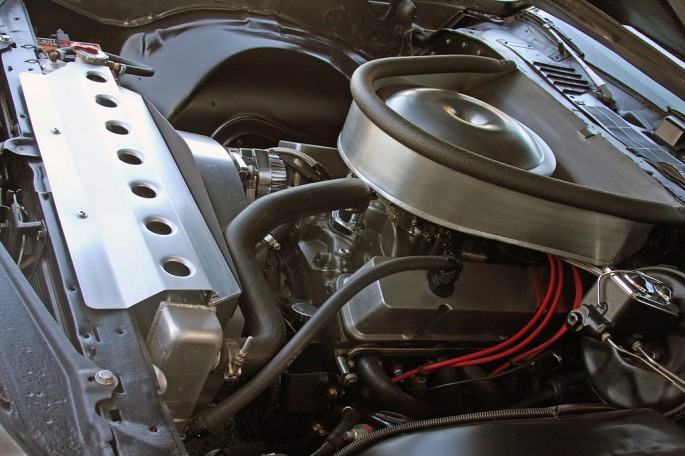 Again, we look at the details. Sean designed the plate above the radiator and Gary Betsy punched it. Sean also designed and built the cool cowl air box. It is all clean as a whistle. 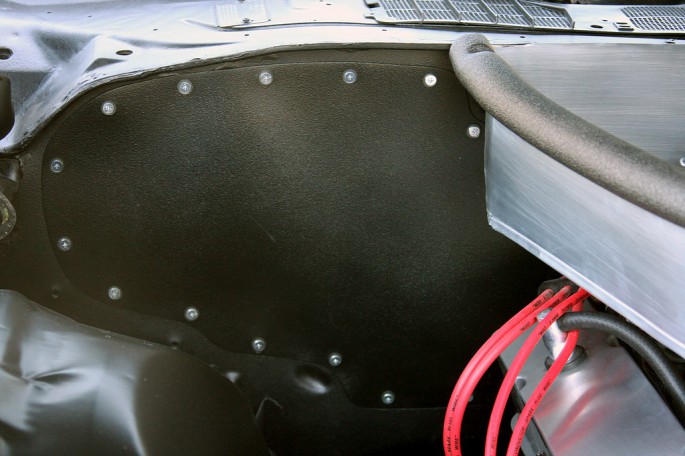 While there are probably cool mornings that it sucks not to have a heater, the engine bay looks a lot better with this clean block off plate rather than the big dorky heater box. 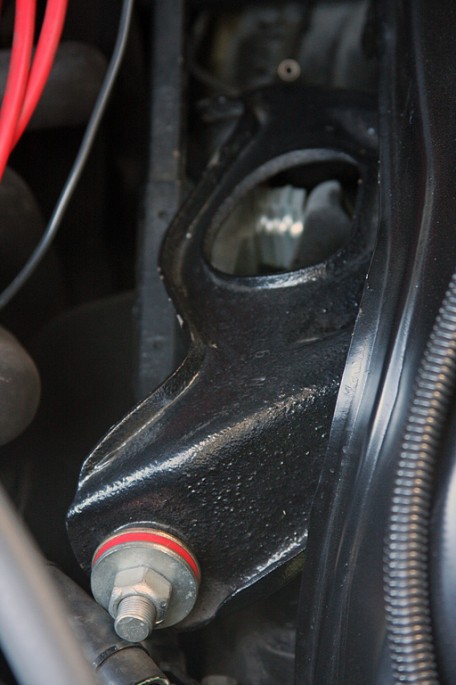 As we’re dubbing this a “working man’s” Pro Touring car, you’ll see that Sean kept the stock A-arms. They have been upgraded with Polyurethane bushings and better hardware along with Global West offset cross shafts that allow a lot more camber to be dialed into the front suspension. We dig the fact that this car doesn’t have custom fabbed stuff all over the place. 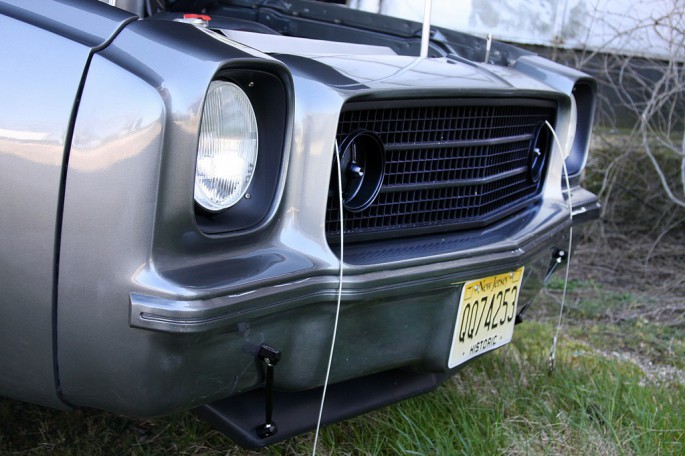 One thing that this car isn’t nor will it ever be, is light. Sean thinks that the Laguna nose alone weighs something close to 300lbs. It looks cool as hell, but it is hefty! The whole car weighs in at around 4,000lbs. 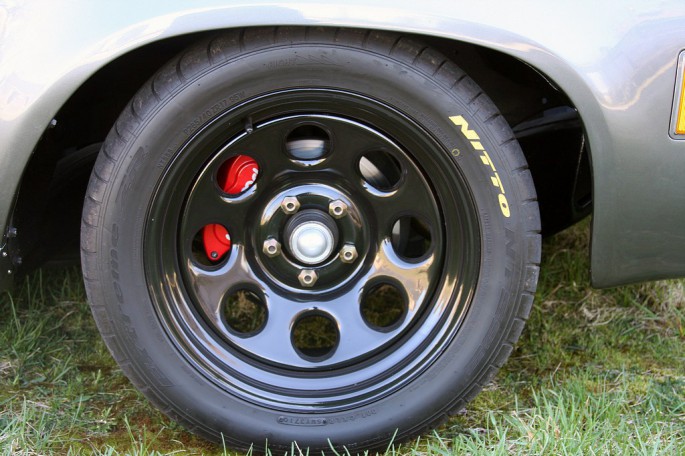 Wilwood disc brakes live up front and at the Run to the Shore the car had stock drums in the rear. That is getting ready to change though and Sean will be working on rear discs soon. The front rotors are 11″ stockers and get squeezed by Wilwood 2 piston calipers. The rear axle is a bit of a werido piece from a 1973 GTO. The 40 year old posi unit still works great! 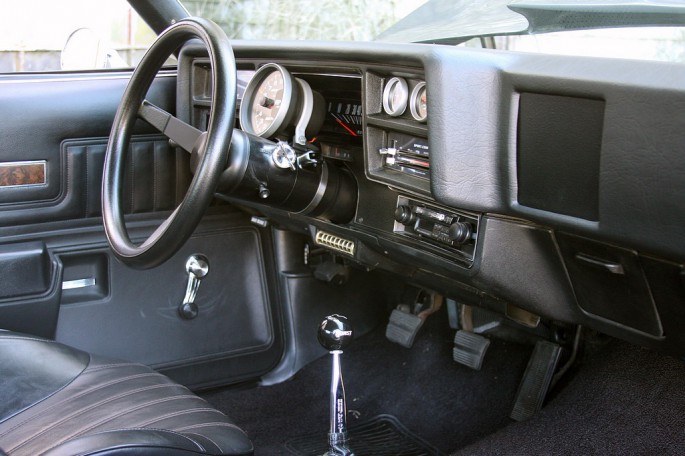 The interior of the car follows the same design ethos as the exterior. Functionality is king and there are some killer subtle touches working well with factory equipment. The steering wheel, which we love is a $40.00 Grant piece. The tach is clamped to the column and the factory dash still looks great. 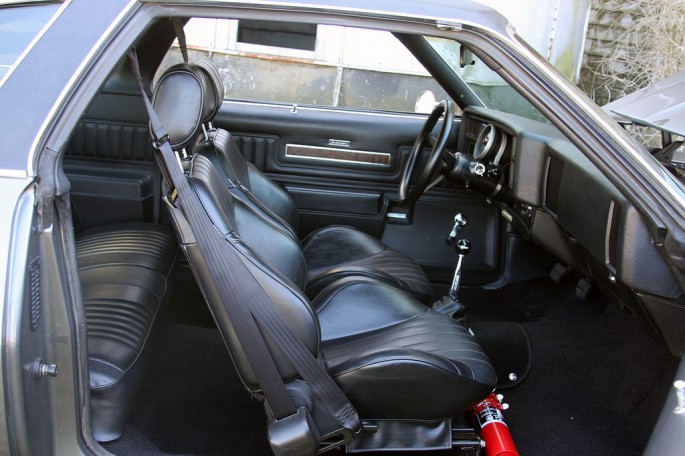 The seats are Procar Rally models and they are comfortable and cool. Part of bending corners is being planted in the car and these well bolstered seats do that well. 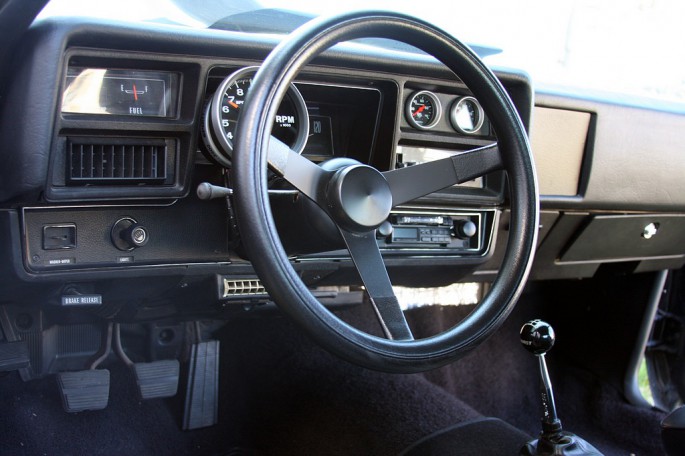 That steering wheel rules the school and totally fits the aggressive nature of the car as well as the interior scheme. 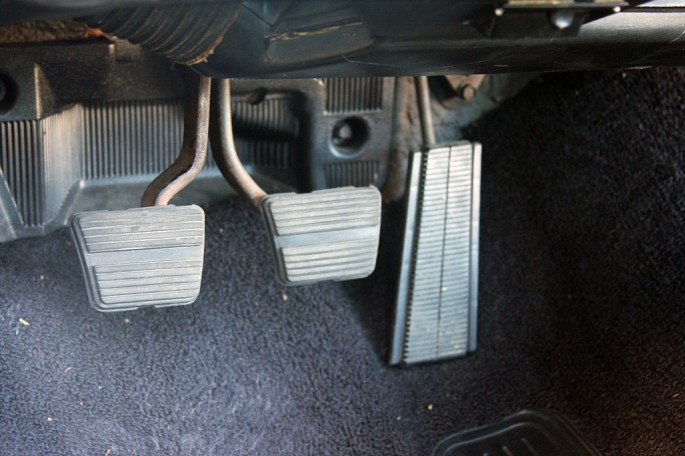 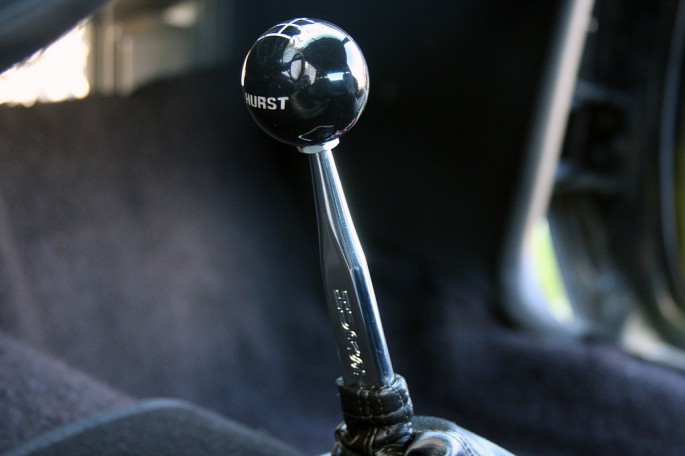 This car has a T-56 six speed transmission in it. Back in high school, Sean had swapped a Super T-10 four speed into the car and banged gears on that for a long time. He upgraded to the T-56 recently and it was an all winter long project because of all the work needed to get the thing to fit, to get the linkage and adjustments right, and just to get the install done. The T-56 is certainly larger than a Super T-10. Sean and his friends wrenched, cut, welded, and bashed all winter to get the six cog transmission in and they did a fine job. It was cool riding with Sean while he snicked through the gears! 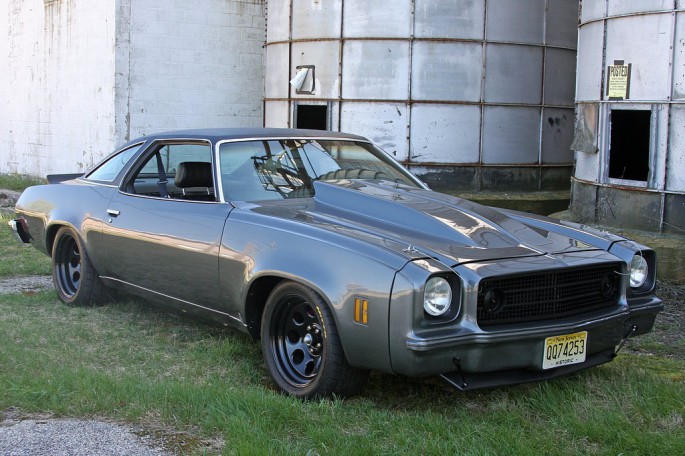 We can’t talk about a Pro Touring car without talking about suspension stuff. This car is all about performance on a budget and Sean did a killer job of matching parts to make the Chevelle both look the part and act the part! The springs are OPG 2″ lowering pieces, not expensive and sexy, but effective. There are KYB gas adjustable shocks on the corners, a Hellwig sway bar up front, stock sway bar in the rear, Hotchkis upper and lower control arms in the rear, Energy Suspension bushing up front as well as a host of Moog parts. Sean also used the Global West offset cross shafts in the front. 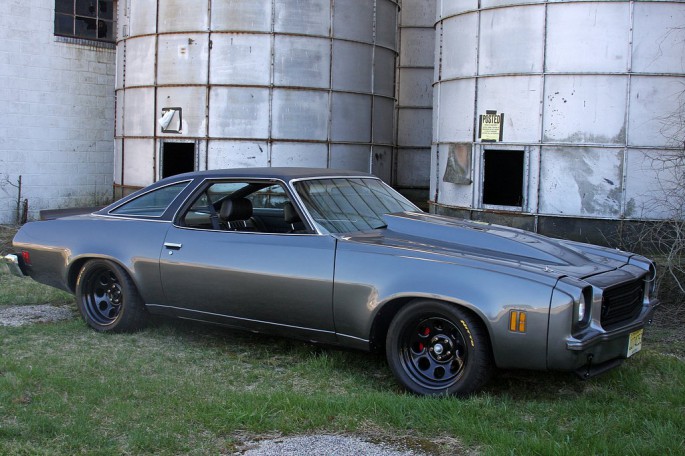 Sean really nailed the stance and the whole vibe of this car. 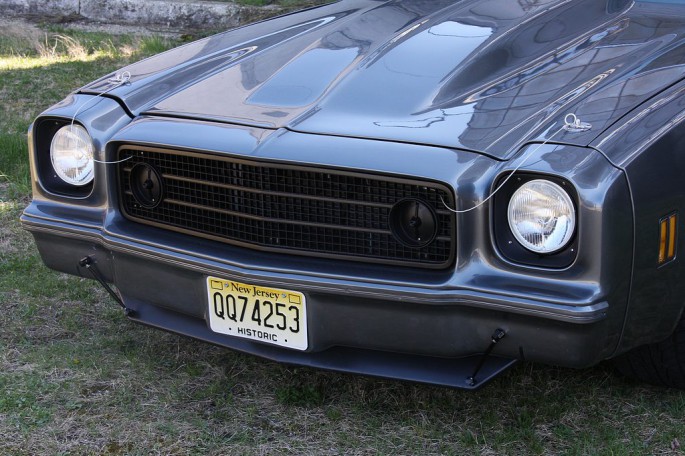 We loved this small spoiler on the nose of the Chevelle. Another cool and restrained touch. 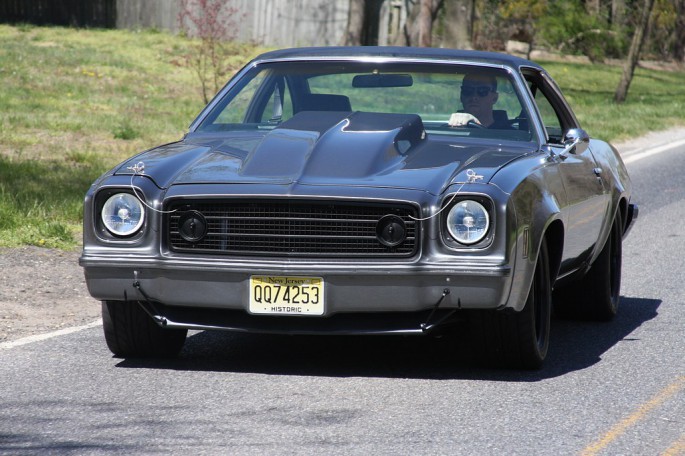 The Chevelle looks fantastic going down the road. 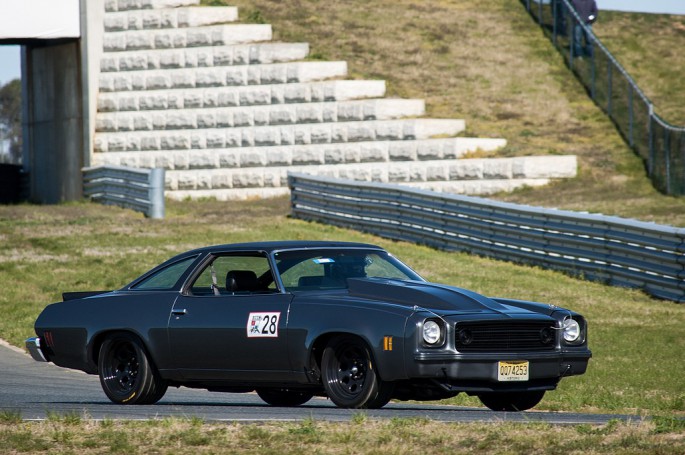 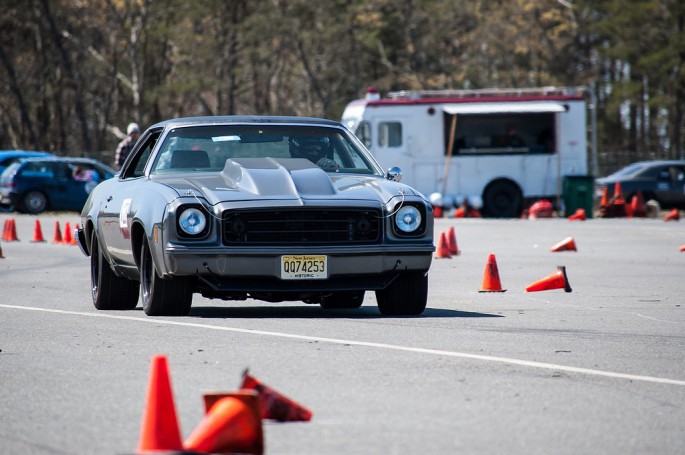 On the autocross as well! 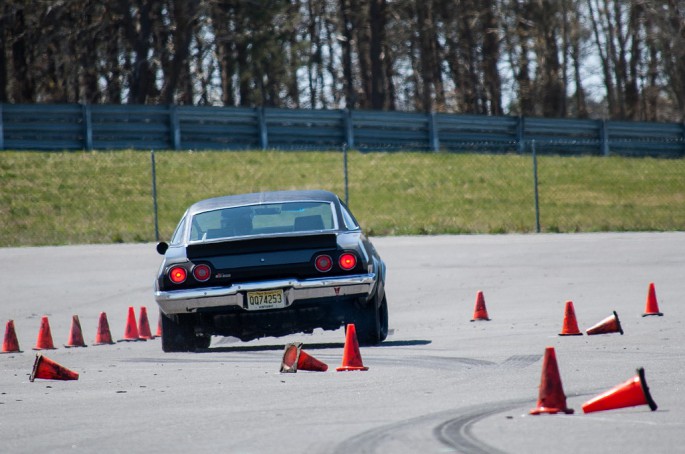 Oh, this Chevelle is large and lovely but it looks even better being driven hard! 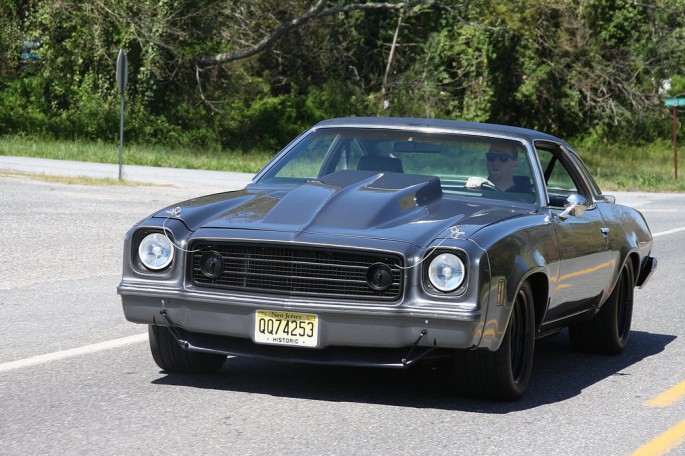 Sean had a bunch of people to thank for help on the car. There’s Gary Betsy’s Performance Restorations, Rob Ward for the excellent paint, his mom and dad, his pals, uncle Roger, Nick Weber, and most importantly his wife Sue and his son Jackson. Cars are all a community effort and Sean was heaping praise on everyone but himself over the Chevelle. He gets some credit, too! 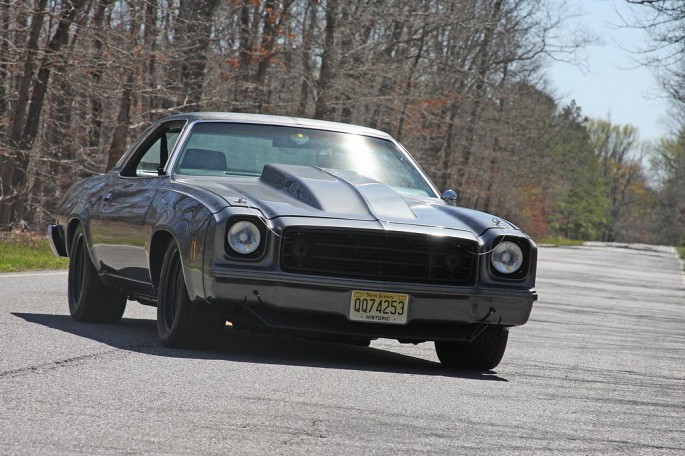 Sean Rich’s 1973 Chevelle is an example of what we believe Pro Touring to be about. This is a car that looks and functions at a far higher level than it could have dreamed of when stock. It has been built on the budget by a regular guy in his home garage. It combines frugality and critical thought to make a great high performance package. It is fast, it is loud, and it turns like a mother. What’s not to love?!