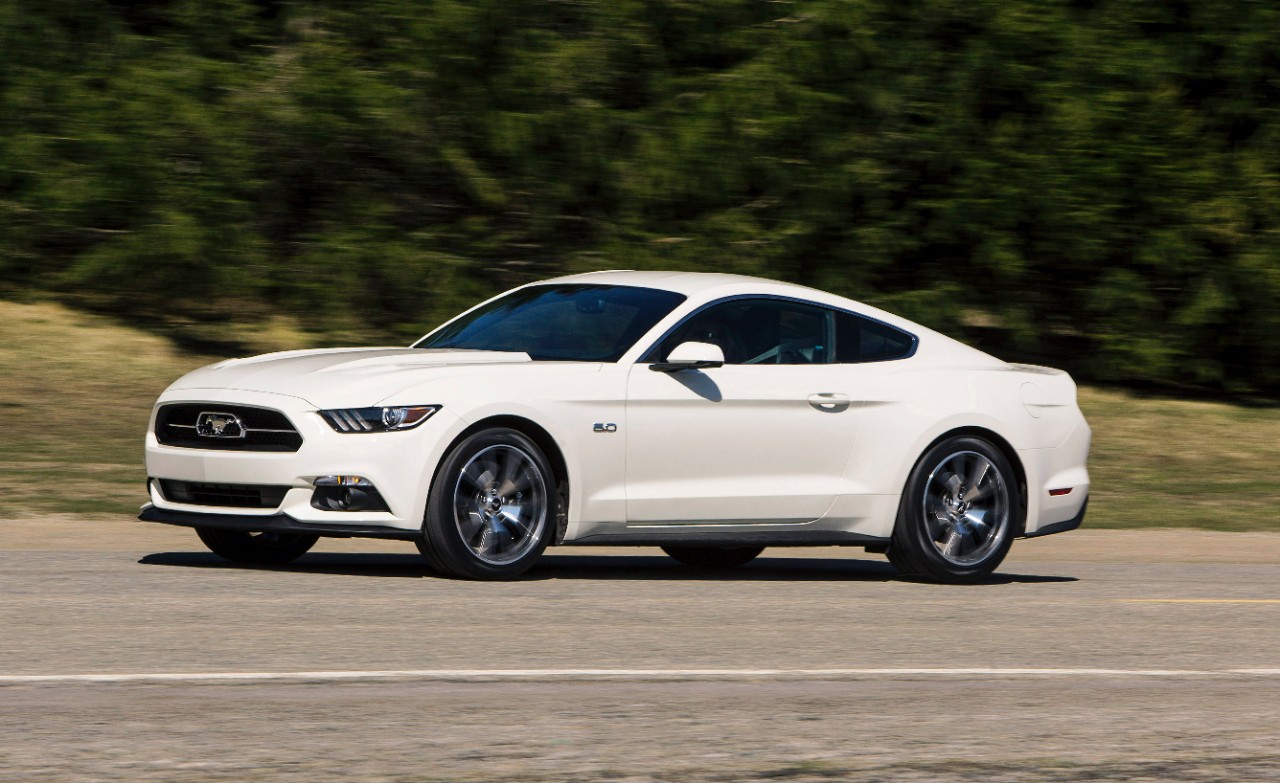 Today Ford announced the release of a 50th anniversary limited Mustang of which 1,964 will be produced to commemorate the half century birthday of Ford’s iconic pony car. The cars will come loaded up with every single option that is available on the Mustang and the only things that buyers will have to choose is whether they want an automatic transmission, manual transmission, and the exterior color. The cars themselves will be built late this summer and will be delivered to dealers in the Fall. We have no idea what the retail price of this car will be but we do know that they will probably be completely sold out long before they are produced and the ones that do pop up will be on eBay for twice what the (we’re guessing) steep retail number will be. That seems to be about the way these things tend to go.

The available colors are Wimbledon White and Kona Blue and other exterior styling changes are the addition of some chrome accents around the headlights, in the grille, the side glass, and surrounding the tail lights. Louvered rear quarter windows and a big fake gas cap in the center of the rear of the car round out the exterior styling changes. Power comes from the same 420hp Coyote motor that will power the 2015 Mustang GT so we know it will scoot pretty hard. Manual transmission cars get a 3.55 rear gear and manual transmission cars get a 3.73 ratio. On the inside, classed up materials like a cashmere sewn, leather wrapped steering wheel, custom dash panel etched with a serial number for the car, and other niceties abound.

What do you think? Is this a special car that Mustang fans will be fighting over? An easy financial score for Ford by (probably) jacking up the price for this “limited edition” car, or something really neat that will be coveted by collectors in 50 years.

SCROLL DOWN FOR PHOTOS AND THE FULL RELEASE FROM FORD! 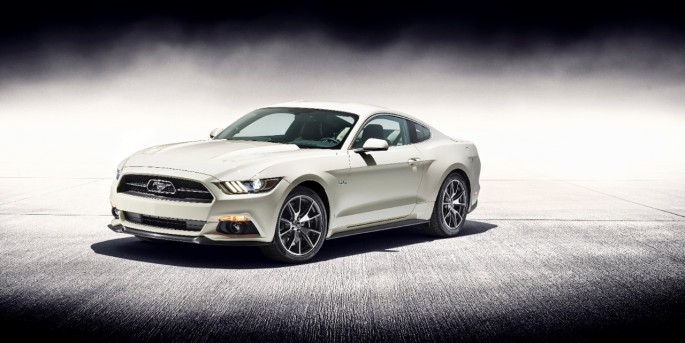 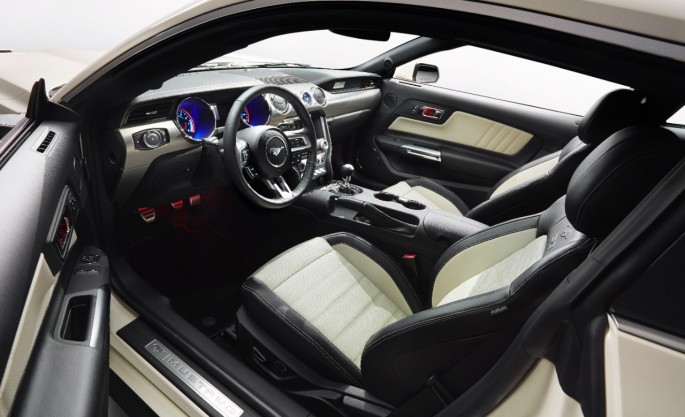 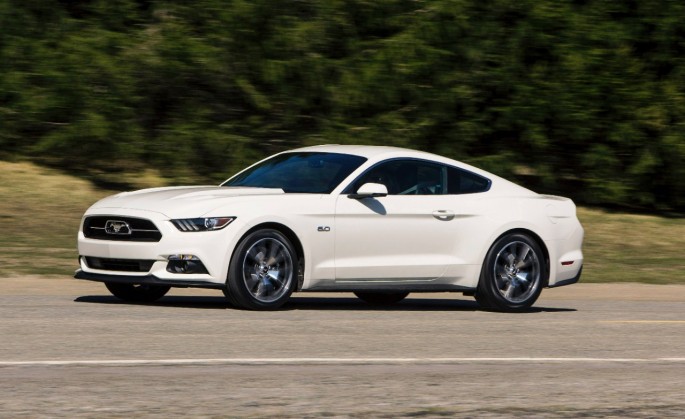 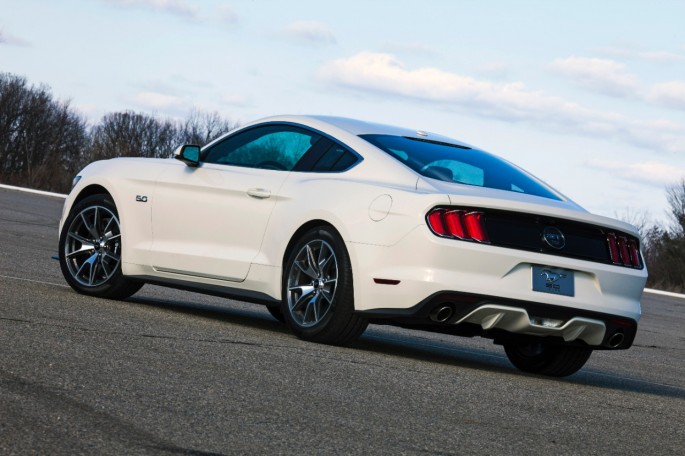 VISIT THE 50 YEARS OF MUSTANG COLLECTION

“When Mustang was approved for development more than 50 years ago, I don’t think anyone imagined it would spawn such a dedicated base of fans around the world and still be in production today,” said Bill Ford, executive chairman, Ford Motor Company. “We are thrilled to be here in New York – where Mustang was first shown to the public at the 1964 World’s Fair – to re-create that historic event for today’s Mustang enthusiasts.”

Based on the all-new 2015 Mustang GT fastback with performance pack, the 50 Year Limited Edition is designed to provide customers with outstanding performance and a unique appearance that will be instantly recognizable on the road. The only options for the 50 Year Limited Edition are the choice of two exclusive colors and a six-speed manual or automatic transmission.

50 years of inspiration
“The new Mustang blends a muscular, contemporary shape with design cues that define it as quintessentially Mustang,” said Moray Callum, Ford vice president of design. “The 50 Year Limited Edition adds details that set it apart from other Mustangs, while hearkening back to the 1965 original.”

The only two available colors are Wimbledon White, like Mustang serial No. 0001 that was first sold to Capt. Stanley Tucker in April 1964, or Kona Blue. Both are exclusive to this limited-edition car.

“Chrome trim was much more prevalent on cars in the 1960s than it is today, so we added some discreet highlights for the grille, side glass and tri-bar taillamps,” said Callum. “The darker Kona Blue provides a particularly striking contrast against the chrome.”

Chrome bezels surrounding the base of each of the three taillamp blades take inspiration from the original1962 design proposal by Gale Halderman that became the basis for the production model that debuted in 1964. The three individual lamps on each side of that design were combined into a single tri-bar lamp cluster for production, but the original concept has returned five decades on. The Mustang 50 Year Limited Edition will be the only 2015 model with the large faux gas cap badge on the rear fascia, with 50 Years added to the GT designation.

Another visual element that won’t be found on any other Mustang is the louvered rear quarter-windows. Unlike the external louvers on the quarter-windows of the 1965 fastback, the new windows are comprised of layered sheets of glass built with a construction technique uniquely developed for this car.

Unique cockpit experience
From behind the wheel, drivers will know they are driving a very special car. The aluminum trim panel that spans the double-brow instrument panel gets an axel spin finish different from other 2015 Mustangs, plus a special serialized 50 Year Limited Edition badge on the passenger side. Each badge will be individually etched at Flat Rock Assembly Plant where Mustang is built.

The limited-edition is the only 2015 Mustang with a cashmere-stitched, leather-wrapped steering wheel. The stitching is also used on the instrument panel, shifter boot, center armrest, door inserts and seats. The seats feature exclusive two-tone cashmere and black leather upholstery, and the Mustang 50 Year logo on the seat backs.

Limited-edition cars will be equipped with loop-carpet floor mats with cashmere stitching and suede binding not available on other Mustangs.

A showpiece meant to be driven
“Mustang fans love to drive their cars, even the rarer examples of the breed, so we built this limited-edition from the best-performing 2015 Mustang available – the GT fastback with the performance pack,” said Dave Pericak, Mustang chief engineer. “While some collectors will undoubtedly stash this car away in a museum, those who choose to hit the open road will get a world-class sports car that can run with the best.”

The 50 Year Limited Edition is the only 2015 Mustang that will be available with a combination of an automatic transmission and the performance pack. When equipped with the six-speed automatic transmission, the Mustang 50 Year Limited Edition will get a limited-slip rear differential with a 3.55:1 final-drive. Customers who opt for the six-speed manual will get a Torsen differential with a 3.73:1 final-drive ratio.

“We wanted to provide our most dedicated fans with the emotion of the original Mustang in a 21st century car,” said Ford. “With this 50 Year Limited Edition, I believe we have accomplished our goal.”

Test Your Gearhead Knowledge: Tell Us What Engine This Weird Crankshaft Is From! Watch A Racer Lose The Handle On A Porsche During A Standing Mile Event At 170 MPH