High School Confidential: The Hilarious Story Of The Psuedosport Monte Carlo – Near Death Experiences And More 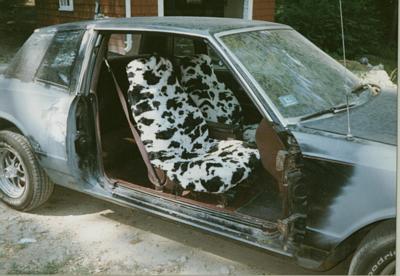 Back in High School, my friend Greg bought a 1986 Chevrolet Monte Carlo “Sport Coupe” from a relative. While I and other friends were messing with go-karts and mini-bikes, he jumped right from bicycles to cars. The car was in rough shape, but it had a LG4 305, buckets, and a console. A few trips to the junkyard later, he had himself a Monte Carlo SS nose and some other SS goodies. He renamed the car the Pseudosport.

A lot of our friends were gearheads. I had my ’64 Skylark and ’87 Cougar XR7’s, another friend Pat who lived in Greg’s neighborhood had his late 80’s Honda Accord LXi hatch and later a Wrangler, and other friends always were wrenching with us or on their own cars. Usually, the three of us would meet up after school most days of the week to wrench on something or go to the junkyard to get something for the Pseudosport or just to look around and dream of restoring something sitting in the yard. 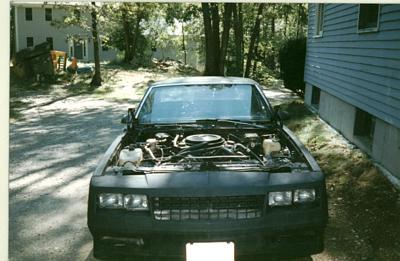 The car was always in a state of flux. Sometimes, I would go over to Greg’s place and the car would have no interior. Sometimes, it would be stripped to bare metal, while other times it would be wearing flat black primer (aka Stealth Mode). And other times, things like the exhaust or doors or even parts of the floor would be missing. That didn’t stop Greg or any of the rest of us from driving it any chance it would start. People, and sometimes the police, would look at the car and think it was stolen or a cruel joke. Greg didn’t care, and neither did we. The car’s classic configuration was as follows:

-Tinted windows, including the crucial late 90’s “Calvin peeing on the Ford logo” sticker right in the middle of the rear window

Over one winter in our senior year, Greg gave the Pseudosport a little break to tackle its various ailments and he drove his dad’s ’85 C10, His uncle’s S15 Jimmy or his grandmother’s late 80’s Caprice Wagon to school and work. One Friday in February we started talking about the car in study hall, and we decided to spend a few hours after school slapping bits and pieces of it back together in order to take it for its yearly inspection. Here in MA, if you don’t pass, you get a sticker with a big R on it for Rejected. Some call that the “Type-R Edition” inspection sticker. We figured to bring it to a local inspection station and they would essentially reject it and list all the things he needed to fix for it to be road worthy. We putted down to local inspection station and they pulled it into the bay as we waited outside. 5 minutes later, which was a little too quick, they pulled it back out. Instead of the expected “Type-R”, there was a big 2 on there. IT PASSED.

Well, if it passes inspection, it must be safe to drive, right?

We booked it back home and called our buddy Pat to see if he wanted to hang out, not telling him of the return of the Pseudosport. Greg tossed me the keys while he cleaned up the yard from

the after school wrenching session, and off I went. Pat heard the car from up the street and was already outside laughing. He saw the inspection sticker and snickered even more. I then tossed him the keys, just to mess with Greg when we pulled back into his yard. We fired it up and off we went. We should have known better than to trust that inspection sticker….

On the way back to Greg’s, we were taking a sharp corner and the steering column fell out onto Pat’s lap!!! Panicking, I grabbed it quickly and held it back up, and that nearly made us hit a family in a minivan. We forgot to bolt it in… D’oh! We make it back to Greg’s and shoved the bolts back in there and checked a few other things. Meanwhile, two other buddies called and asked what we were up to, and offered to meet us back at Pat’s place. We decided that the worst was behind us, and we would take the Pseudosport for our Friday night cruise.

Giving Greg back the keys, we piled in and headed back to Pat’s. While there waiting for our other two friends, we decided that since Greg had converted the car to a conventional non-computer controlled HEI and carb setup, the car’s computer was no longer needed. We ripped it out, hit it with hammers, and I believe we set it on fire as well. This will be important later on. Our friends showed up, and we set out to hit up an ATM and go out to eat.

Travelling down the road, we were all feeling pretty good. Well, we were up until Greg thought the steering felt loose. That’s because the steering wheel came off in his hands! The nut was missing and it slipped off the splines on the steering column. The look on his face was priceless. He plopped it back on, and we made it to the ATM. We all got out and debated whether this trip should continue in the Pseudosport or if we should go back for one of our other cars. I was probably the most concerned, and was ready to bail. One of my friends convinces me that it will be fine, and that we should take the highway. Yeah, great idea.

We merge onto the highway, and everything seems surprisingly fine. The car is behaving properly and running nice. At that moment of peace, the CD in the Pioneer ends, and it was time for a new one. I’m riding shotgun, so I ask my friend in the back to reach behind him and grab the CD case on the package tray. As I see him reach back, he freezes. I then hear a faint wisp of extra 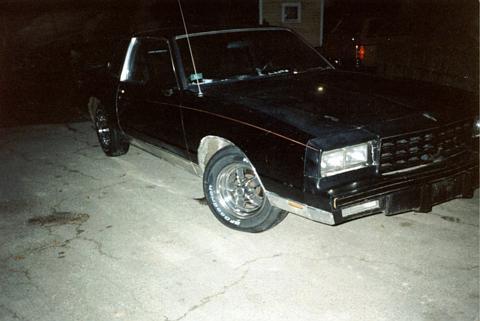 wind noise from the rear of the car. Still frozen mid-reach for the CD case, I see the rear window standing straight up in the wind! A few weeks before, Greg had removed the window to tint it and apply that badass Calvin urinating on the Ford Oval that all the cool Chevy guys had. When he reinstalled it, he had used some glue from a parts store and apparently it didn’t stick too well. Before anyone could say anything, the rear window jettisoned from the car, Calvin pissing on the Ford sticker and all, tumbling through the cold February night, straight at the nose of a mid-90’s Ford Explorer, no less! The Explorer had to swerve into the next lane to avoid it.

Greg, in full panic mode, floors it and goes for the nearest freeway exit.

As we get off the highway, we are all panicking about the window. Did it hit the Explorer? Were we going to get in trouble? We were scared kids, so we just took off. We coast off the highway to an intersection with a red light, and something new is wrong: the car does not want to slow down! You see, in our glorious destruction of the car’s ECU just hours before, we forgot that the car was equipped with a mid-80’s TH200-4R, which has an electronic lockup converter. From what I understand, without that computer completing the circuit, it would stall. So, in a panic, Greg shuts the car down and stands on the brakes, which luckily stopped the car. After that, we get it going and coast to a nearby convenience store parking lot, unceremoniously bottoming out on the way in to the point where we all had to get out to un-beach the thing.

There, we argued with each other. We were scared. We couldn’t think straight. But one of two things were happening: either we were going to soldier on and get some damn dinner, or we were going to tuck tail and go home. We were so close! So Greg says to give him a minute and he disappears under the Monte. Within a few minutes, he somehow connected something and fixed the lockup issue with the transmission! A small victory! At that moment we decided to brave the rest of the ride to the restaurant, where we could collect our thoughts and reflect on all the insanity that just happened.

After eating, we all felt a lot better. Our brains had time to process all that had happened. We accepted what had just transpired, and we had a lot of fun on the way home taking turns hanging out the rear window and generally being teenage idiots in a car that had become one with the group, and synonymous with all that we stood for. It was a work in progress, it was a mess, and it 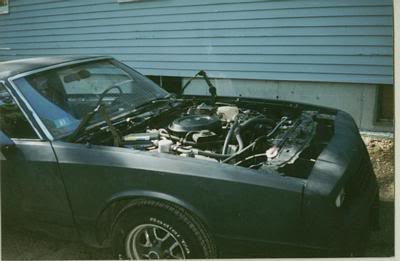 I learned a few lessons that night. One was that you should do your own safety inspections on your project cars. Like I said earlier, the Monte passed a state inspection. State inspections don’t check the tightness of your steering wheel or the glue on your exterior glass.  They aren’t going to know all the little things you change on your project, but you as the owner or builder do. Another thing is that cars are sometimes a resilient assembly of parts that can bring people together. That odyssey we took that night just to go grab dinner still sticks out in all of our minds as the moment that we earned the right to be true gearheads. We saw through adversity that an old, built-in-a-backyard car can challenge your patience and sanity, but ultimately be very rewarding. We had earned our stripes, and we never looked back. 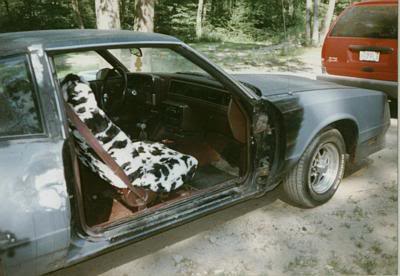 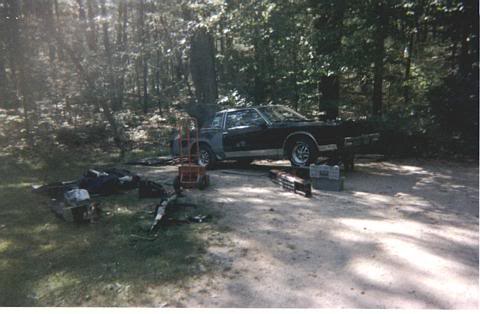 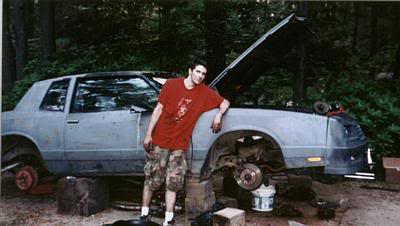 2 thoughts on “High School Confidential: The Hilarious Story Of The Psuedosport Monte Carlo – Near Death Experiences And More”