This Japanese Motorcycle Cop Has Skills! Watch Him Work The Cones In The Soaking Wet! 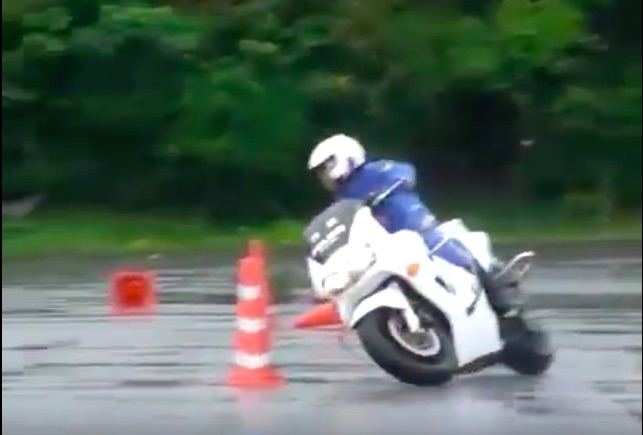 For all of my off-road riding days, I’ve only ridden a handful of street bikes: a Yamaha XJ1100 Maxim that had a bad gearbox, a Kawasaki that a roommate picked up on the cheap, a Suzuki GS250 to get my rider training certificate (so the Army would get off of my case) and my brother’s Vulcan. That last bike is the one I used on my rider’s test, and it made me wish I had the Suzuki instead. Leaning that big thing over in a DMV parking lot in Illinois in early summer was not my idea of fun. It got me the license, sure, but it was like wrestling with a tranquilized panda…sooner or later I was going to hurt dearly, but in the meantime I had a lot of weight to shove around.

Now, I can’t tell what kind of motorcycle the Japanese police officer here is riding (I believe it’s a Honda VFR800 or similar) but what this individual can do with the machine is highly impressive on a dry surface, let alone a soaking wet course with rain falling. Japanese motorcycle cops have what are called “Safety Riding Competitions” that allow bike cops to test out their skills over the course of several days. In addition to conework, the officers train on trail riding and motocross (!) as well. Does that mean that proficiency training also counts as a state-sponsored track week?

We Never Expected To See A 1990s Ford Thunderbird Drifting, But This Rules! Classic YouTube: The Callaway C6 SuperNatural Corvette LM - Swinging For The Fences In 1994!