Listen To This 408ci LSx Powered Porsche Carrera 4 Fire Off For The First Time – We Need One Of These! 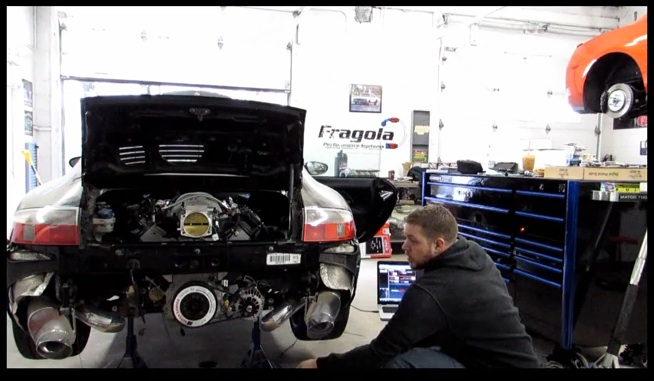 Sticking Chevy engines into the back of Porsche coupes isn’t exactly a new trend. Guys have been jamming mouse motors (and even big blocks) into the German wunderkinds for decades but today’s swaps have taken on a far cleaner, higher tech, and balanced look and feel. Take this car for example. Porsche has been cranking out AWD models of the 911 since the late 1980s and if you have the cash you can option them up 400hp out of the box. That’s pretty stout and would be a for sure entertaining car to blast though mountain roads or dig in with at the strip. If you want to modify the thing to make more power there are a bunch of companies out there capable of stepping your Porsche up big time but now you are talking gigundo money. What’s the other option? Slamming a worked LS engine in the back, baby! Brandon Furches did all of the fabrication and fitment work to make this package fit like it was there from the factory at his Springfield, Massachusetts shop, Furches Performance. What you’ll see in the video below is him firing up the engine for the first time after getting all tucked in and hooked up.

What is said engine? How about a 408ci LSx stroker that uses a F.A.S.T 102 LSxR intake manifold, Holley EFI, worked 243 casting heads with COMP springs, and an exhaust system built by another western Massachusetts outfit, Cotton’s Performance. The thing sounds shag nasty and we’re not even getting to hear it with a load on going down the road. We’re going to keep you posted on this build and maybe ol’ Nutting and I will skip out there to Furches place to see what this thing is all about. Being that he made the motorplate, the water blocks, and all of the other associated pieces to actually make this package fit and work like it was put there in Germany, it is a killer piece of work. The Porsche 6-speed transaxle is in place, all of the gauges work like they should and the cooling system is largely stock except for the addition of a Meziere remote pump to keep the sauce flowing.

We’re not going to go down the hackneyed, “This ought to make the Porsches fans mad….” route. Instead we’re just going to give a major thumbs up to a guy doing some awesome custom work and making a name for himself with quality builds like this one. Everyone needs one of these in their life.

Get An Early Start On Your Christmas 2015 Shopping Now: This Remote Control 1:4 Scale Liebherr Bucket Loader Would Look Great Parked Next To The Tree! Is This 2JZ-swapped Aston Martin DB7 A Great Idea Or An Evil Chimera? You Decide!

6 thoughts on “Listen To This 408ci LSx Powered Porsche Carrera 4 Fire Off For The First Time – We Need One Of These!”