Apex Video: Matt Farah Benchmarks His Foxbody On A Roadcourse 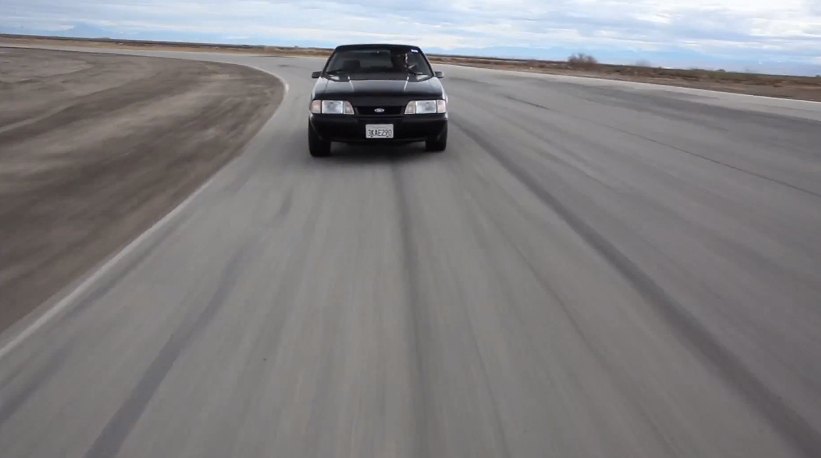 As someone that loves The General’s products as much as I do, I have a confession to make: I’ve always secretly lusted over Foxbody Mustangs. Yes, it’s true: From the early “four-eyed” cars to the last ‘93 Mustang to roll off the assembly line, I’ve got a soft spot for them all.

If you really think about the revival of the performance vehicle aftermarket in the 80’s, the Mustang can be credited with helping to kickstart it, if only because the move to EFI in the early 80s forced people to expand their thinking beyond rejetting a carburetor. Sure, there were some growing pains in the form of a blown up motor or two along the way, but fast forward to 2014 and we now have 600+ horsepower vehicles with factory warranties and relatively mild street manners to boot. That’s a big leap from a factory 426 Hemi car of yore.

However, while the Foxbody is famous for its straight-line performance, one thing that it’s not as well-known for is taking corners, or to be more precise, exiting a corner facing the same direction that it entered said corner. Not that the Foxbody couldn’t be turned into a capable autocrosser and road racer, but the vast majority of their owners seem content with adding some form of forced induction and going Camaro hunting at the local drag strip.

The thing is, with Pro Touring in full swing and a bountiful aftermarket, there’s no good reason why you can’t create a killer track car out of a third-generation Mustang. Sure, the four-link rear suspension and solid rear axle isn’t the best design out there, but my G-body has the same basic design and there’s plenty of solutions out there to allow the rear to articulate as needed. Outside of bolting up the now-ubiquitous adjustable aftermarket control arms with spherical joints, if you really want to get fancy you can always look into a Watts link to control your roll center. Same goes for the front suspension and brakes: If you have the money and/or the ingenuity, the factory shortcomings in all areas of the chassis can be overcome relatively easily.

This is where Matt Farah from The Smoking Tire comes in. To my extreme jealousy, he picked up an ex-CHP car a month back and is filming updates as he baselines the car at the track and from there builds the pony car into a canyon-carving monster. Stating that this car is close to mint is an understatement, as the majority of the drivetrain was recently rebuilt and looks restoration-fresh.

So far there’s two videos in the series, with the first being a walk-around of the car as-delivered, followed by the latest video which shows him tossing it around a few corners at Buttonwillow Raceway Park.

For me at least this is a “must watch” series as I really dig watching builds that benchmark performance along the way. Don’t get me wrong, I love seeing action videos of fully-prepped vehicles eating up tarmac, but in my opinion that end performance is much more meaningful if you have a notion of how far the car has progressed from its factory roots. It’s also inspiring for me as well as I’m hoping to follow a similar path with my ‘87 Monte Carlo LS over the next year or so.

Anyway, without further ado below are Part One and Part Two of the video series. Love it? Hate it? Let us know in the comments!

CLICK BELOW TO WATCH PART ONE OF THE SERIES

CLICK BELOW TO WATCH PART TWO OF THE SERIES

9 thoughts on “Apex Video: Matt Farah Benchmarks His Foxbody On A Roadcourse”