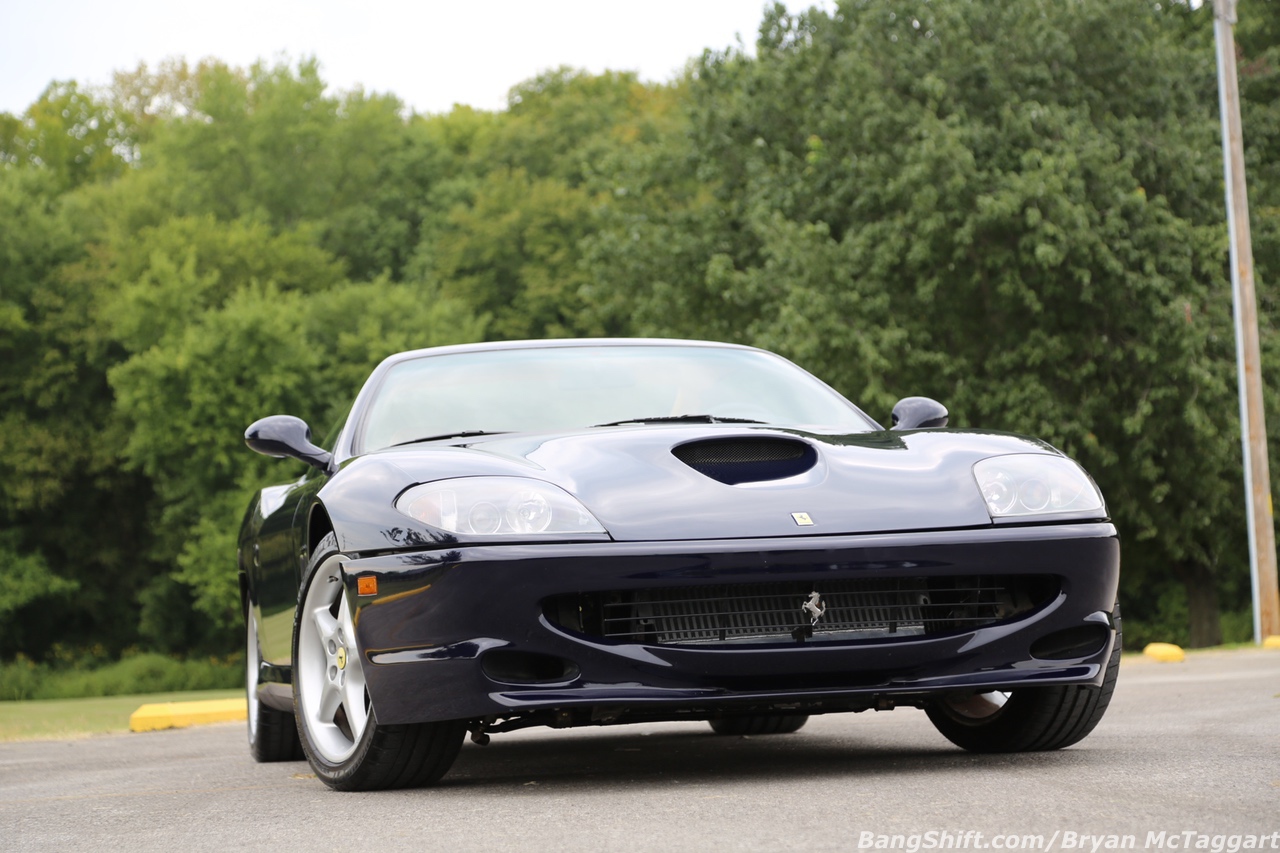 The drive from MCR Tuning’s headquarters in Horse Cave, Kentucky to the park we had chosen to shoot the car at is about thirteen miles. For thirteen miles, I was having one of the best shows I’ve ever seen, following Matt Rogers as he led me down the roadway. Every intersection, I looked inside the car waiting to turn for the reaction as Rogers passed by, and without fail, every neck pivoted as if the eyes were magnetically attracted to what they saw. As we passed Caverna High School, I watched as one of the football players absolutely lost his concentration as we rolled by, which ended up getting him slammed to the ground by someone who hadn’t noticed the show. Nearing the park, I had to race a Honda Civic up a hill to make sure I stayed behind the Ferrari 550 Maranello that was barking a tune nobody in Italy ever would expect to hear come out of the back end, and when we pulled in to shoot photos, people leaving the park would creep by slowly, checking out what the fuss was all about at the back end of the parking lot. 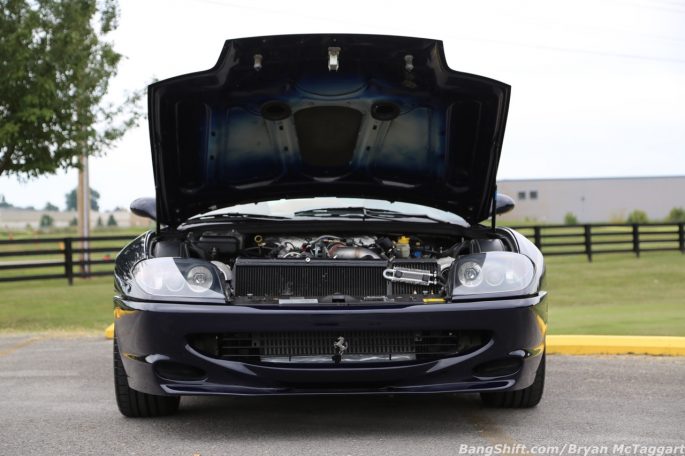 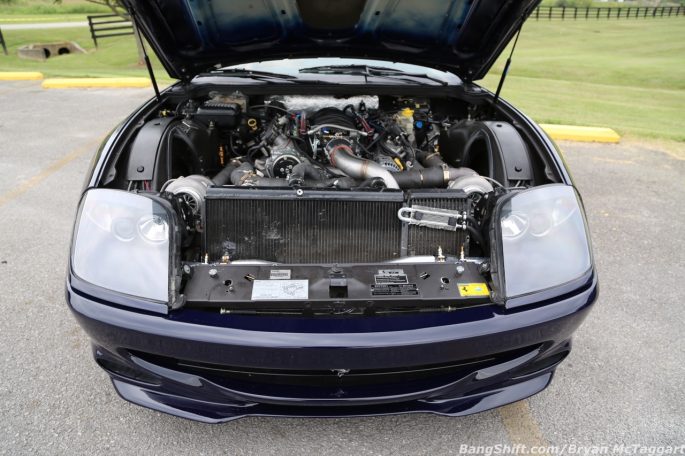 Where the Ferrari is now is a far, far cry from where it was in 2017. This car is one of the nearly half a million vehicles that were destroyed by Hurricane Harvey’s immense flooding in the Houston, Texas area. Truth be told, at one point this car had more in common with fish than it ever would with a prancing horse, but to let one of the 3,083 Maranellos go to the crusher seemed a shame. The shape alone is absolutely gorgeous, and the front-engine/rear-drive layout opened up options that otherwise would be considered sacrilege. It’s a rebuild, from tip to tail, and what a rebuild it’s been. Let’s start with the party piece that we first tipped you off to back in May: the V8 that took the place of the seized V12 that should be under the hood, an 5.5L de-stroked LSX mill with twin Garrett 35/82R turbochargers. The goal for the car is an even 1,000 horsepower at the wheels and an 8,500 RPM redline, but the Maranello hasn’t been on it’s feet long and there were still some tuning issues being ironed out at photography time. The engine feeds the factory Ferrari transmission via the factory torque tube, using a C6 Corvette bellhousing to make the adaptation. A Holley 45o liter-per-hour fuel pump from a fuel cell feeds a Bosch unit before the LSX gets a sip of the good stuff. A C6 Corvette clutch, Camaro slave cylinder and Camaro clutch master cylinder handle the footwork part of the gearbox, while the shifting duties are still left to that oh-so-beautiful Ferrari gated shifter. Some things, you just don’t screw with and that shifter is one of them. 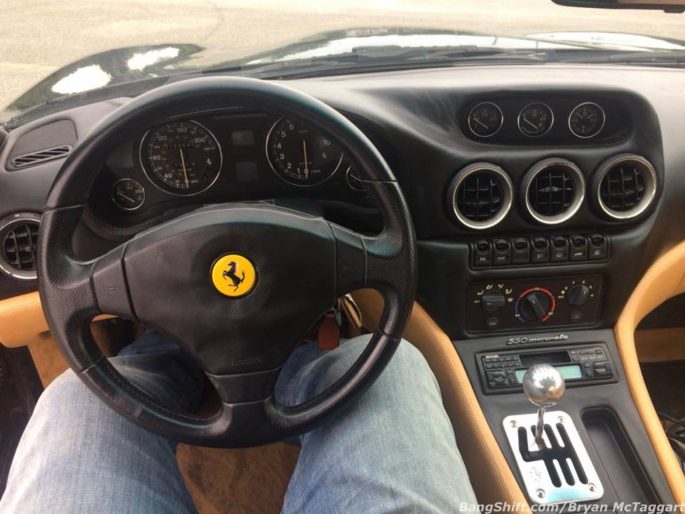 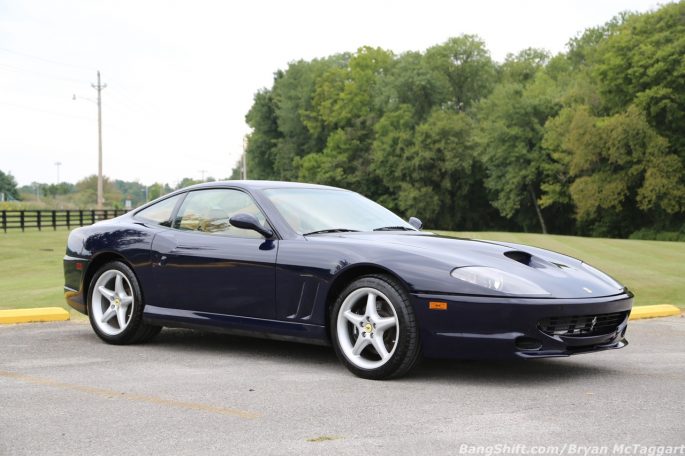 Outside of the LSX swap, though, the car is still more or less a Ferrari…”three-quarters of a Ferrari”, as Rogers points out. And he’s not wrong. Other than the much shinier radiator showing behind the grille and the exhaust note, there really isn’t much giving the car away. No LSX badging, no tubes or vents or bullhorns or any other crap taking away from the Italian feel of the car. The stock Ferrari brakes are still there, as are the wheels, drive axles, suspensions and the back half of the exhaust…though, to be fair, that will probably change soon, as Matt is still performing some tone adjustments to give the Ferrari the appropriate exhaust note. But even now, the sound will draw eyes and ears, and when the boost comes up and the car starts to move out, the car hits a song that, while not V12-like in any shape or fashion, is sonically different enough from every piped Camaro out there that it stands on it’s own. Parked and off, however, and the NART Blue machine is something else entirely…it’s almost demure. Nobody can call a Ferrari a sleeper, but MCR Tuning has done a great job of keeping most of what you would’ve seen in 1998 present and accounted for. It’d be too easy to jump into the deep end with “LSX Ferrari” and the potential over-the-top horrors you might envision, but as you see it…would you know before they fired it up? Not likely. 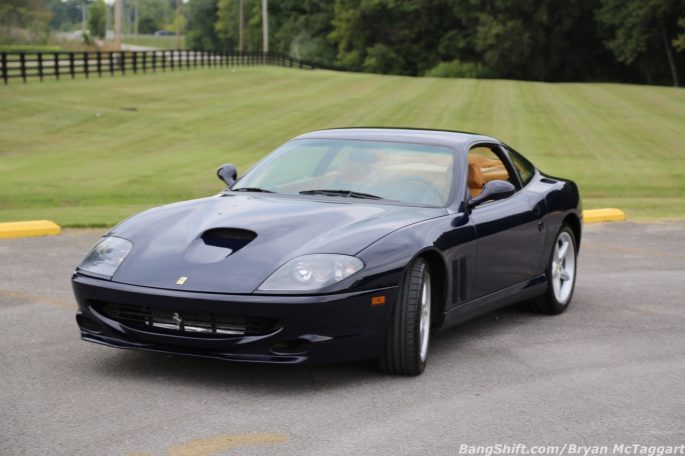 During an early preivew at the Nurburgring GP course, an editor of Road and Track had the opportunity to go for a ride with the legendary Niki Lauda. He wrote:

“Lauda doesn’t have a chance to explain much in two hurried minutes of clipped apexes and clipped sentences, but he does say: ‘You can forget the 512. No comparison. This is the first modern Ferrari, and the first I would really want to own.”

In 1996, when the Maranello debuted, I was thirteen and instantly smitten in a way no Ferrari before had caught my eye, and even though the 288 GTO has since gained the top choice spot on my personal bucket list due to it’s Group B rally connections, the 550 Maranello still sits as one of the most gorgeous shapes to have come out of the factory. Bypassing one of the major hurdles in 550 Maranello ownership, the horrifying costs of maintaining the 5.5L V12, makes the car just a bit more approachable. Though, there is heavy emphasis on “just a bit”…the initial cost of the swap alone will shock most. But for a car that should’ve become an crushed supercar after going for an unplanned swim, we’re just pleased to see that it’s alive, and ready to play harder than before. And so long as it’s haunting country roads of Kentucky, necks will continue to rotate and jaws will continue to drop as the LSX Ferrari cruises right on past. 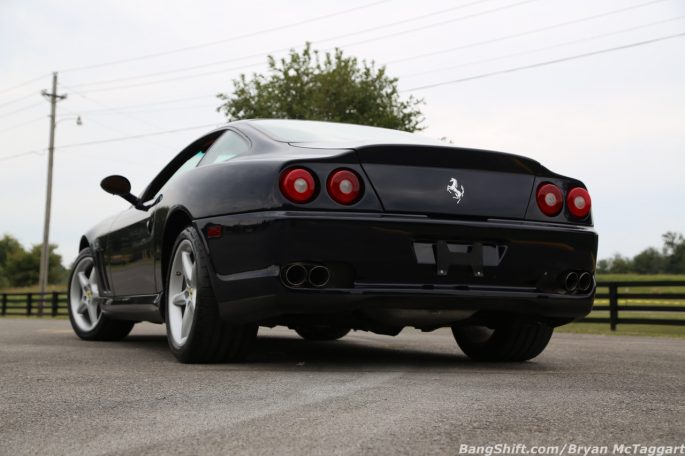 Best of 2018: Watch The Six Quickest Radial Tire Cars on Planet Earth Make Their Historic Rips Best of 2018: This Compilation Of Spectator Drags Wrecks From Beech Ridge Speedway In Maine Is Great