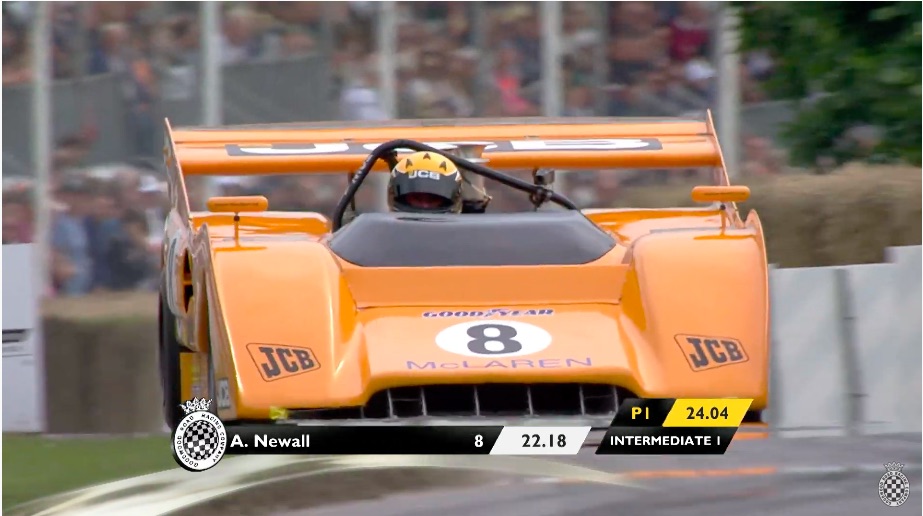 When we talk about the history and evolution of the legendary Can-Am series of road racing, what we have to really make as a line is the era before the Porsche 917 and then the era after the Posche 917 because that one car changed the whole deal. Before the 917 arrived on the scene, the McLaren M8 series of cars (which had debuted in 1968) were the dominating force in the series. They won championships for four years straight (1968-1972) and even they could not stop the beastly creation from Germany that arrived on the scene and just flattened everyone.

This car has an all-aluminum 488ci big block Chevy engine and the sound it makes in this video is verging on the pornographic. It’s just wicked and again, proving the nature of these cars, the driver takes the thing up the hill to set low time of the day by more than a second, displacing more modern and advanced cars on sheer balls and force of will. It’s racing, baby!

The neatest part of McLaren’s success is that a lot of it actually links back to drag racing. The lead engine builder for the company at that time was George Bolthoff, one of the best top gas competitors in the country. He got recruited by McLaren and went to Europe, working there building and developing their big block Chevy horsepower. How cool is that?!

Listen to this mechanically injected, all-aluminum big block powered roller skate just hammer up the hill. The astonishment in the voices of the announcers is also a favorite part. Awesome!