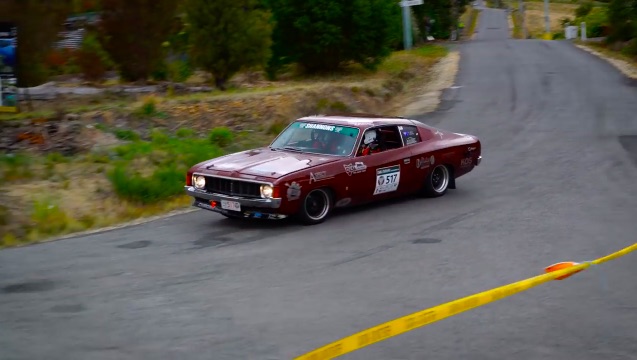 It’s been a strange week around BangShift Mid-West, with a strong focus on six-cylinder vehicles that didn’t come from the U.S.A. I’m not complaining at all about it, though…in fact, it’s been nice to expand my experiences and to drive what I’d never believe I’d ever wheel around. I’m appreciative of a good inline six, but to be honest, most of my involvement with them has absolutely jack-squat to do with performance. In my history, sixes are workhorses, be it the Ford 300, the Slant Six or the Chevy 250. Can they run? Yeah, but not like what I’ve got picked out for you here.

You probably know the Chrysler Valiant Charger E49, the 302 horsepower “Hemi 6-Pack” homologation hot rod from Chrysler Australia. This isn’t quite that car, and your first hint is the grille: the VH Charger sported rectangular headlights. The VJ Charger, pictured here, has two huge round bulbs up front, but overall it’s the same Valiant Charger two-door shape, and under the hood is a 265ci six with triple Weber carburetors that we are willing to bet is making much more than what the brochure claimed. Even if it is stock, though, it’s a runner, and listening to John Ravic wind this thing out as co-driver Tony Balazsi hangs on makes me pine for a chance behind the wheel of one of these beauties!

“What a surprise this was, when someone shared the article with me. Thanks BangShift.com for not only appreciating these Aussie dinosaurs, but also the backyard hobbyist/enthusiast as well!

… A little more background may be helpful so, for the record, this is not at all a ”race” car; it is a daily driver on full rego. The car is never put on a trailer, but driven to and from events, including Targa Tasmania, which, all in all was a 4000km trip with over 500km of competitive racing, in 38 stage’s on closed off sections of public roads, ranging from 6km up to just over 50km. Which of course is quite different to driving on a well known smooth race circuit with flag marshal\’s everywhere…

I have a 30year history with the car, which is a 1973, matching numbers E48 6 pack, one of only 160 ever made. The car still runs factory 1973 brakes with drums on the rear, has only basic steering/suspension mods, and very little engine mods: The Iron head has upgraded valves, rockers, springs and mild port work, and with only 9.7:1 comp. happily runs on very ordinary pump fuel. Factory crank, rods, etc… but with CP forged pistons, and a decent solid cam – 246/256 @ 50…

The engine and (original factory supplied) Weber carburetors were rebuilt by me, in a dirty backyard garage (I’m not a mechanic or engine builder, just an enthusiast, with some passion). Peak power is 330-340FWHP with 350FTPB. And makes everywhere between 260 and 280RWHP, depending on the day and the chassis dyno.

Targa Tasmania is an endurance event and at that time I was running 3.23 gears, so rarely took her over 5000-5500rpm, and 6000rpm only on the odd occasion. Remember that we were a very long way from home, and didn’t have a trailer. I have to say that there are times when you do have a moment during the event to realise that if things went bad, the best possible outcome would be a written off car.

The Charger has done28000kms in the last 18 months, (after a major rebuild, due to an under bonnet fire) and about 750km of that are “race” kms. She runs 3.45 gears now and has certainly proven herself quite reliable… I am considering running 3.7 gears for the next Targa Tasmania, which would no doubt wake her up a bit.

Here is a video of the car at Sydney Motor Sport Park, after Targa Tasmania, with 3.45 gears. It’s just a public track day, driven there, driven home, no changes made, and no support vehicle of any kind. Nor am I a talented, skilled, or very experienced a driver, just someone trying to have as much fun as they can with their pride and joy.

Classic YouTube: The Pilot Of This BO-105 Helicopter Has No Fear Whatsoever! How To Sell A 1965 Chevrolet Impala: Stick It On A Rock In The Middle Of The Surf!