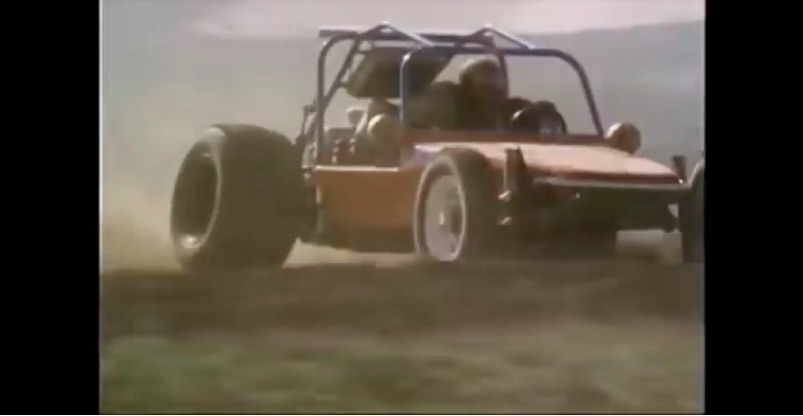 Sometimes stuff is so bad that it is good, right? Such is the case with this chase scene from the 1976 movie Flash and Firecat. The premise is simple. These people are both dune buggy enthusiasts and adveture seekers. They meet in their buggies, cause craziness, decide to rob a bank, and then the chase ensues. As this was made in 1976 the porcine police cars are awesome so see wallowing around on dirt roads and through the water, and the dune buggies are equally awesome. Being right for the period and wearing drag slicks on the back makes them even neater!

We actually love the sound of the dune buggy here and that may be the high point of the production. They nailed the stinger pipe scream of the little air cooled VW engine and it looks good ripping through the dirt, spinning donuts, getting sideways, and all of that stuff.

The actual chase action seems pretty good and the guys driving the dune buggy certainly had the best job on the set. They beat the daylights out of those things and had to have had the time of their lives.

We feel bad for the poor sap on the cop bike that tried to pursue them first. It did not work out so good for him.

This 1908 Film Shows How A 12-Inch BattleShip Gun Was Manufactured Nitro Bike Race Report: Vantine Nitrosports Off To A Slightly Destructive But Flying Start in 2019