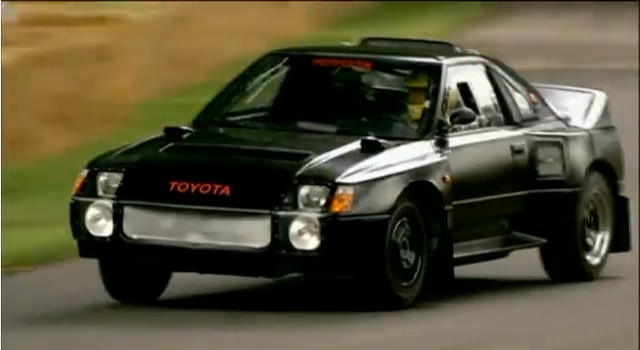 We give lots of love to Group B rally cars here because they were, at the time, the pinnacle of engineering insanity, and because of homologation requirements, a certain amount of street-going versions of the car had to be sold to the public. Sure, it was detuned from factory specs…maybe…but you still would get a rally rocket that had enough boost in the engine bay to launch the car like a fighter from the deck of an aircraft carrier. Toyota isn’t as remembered for playing in Group B like other manufacturers, but they did produce the Toyota Celica Twin-Cam Turbo, which was a rear-driver and did well at African rallies, but was big and nowhere near agile enough to deal with European rallies. There was, however, one other pet project that Toyota had been working on, but when Group B was killed off, so was the project, a mid-engined piece that had hints of MR2 about it, coded 222D.

Very little is known about the genesis, development, or of the car itself. Appearances have a hint of first-generation MR2, but the 222D is as related to the MR2 as the similar Lancia 037 is related to the Lancia Montecarlo: barely. Out of a rumored ten cars built, two are known to survive. Even the specifications are questionable: while the black car in the video is packing a 600bhp four-cylinder of questionable origin, others may have used a beefed-up variation of the Celica Twin-Cam Turbo’s 4T-GTE and there was even rumors of a V6 of some type finding it’s way underneath the 222D’s swing-up rear section. This video, from the Goodwood Festival of Speed, will give you an idea of just what Toyota could have done if circumstances would have been different. Judging from the tire setup, we think that the 222D is still a RMR layout, but the car is composed and moves nicely.

6 thoughts on “Random Car Review: The Toyota 222D, A Stillborn Group B Rally Response From Toyota”