Ride Along In A 427 Corvette Vintage Road Racing Car As It Swallows Camaros And Mustangs Alive! 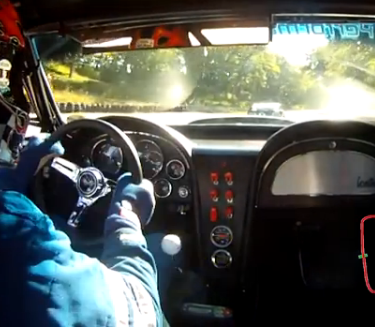 We have to thank Kevin Tully of Hot Rod Chassis and Cycle for the tip on this video. We were going back and forth with YouTube links the other day and he dropped this baby on us. We’re not saying that it is rare to see something we have not run yet, but you typically have to do a lot of digging to find one that hasn’t hit the front page of BS in the nearly 10,000 items we have published since 2008. This is fresh meat and a perfect video to watch on a Monday with your office door closed, speakers jacked up to 11, and your right hand ripping a fake shifter handle. Why? Because this big block Corvette is faster than all get out and it sounds like it should, which is sublimely awesome.

The car was built by the noted Illinois shop Performance Restorations and judging by how well the thing drives, how happy it sounds running up to redline and how handily it catches and swallows other cars on the track, those guys do great work. We’re not so sure of the exterior color of the Corvette (we think it is blue) but it could be painted up like a clown car for all we care. When you hear what the engine sounds like pushing the car down the front straight at 170mph, you’re not going to care either.

This footage was taken during qualifying so there are only a few cars on the track. If this were taken during an actual race there would be lots more traffic and lots of close wheel to wheel racing. Normally that makes things better, but the fact that the driver had a basically open track before him makes this one shine. He legs the car out, has to counter steer coming off of corners when he lays the power on, clips apexes, and seems to enjoy the sounds of the 427 at work as much as we do.

Small block race cars are “more balanced” and “make more sense” than big block race cars for road racing, that is kind of a fact. It is also kind of a fact that big blocks are cooler, sound better, make more power, and that “balance” and “sense” are two very overrated characteristics in the world of BangShifting. We salute driver Brent Jarvis for his great drive in this ten minute video around Road America. The guy has skills behind the wheel and the car to match them. It is a beautiful thing to watch, for sure.

11 thoughts on “Ride Along In A 427 Corvette Vintage Road Racing Car As It Swallows Camaros And Mustangs Alive!”