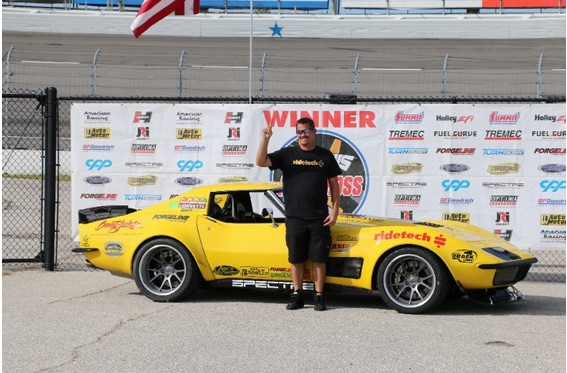 National championships in any form or motorsport are very tough to come by. They are never accidental either. These are feats accomplished by motivated and driven individuals who have not only great equipment but the dedication and drive to actually put in the effort to pursue greatness. This year, Chris “Smitty” Smith, driving the RideTech 48 Hour Corvette captured the Goodguys National Autocross Championship and did so in fine fashion finishing first or second at every Goodguys event he attended. That’s pretty nasty!

RideTech was one of the driving forces in the early days of the Goodguys autocross series and they have hung with the program through the years. The format at Goodguys events is cool because there’s a class for pros like Smith, a class for trucks, and a class for amateurs who are out there to have fun, go fast, and compete. Some of the best pro touring drivers and cars in the country regularly compete in the series so to take it home like this is huge for both Smith and RideTech.

The Skid Factory! Mighty Car Mods Is Branching Out Into Classic V8 Machinery With Two Of The Hardcore Wrenches They Work With! The Guys At Donut Media Put Together The Ten Best Car Chases From 1960s Movies - From Herbie To Bond, The Classics Are Here!