SEMA 2014: The Jet Hot Double Down Roadster Half Naked! The Car Runs, Drives, And Even Picked Up Some Style Points 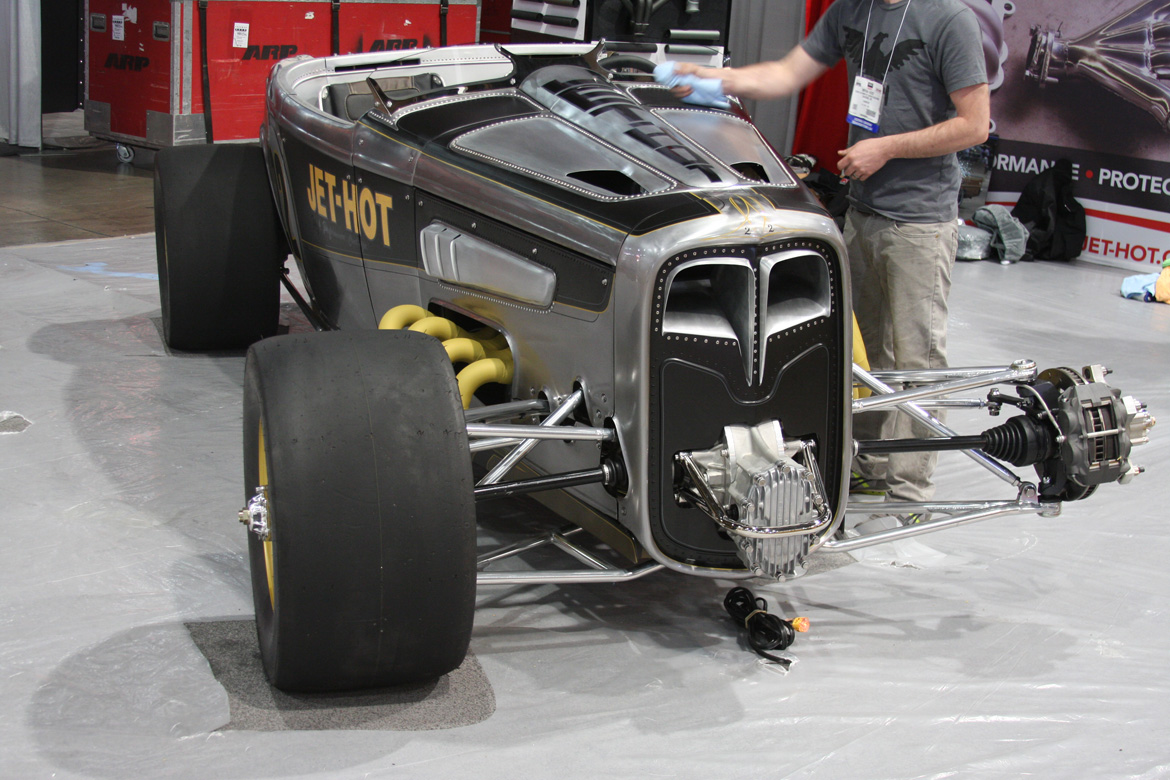 The Jet-Hot High Performance Coatings Double Down roadster has gotten a lot of electronic ink on our pages since last year at SEMA when the the car appeared at the show while it was under construction. Since a guy yelled at us yesterday for only writing about stuff that we think is really neat and BangShift approved, we’re going to recommend he stop right here because he’s not going to like what’s coming next. As good as seeing the car is in high quality photos from Bryan Fuller Hot Rods is, there’s nothing like actually seeing it in the flesh because every inch of the machine is enough to send a real gearhead into fits. From the quick change center section blasting through the front grill shell to the seemingly endless number of “rivets” in the body, to the yellow headers springing forth from the Kurt Urban built big inch Boss Ford big block, the NASCAR spec steamrollers on the corners, short, steeply raked windscreens, and sparing but cool paint, this car is unlike anything we have ever seen.

When we blasted these photos the car was being “prepared for its close up” in front of the throngs of people that attend the 2014 SEMA show. We dig the fact that Jet Hot decided to display it with half of the body panels removed, two of the tires removed, and the deck lid off. It gives you the opportunity to view the car from one side and see what it looks like whole and on the other side you get to see it and understand what makes it tick. Perhaps the best news is the fact that the car was driven on the street in Las Vegas and entered the show under its own power. While it won’t be running for the roses this weekend at the Optima Ultimate Street Car Invitational, it has the hearts and minds of every hot rodder worth his or her salt aflutter. Cheryl Herrick reported that the car wasn’t too bad to steer with all of that tire and that Fuller had dialed a minimal but noticeable amount of assist in the steering to help out at low speeds. Cheryl reported that the only thing that took some getting used to was trying to remember where the corners of the car were in tighter spaces. We’re sure that she’ll have the feel of this monster well in her grasp after some more time at the wheel. If not, we’d be glad to give ‘er a rip to see if we can be of any help.

The front suspension, which you will see in photos below is a mechanical work of art. It is fabricated everything. If we actually understood the science behind what you will see we would explain it. Our mission tomorrow is to corner Fuller and get the skinny on why he went with that design. Between the shiny pieces, machined pieces, and other parts that are beyond description, the front suspension is truly something to spend some time staring at.

We may request your help in starting a worldwide petition drive to influence Cheryl, Gordon, and the crew at Jet Hot to allow us to idle this car around a parking lot or something. Whaddya say, BangShifters?

SCROLL DOWN TO SEE OUR PHOTOS OF THE JET HOT DOUBLE DOWN ROADSTER – AWD AND BOSS FORD POWER! 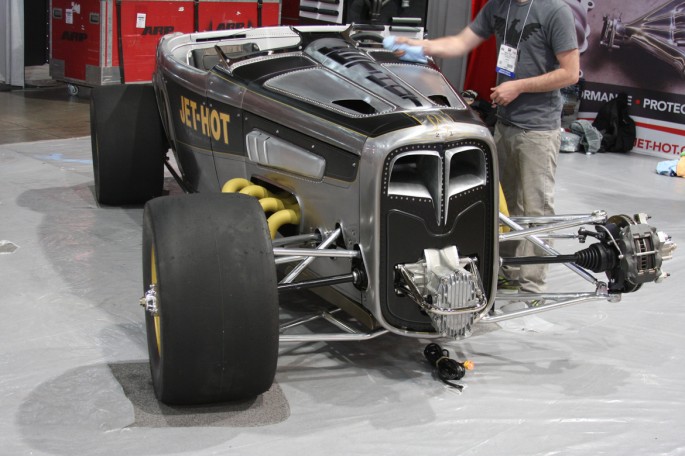 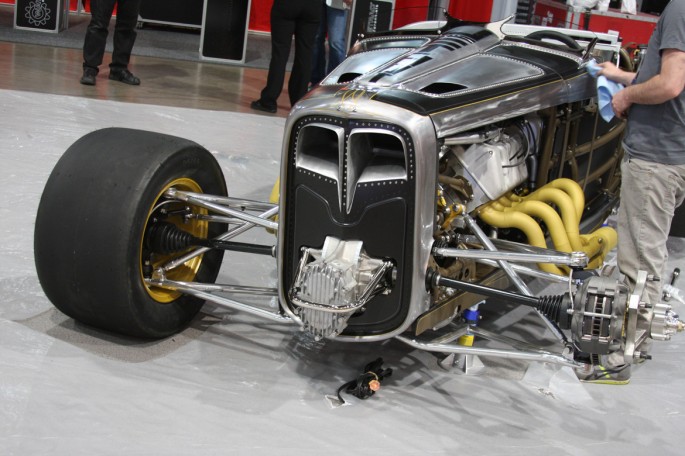 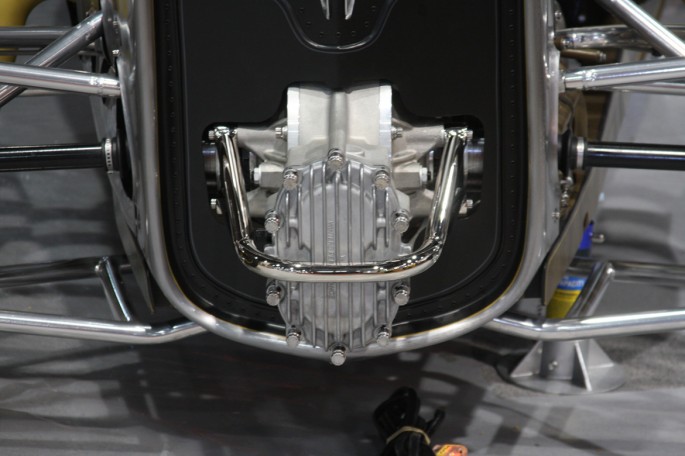 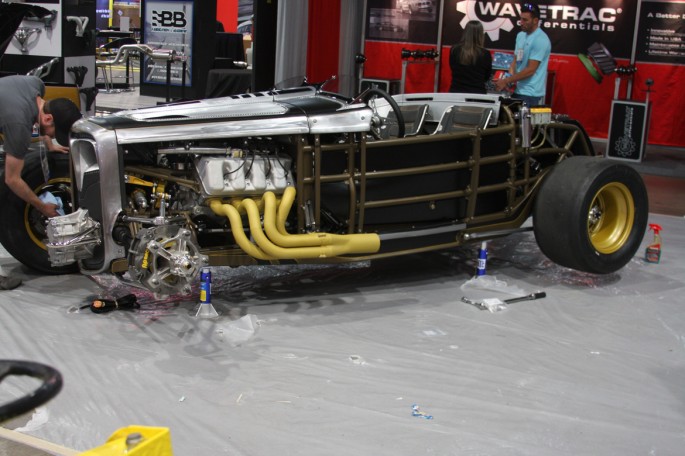 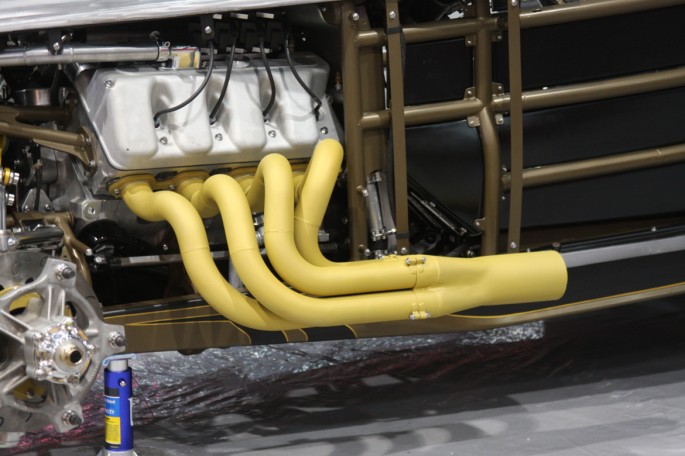 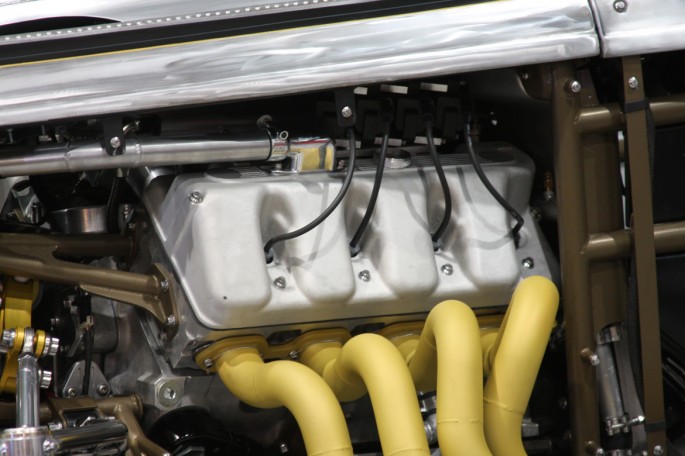 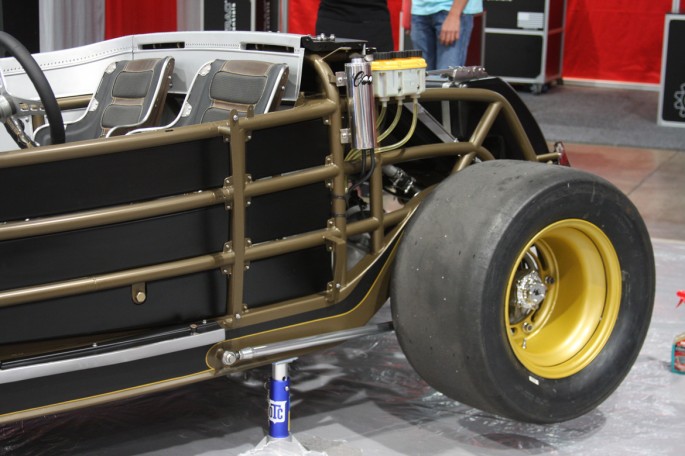 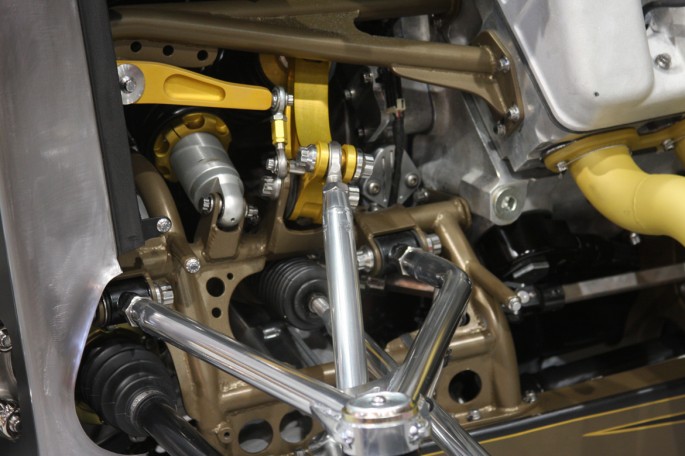 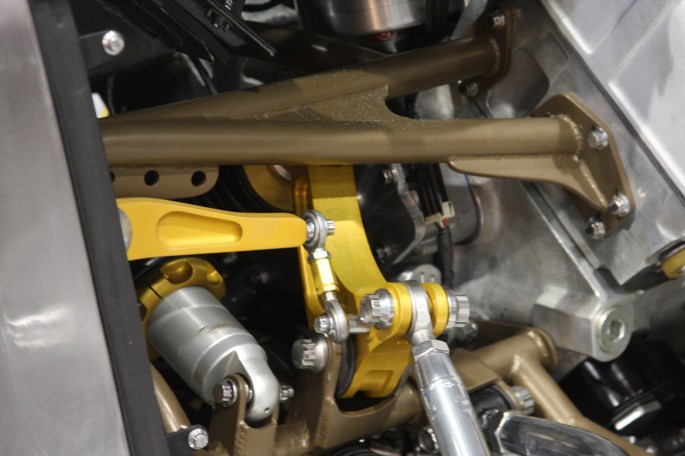 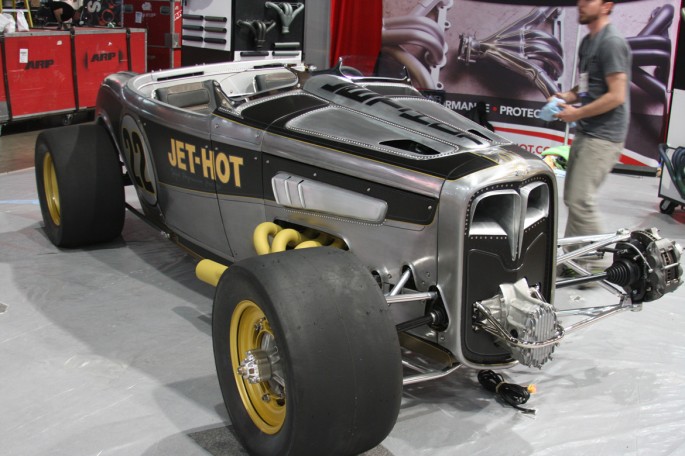 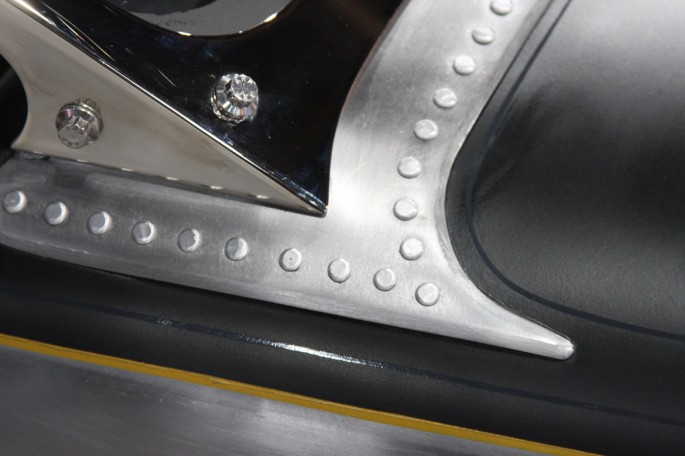 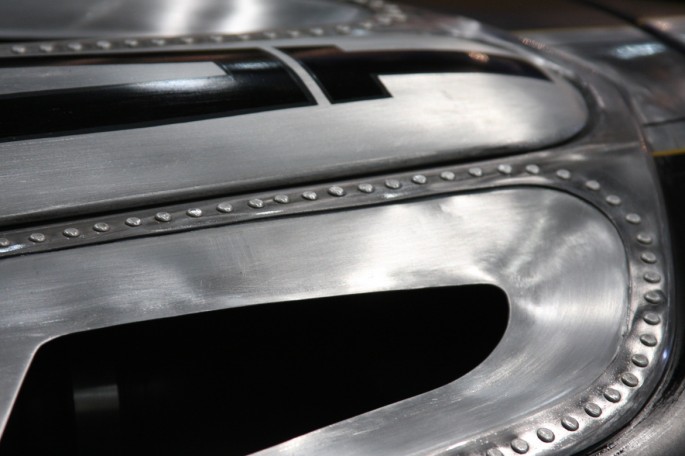 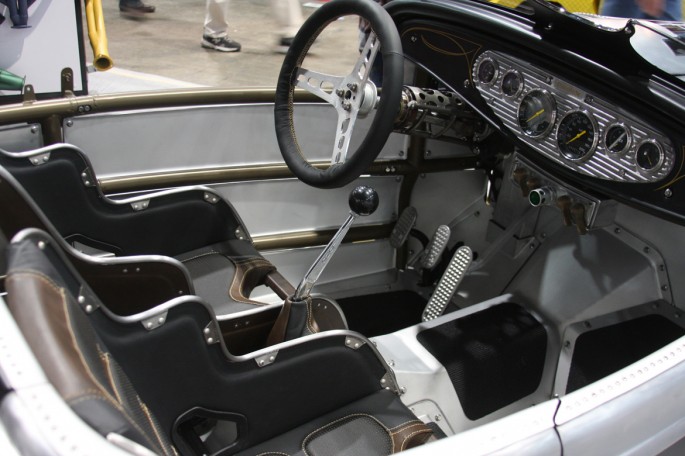 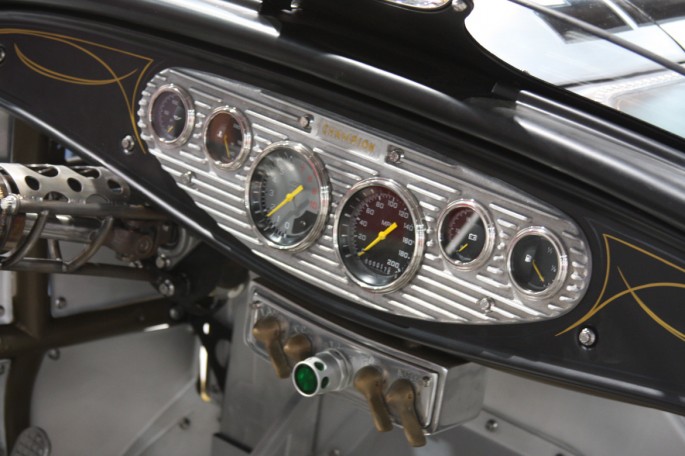 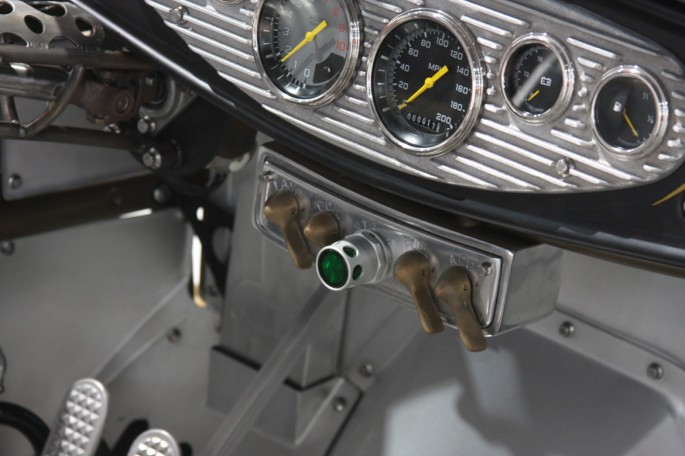 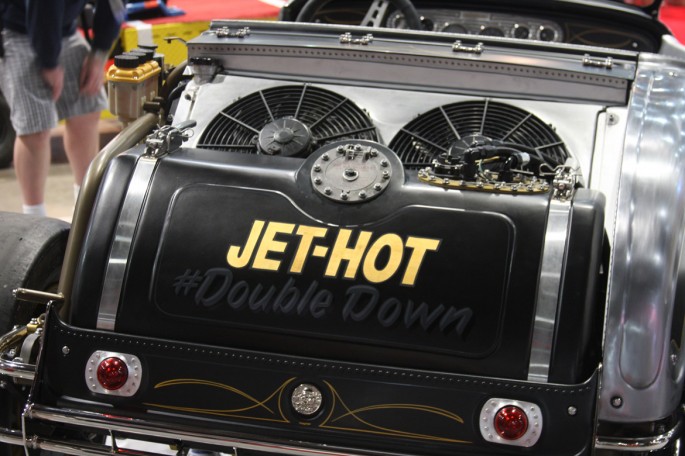 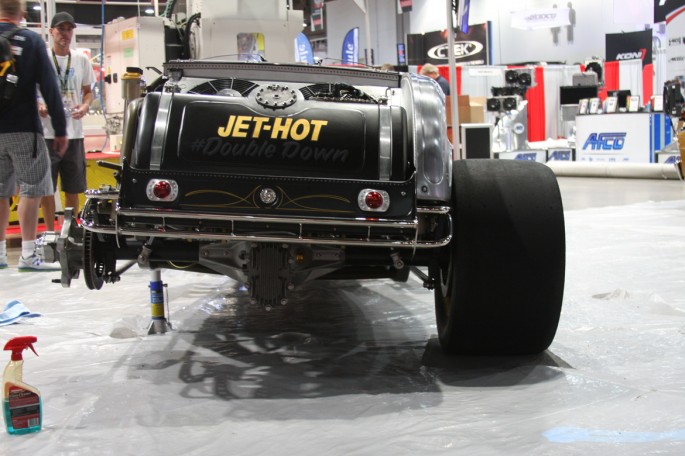 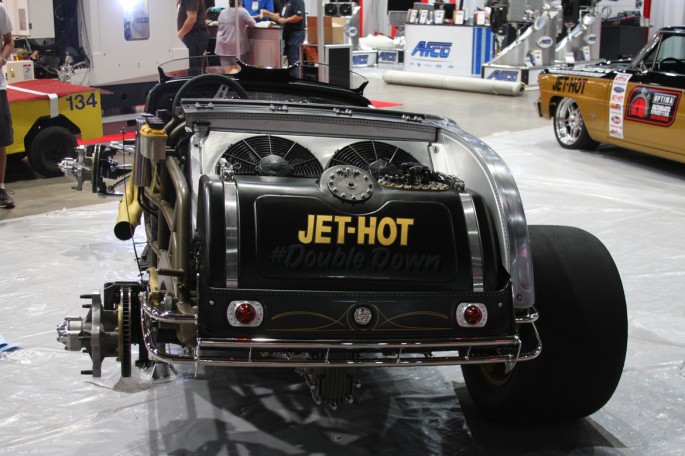 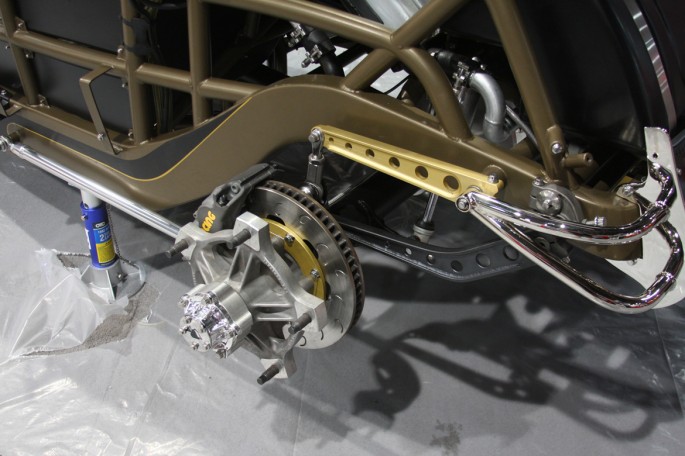 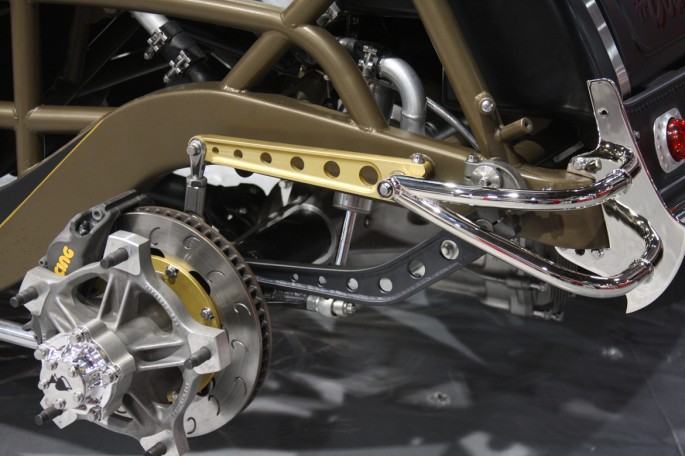 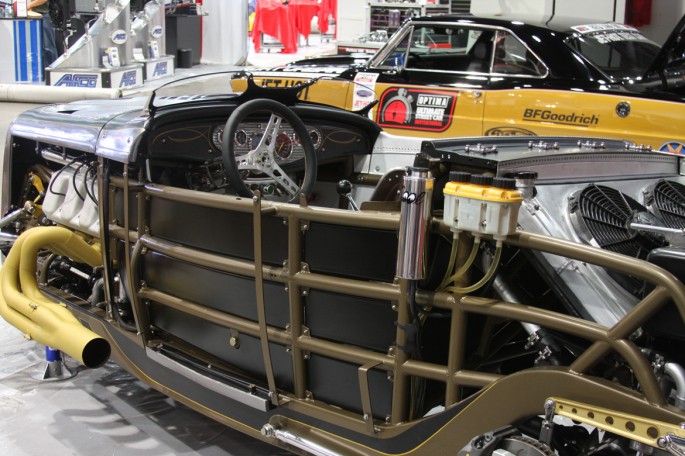 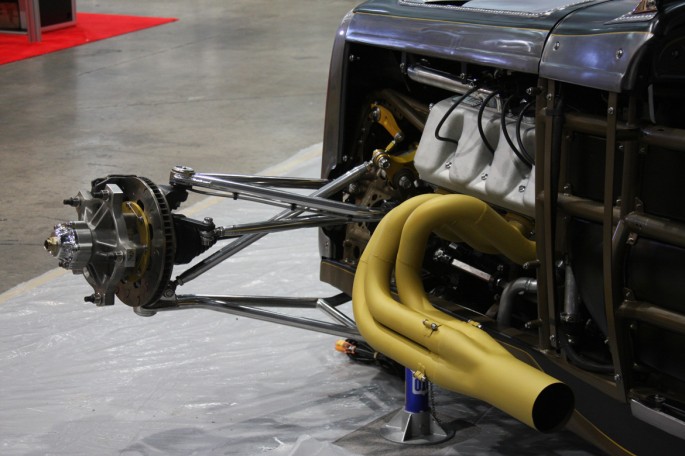 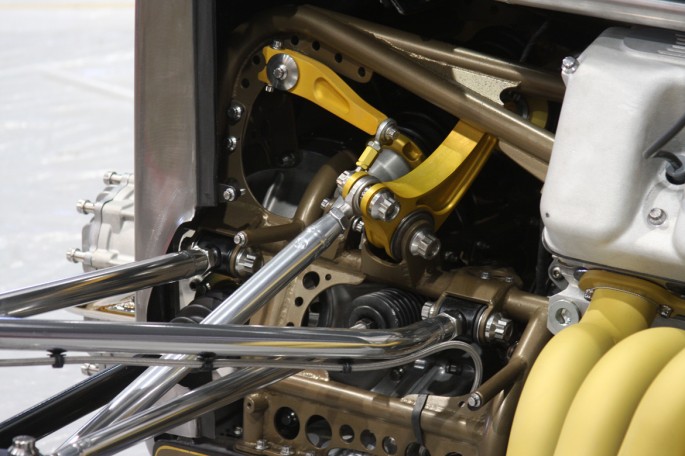 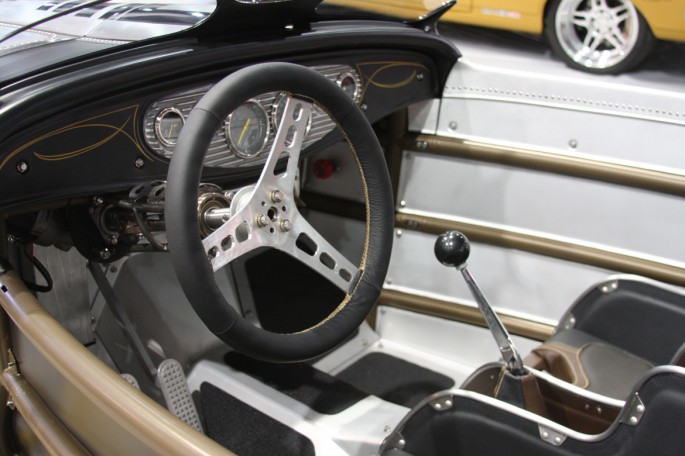 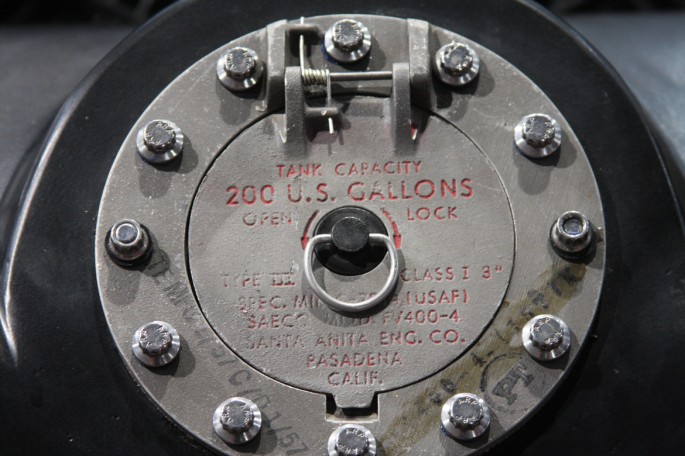 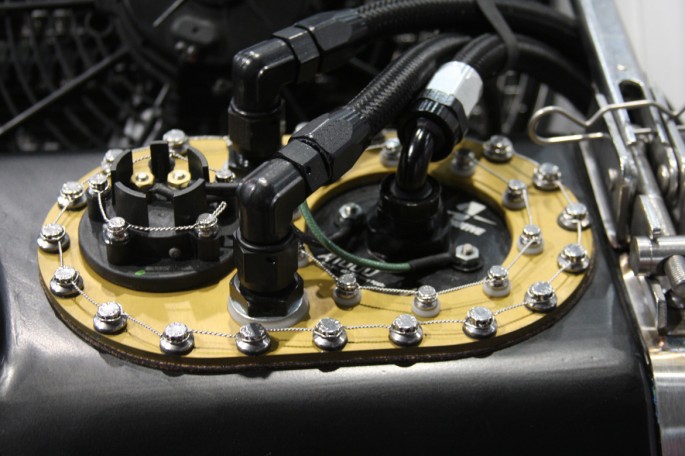 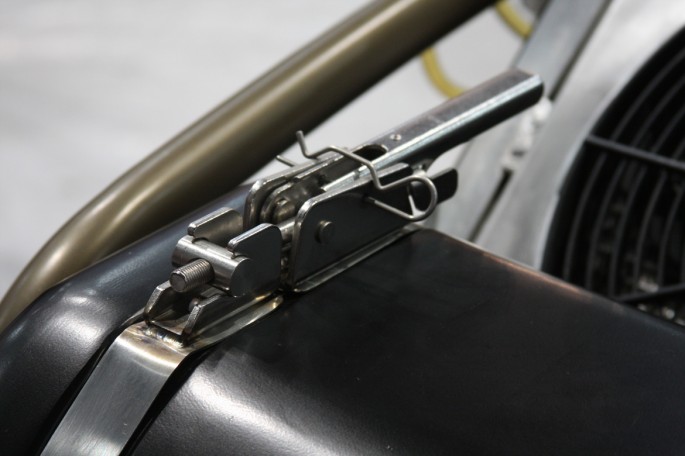 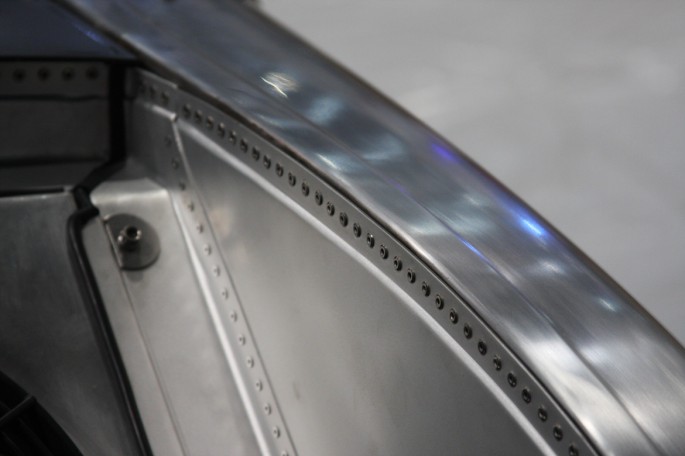 SEMA 2014: A Fresh Batch Of SEMA Cars And Truck From Inside AND Outside The Las Vegas Convention Center Chevrolet Unveils Special SEMA Corvettes, Camaros, And Trucks And We Have Photos

6 thoughts on “SEMA 2014: The Jet Hot Double Down Roadster Half Naked! The Car Runs, Drives, And Even Picked Up Some Style Points”