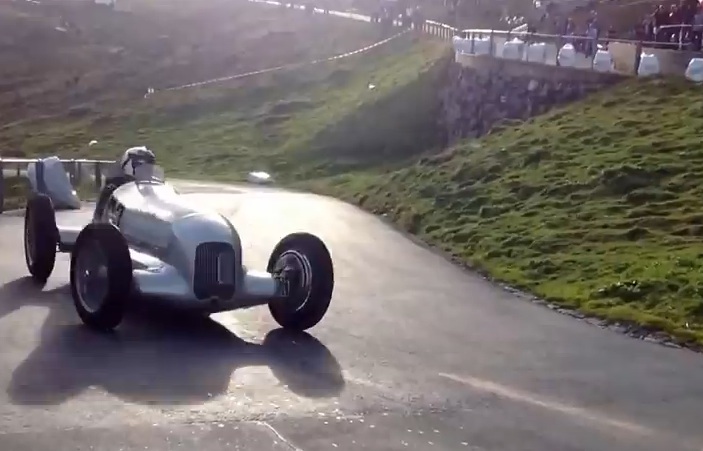 We have to thank long time BangShifter Arild Guldbrandsen for sending us the below videos that feature a 1934 Mercedes W25 Grand Prix car darting up the course at an incredible hill climb event that is held in Switzerland (we think). The event apparently recreates some races that took place on the amazing mountain roads that run through the Klausen pass after the turn of the 20th century. From what we have been able to discern from the website, the entries are either approved or chosen and it is limited to awesome historic cars. There’s no clap trap stuff here. In the case of this video, we get to see an hear one of the more famous racers of all time in the form of the Mercedes W25 which was built to run for the championship in 1934 and when there was not a formal championship that year it came back in 1935 and whooped up on everyone again.

Powered by an inline eight cylinder engine that displaced about 3.5L and wore a blower, it produced more than 350hp and it sounds absolutely magical. The fact that the camera position is so good in these videos helps as well. We get to watch the car snake through the road with the driver working the throttle while the miniscule tires fight for grip and we get to hear the sounds of this racer literally bounce off the mountains as it climbs ever higher until it blasts right by the camera and pulls a couple of gears down a long straight. There is a legit rasp to this thing and the blower screams like nothing we have ever heard before. It seemed weird to us at first that the guy was so jumpy on the throttle until you start to watch the racer up close and you realize that every time he leans into it, the car is roasting the tires at will.

Today’s F1 drivers are amazing and they have a skill set that the guys in the 1930s did no consider but we’d argue that a 1930s guy would get the hang of a modern F1 car and be fast in it long before a modern guy got the hang of the 1930s car and got “fast” in it. Germany in the 1930s was rapidly “getting weird” and their auto racing programs through Mercedes and Auto Union were viewed as important by a government trying to get the point across that the country had the best technology in the world. Outside of airplanes in the 1930s, race cars were the most cutting edge machines around. For a brief time, this was the best of the best.

PRESS PLAY BELOW TO SEE THE 1934 MERCEDES W25 THUNDER THROUGH A SWISS MOUNTAIN PASS!