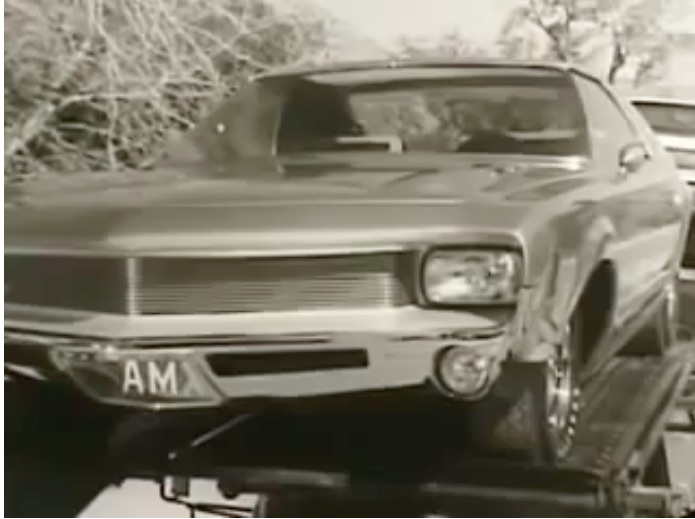 This is one of those perfectly campy and goofy 1960s car commercials that we love looking back on and watching. The ad here has some humor, a gloriously wacky concept, and one of the most beautiful concept cars any manufacturer has ever built.

The concept is weird in the fact that two truck drivers get into a yelling match when one will not move. They jump out of their trucks only to discover that they know each other. Randomly…in the middle of nowhere. One is headed to NYC and the other is headed to LA. There they are, instant pals. The guy hauling the AMC cars out west is driving a sweet International truck to yank them all around and he gleefully takes the other guy on a tour of his inventory starting with that beautiful concept car we talked about.

At the time this commercial was made the AMX concept was just being seen by the public for the first time. Response was so enthusiastic and passionate that the company would go on to build the car and sell them in strong volume for a few years. In fact the AMX kind of became the staple AMC entry into the muscle car world, especially with its big block engine option.

Working their way around the rest of the trailer we get a look at a couple more models before the hauler driver hits the highway…with an accidental passenger.

The Lewis Winch Has Been Around For 50 Years, Rules, And We Knew Nothing About It - Video Video: Watch A 427ci Blown Ford SOHC Motor Make 880hp On The Dyno

One thought on “This Vintage AMC Commercial Is Fun – See The AMX Concept and More – 1960s Camp!”