The Racing Line! Pro Driver Randy Pobst Plays Teacher To Those Who Like To Hang The Back End Out! 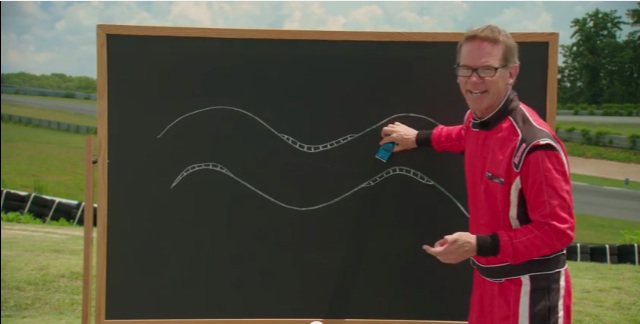 Randy Pobst seems like one of those guys that everybody seems to like. He’s friendly, he has driving skill that only comes with thirty-some years of racing under his belt, and he comes off like the gearhead version of Bill Nye, The Science Guy. He has that gift few people have, the one that encourages people to listen to him explain things. Part of it is because he truly knows what he’s doing when he gets behind the wheel, and part of it is that approachability…he isn’t rubbing his racing career in your face, he isn’t super-competitive, he just wants to teach. And Motor Trend decided that they would let him, and gave him his own show to do just that. Called “The Racing Line”, this new series will allow Pobst to explain the science and dynamics of what’s going on behind the wheel.

For his first show, Pobst went for a home run guarantee with oversteer. We love oversteer…there is just something about hanging the ass end of a car out in a controlled manner that drags us right back to every intersection we turned at in the rain when we were in high school. (What…just me? Liars!) I hate to use this cliché, but Randy makes the learning fun in the only way he knows how: a quick classroom lesson, followed up by hands-on experiments. He even brings in Irish drifter Darren McNamara to show how it is properly done. This is educational television for gearheads, so hit play below and be careful, you just might learn something!

Sinkhole Be Gone: The National Corvette Museum's Skydome Will Reopen September 3rd! Ebay Find: This "1971 'Cuda" Conversion Isn't All That It's Cracked Up To Be, And Leaves Us With More Questions Than Answers

2 thoughts on “The Racing Line! Pro Driver Randy Pobst Plays Teacher To Those Who Like To Hang The Back End Out!”