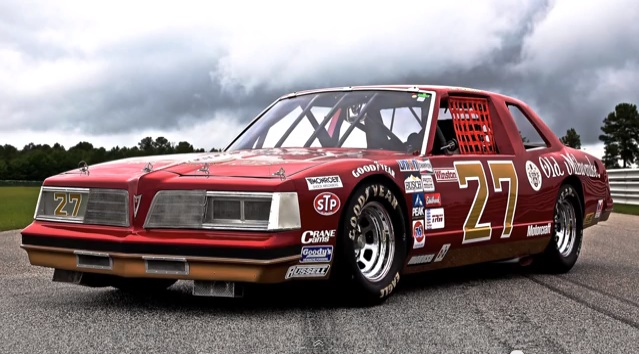 Tim Richmond isn’t a name that immediately springs to mind when NASCAR is involved, but the story behind him and this NASCAR Pontiac LeMans car is a unique one. Richmond, a playboy and in some ways a gentleman racer, had been messing around with open-wheel cars since 1976 with little luck and had made friends with drag racer Raymond Beadle when, in 1980, Pocono Raceway president Joseph Mattioli suggested that he give NASCAR a shot. Between 1980-1982, Richmond drove with small, incremental successes, but in 1983 Beadle bought a NASCAR team and hired Richmond on as a driver. Wins and pole positions started to rack up before Richmond jumped ship to Hendrick Motorsports in 1985. His best season was in 1986, and unfortunately it was also his last. He fell ill after the 1986 NASCAR banquet, and though he tried to make a comeback in 1987, winning at Pocono even, by September 1987 he had resigned from Hendrick and had shut himself up inside his Florida condo. Richmond passed on August 13th, 1989 from complications as a result of AIDS.

In this video, former Richmond crew member John Dodson shares stories about his time working with Richmond and the crew during the Beadle era. His memories of working on the Pontiac during the times where NASCAR was more of a Southern sport than the big deal it is now are priceless, and you get a small insight to some of the politics of the day, including Pontiac’s interference with the Grand Prix and the Grand Prix 2+2 body shells over the well-loved LeMans.

Click play below and enjoy a look into the stories of a small NASCAR team!

Tunnel Ram VS The World! Dual Plane, Single Plane, Or Tunnel Ram? Which One Is Right For A Big Block? Wide-Eyed: A Beauty Of A Rambler American Getting Sorted At Route 66