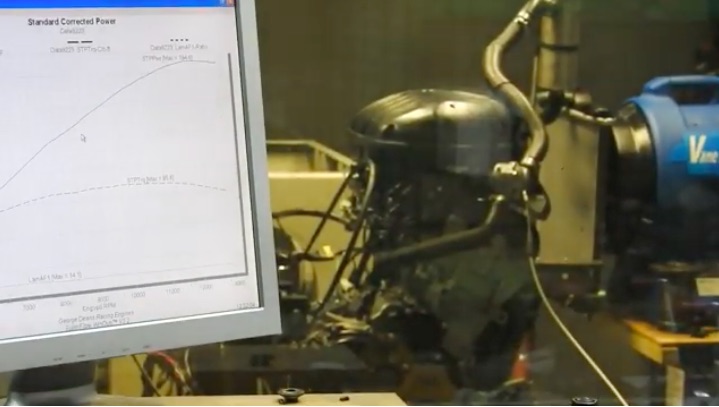 Back in my road race announcing days I used to really like watching the SCCA amateur classes that featured open wheel cars. From Formula Vee right on up, those cars put on a heck of a show and really seemed to capture the essence of serious competition that non-millionaires could afford. That tradition continues in the SCCA today with the Formula 1000 class. These cars look as serious as they run with full racing aero, suspension tuning, and neat technology. The major component in the success of the category is the fact that every car must use a 1,000 CC motorcycle engine for power. If that sounds lame, realize that they only weigh 1,000lbs and it starts to sound fun in a hurry.

Like every “spec” class there are guys out there that build killer engines that make peak horsepower while working within the tight confines of the rules. This video features one of those high strung engine working on the engine dyno and like your lawn mower, the harder you rev it the better it runs.

We’re not sure what the make of this bike engine is but we do know that it has been worked and tweaked to make more than 180hp at over 10,000 RPM. The driver of the car has to keep the thing up on song to really get the most out of it which means plenty of shifting and plenty of work to carry momentum out of the corners to be fast.

A precision engine for a class with precision built chassis and hardcore drivers, this has to be a fun show to watch. We want to try it out!

Listen To The Awesome Noise Of The Famed Novi V8 Indy Car Engine In This 1963 Recording - So Cool! Edd China's Workshop Diaries: Why The Hell Is Edd Putting A Diesel Engine In His Electric Ice Cream Truck?