Inspecting A Weirdo: This Teardown Of A High Mileage VW W8 Engine Is Revealing and Interesting 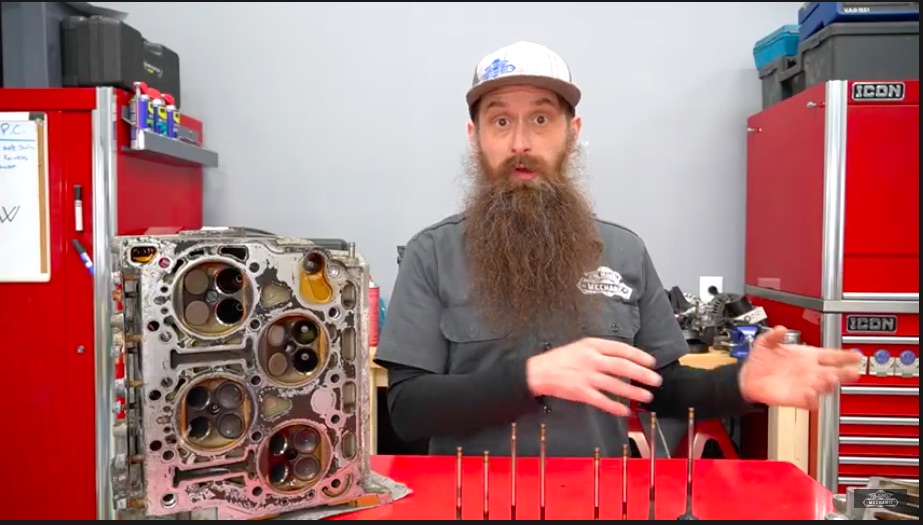 Now this is a trip into the unknown, for us anyway. We have long known of the VW W8 engine (and the massive W-16 used in cars like the Bugatti) but we had never seen one taken apart and torn down, until now. This engine was always described to us as being “two VW VR4 engines mated together with a common crankshaft”. The good news is that we did not get false information, the bad news is that beyond one simple statement, we had no idea what was going on inside this thing. The engine is in-fact two 15-degree VR4 engines that are mated at a 72-degree angle. What this all means is that you have some massive cylinder heads to deal with, a really interesting block to try and get sealed and built in sections, and chains everywhere. Chains driving the cams, chains driving the oil pump, chains driving every damn thing.

We have no skin in the game as far as these being “good” engines or “bad” engines but we do know that they are amazingly interesting and the fact that a car company would look at the original concepts for this thing and plow ahead with it and then commit to making it for a number of years is even more awesome. For the record, this outwardly huge engine displaces 4.0L and was factory rated at 270hp. We have never seen anyone hot rod one of these things and we’re not sure if there are even parts made to do that job but it’s a neat if not weird engine.

What caught our attention the most? The block and bottom end construction is completely mental. It is complicated, weird, and seemingly a bad idea, but it it all works!

NHRA Insider Podcast: Greg and Guido - Inside the Hearts and Minds of Champion‪s‬ Alex Taylor Is Aiming For The 6's In A Street Car, But It Won't Be In Her Camaro

One thought on “Inspecting A Weirdo: This Teardown Of A High Mileage VW W8 Engine Is Revealing and Interesting”