Unhinged: A Nod To The Big Brass Balls Era 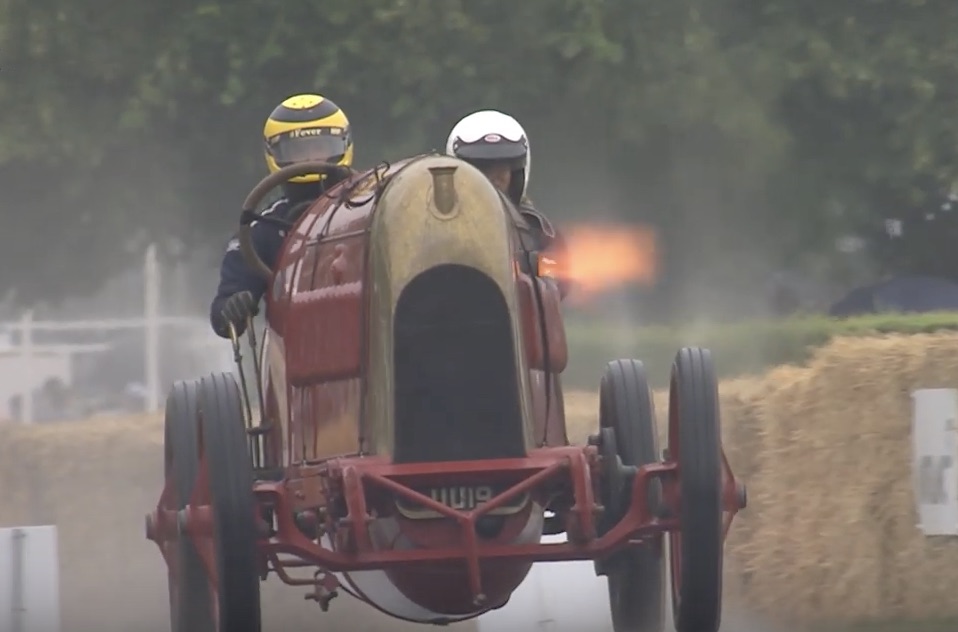 Regular readers should be familiar with this red flame-belching beast of an early racing car. It’s the 1910 Fiat S76 Record, better known as “The Beast of Turin”. Nevermind that it’s an old racing machine that, post restoration, still gets thrown around like there’s no tomorrow. And don’t be worried about the fact that this 108-year old car has a four-banger that displaces more that four Chevrolet 427 big-blocks on hand. I want to take a moment and think about one thing only: how loud did the equipment on the driver and mechanic clank when they walked up to this machine back in the day in preparation to race it?

At the 2019 Goodwood Festival of Speed, the S76 got a wet pass up the hillclimb section…not the most ideal setting when you have 290 horsepower going through tires barely as wide as a human hand using technology from the beginning of last century. Certainly not ideal when you’re wrestling around an engine, frame and not much else while managing gears, ignition timing, and planning every move of the wheel and application of the brakes at the same time. Driving the Beast looks like it requires the zen of the Buddha and the concentration of a 12-year-old playing video games…no wrong moves or this will not end well.

It’s impressive today. But imagine how impressive it was in 1910. Automobiles were in their infancy. Horses still ruled the day for most. But out of the blue, two individuals are going to sit inside of a four-wheeled contraption wearing little more than heavier coats and goggles made of glass and are going to race it on dirt roadways, sandy beaches and wherever else the brave dared to try it out. The noise must’ve been like the first time you heard a cannon fire off in real life. The vibrations from each explosion would’ve reverberated through the crowd. 1,730 cubic inches of “I’ll go as fast as I damn well please” is jaw-dropping today. In 1910, it must’ve seemed like Fiat had entered a deal with the devil.

Incredible Dyno Video: Watch More Than 25,000hp Get Put To Work On A Hub Dyno! Vanlife: This Power Stroke-powered Ford E-Series 4x4 Is The Base To Your Base Camp!

One thought on “Unhinged: A Nod To The Big Brass Balls Era”