Unhinged: Someone Messed Up And Let Us Drive A Stock Car 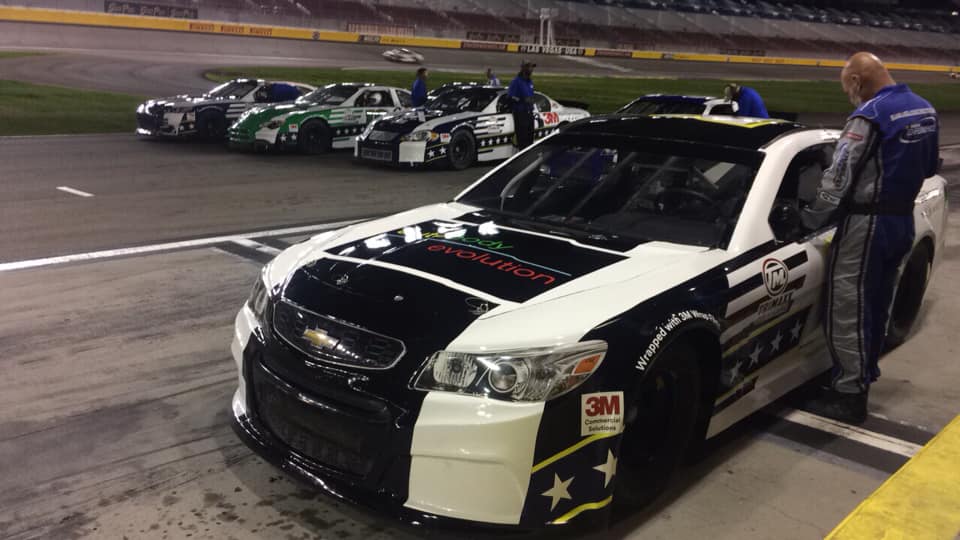 The question was simple enough: would I like to drive a stock car during my time at SEMA 2018? The answer was just as simple: oh, hell yes. Nevermind the break from the Convention Center, the crowds, and the smell of the casinos, but it’s not like I need an excuse to want to drive something with a hairy V8, a four-speed, and a penchant for doing triple-digit speeds with ease. The folks at McLeod Racing had stuck a deal with the Richard Petty Driving Experience’s Las Vegas team and had a bus waiting for the invited few to board at the end of the show on Tuesday night. With camera in hand and a hoodie over my shoulder for the cooler night weather, I got on the coach and soon enough we were pulling through the tunnel that leads to the infield of Las Vegas Motor Speedway.

Before we dive into the ins and outs of what went down, let me say foremost: I’m easily a critic of NASCAR in general. Nothing against the speed or the skill necessary to drive, but as a whole, that motorsport does very little for me. One directional turn, staged sections, and a kind of wrestling-like showmanship that has to be balanced with the perfect polish of a walking advertisement from the drivers has turned me off. Nevermind the cars themselves…I lost interest in the cars of NASCAR right about the time the Chevrolet Lumina took over from the Aeroback’d Monte Carlo SS. They were sticker cars, shells made up to look like some random vehicle. That’s from a fan viewpoint. But with the chance to actually get behind the wheel, I was excited nonetheless. 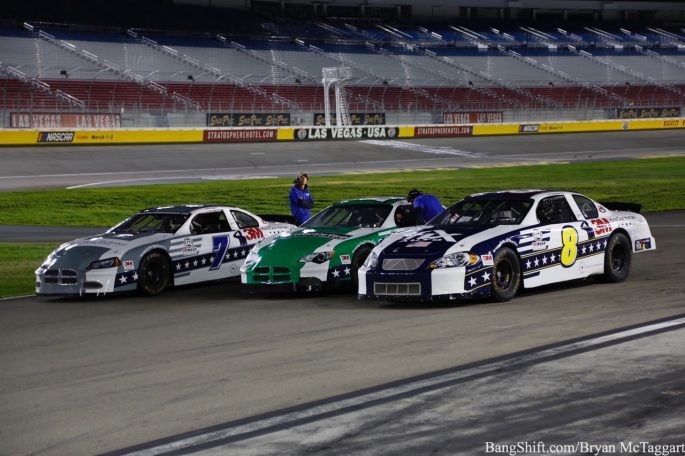 The vehicles that the Petty Driving Experience uses are a mixture of three different generations of NASCAR racer: Gen 4, which fielded a couple older Toyota, a couple of mid-2000s Chargers, and one or two Fords; Gen 5 (a.k.a. Car of Tomorrow), which was mostly Chevrolets and Toyotas, and one or two Gen 6 machines. All of the cars are powered by the “Crate 602” Chevrolet 350 circle-track crate mill (p/n 19248602 from GM) that is good for 350 horsepower, just under 400 ft/lbs of torque, and about 5,500 RPM of total sweep. If they adjusted the engines any further for this application, it was hard to tell and it wasn’t like we were going to find out…all of the cars we got to drive had rev limiter chips installed that killed the fun at 5,000 RPM. The four-speed manual and quick-change rear axle are more than capable of handling the power from the engine, and with a chip change, these cars are capable of 170 miles an hour or more. Keep in mind two factors here: these are cars that are driven by anybody who has the coin to pay, and that they have to keep these machines up and running for longer than any NASCAR team ever has to experience. 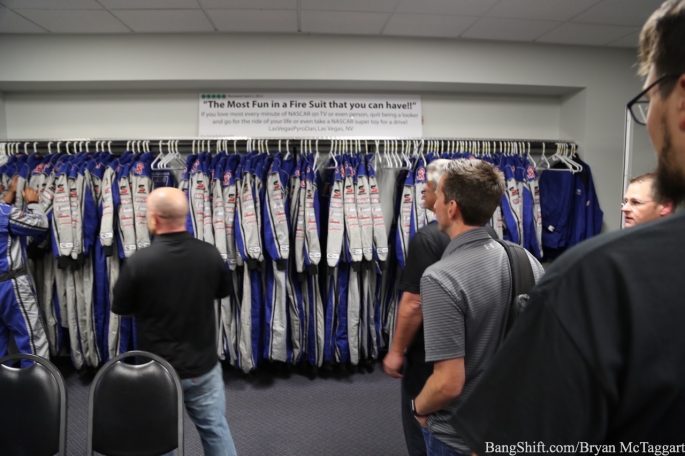 Once off the bus, we are all shuttled into the building, where we turn over our driver’s licenses and get fitted for a fire suit. After some downtime waiting for another group to finish up their running, we are shown a video that is narrated by several NASCAR Pit Crew Chiefs that explain the rules of the game, how to properly drive the track, the proper way to interact with the spotter that will be helping you get the best performance from your machine while keeping you safe, and safety rules and information needed prior to heading out to the pit wall. We are then informed that whoever gets the fastest top speed out of the merry band of misfits will get $200 from McLeod Racing right there, on the spot. Hmm…I would like some of that action. Ok, let’s get into the cars!

From here, it’s time to get to the track. We go out to the pit wall and wait to be called up to be fitted with a helmet that has sound-muting headphones and a headset/mic system that is incorporated into the car’s push-to-talk radio system. We then wait for the pit crews to get the cars ready based on our physical size…because NASCAR seats are hard-mounted with no adjustment whatsoever, the Petty Driving Experience has several cars that are fit from mini to mighty. In my case, I was given the #7 Dodge, which you can see in a picture above. As soon as they are ready for me, I hop the wall and I’m walked out to the car. Once the crew fit me with a HANS device, it’s time to make my ever-so-graceful entrance into the car. I’m used to going through the window to get into vehicles, but on a NASCAR you have to re-think the steps. Normally, it’s right leg in, left leg in, and slide down, pulling your arms through last. Not with old number 7…I was stuck in the window, my right arm hung at the elbow. My only recourse was to come back out of the car and to try again. Go figure that the one thing I’ll do with this machine that won’t kill me, I screw up. Once I’m settled in and strapped down, the car is fired up. The sensation is like being in an unmuffled derby car so far. One big tachometer, one cue-ball shifter attached to one of the best manual shifters I’ve ever rowed and three pedals are all I need to know. Once my radio line is plugged in, I get a booming voice in my ear barking out instructions: take off, shift at 3,000 RPM, get into fourth before the backstretch, don’t come off of the apron until I tell you to, so on and so forth. To ensure that the spotter knows you are receiving his transmissions, every last instruction requires me to hit the switch and respond with “10-4!” Which wouldn’t be too bad if I wasn’t trying to compete with a small-block Chevy at song for his attention. 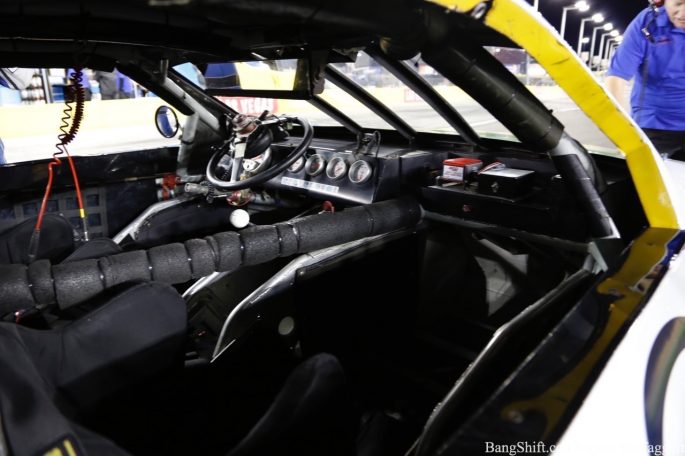 As we progressively ramp up the engine’s RPM from 4,000 to 5,000 throughout some dial-in laps, I try to figure out the Dodge’s dynamics. On the straightaways and less-banked areas, you have to actively balance the car with right-turn input to keep it straight. Coming into one of the banked turns, the steering tries to make a harder left and you’re now balancing speed and steering. For these machines, you do not lift in a corner…if you enter slow, you progressively walk the car up the hill. If you touch the apron in a corner, you’ll undoubtedly smack a wall with whatever happens next. There are guide dots on the track that help position the machine five feet from the white apron line, and it’s best to follow those dots for the best entrance-exit program. Sounds easy, right? I’d say it would be easier if I could’ve re-positioned my hands for a realistic 9/3 hand position once I figured out how the car behaved. But to do that would’ve meant ignoring the push-to-talk button. I don’t talk, spotter remotely shuts car off, I’m escorted off of property for not following the rules. So instead it’s a wrestling act at full chat while I’m constantly barking off “10-4!” At one point I almost wanted to interject some comedy into this back-and-forth…”Hit the pace car?!” At least all of the instructions and comments I’m receiving are positive…”You’re maintaining an excellent line!” and “Excellent throttle control, good job!” break up the constant stream of “Five feet from the apron line!” and “Position in the center of the next two corners!” 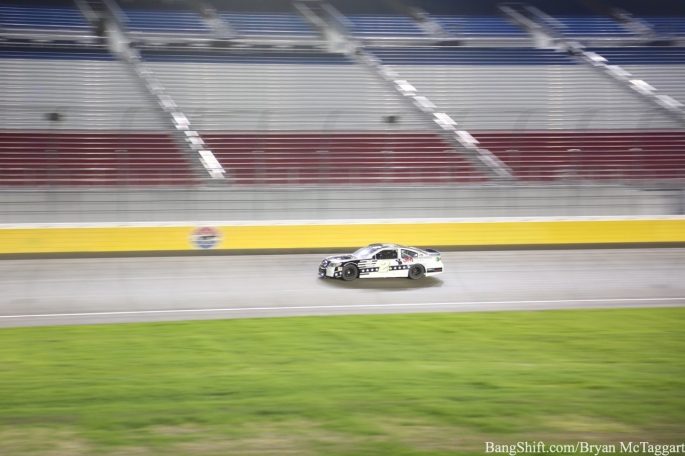 Something not mentioned in any brief is that one of the in-house drivers will come out in a car with a hotter chip in the system and will pass you like an aggressive driver in afternoon traffic. The spotter is great help in letting you know where the car is relative to your own position. Good, because as he’s rattling off that information, my brain is refusing to look up at the rear-view and is focused on keeping this iron bastard from twitching it’s way onto a YouTube video I do NOT want to star in. At this point I’m at the top of the tachometer, as far as they trust randoms to go…anything over 5,000 RPM and the limiter cuts in with a rude barking and shudder. As you’re whipping around banked corners, with precious little view of the track ahead, you’re balancing on the fringe edge of acceleration and bla-ta-ta-ta noises.

Then, eight minutes after you started rolling, it’s the end. The spotter informs you that you’ve “taken checkers”, indicating that your race is done…except, it ain’t. You stay flat-footed until you’re rounding Turn 2. Then you come out of throttle, merge to the apron (again, when directed) and cruise to Pit Lane, where you’re ordered to find neutral and coast to a directed stop. After an even more unrefined exit from the car, my Pit Crew assistant informs me via the spotter that my run was very impressive and that I should be proud of what I just did. On a high, I ditch the helmet, shed the fire suit, and go collect my license and the slip that tells me just how well I did… 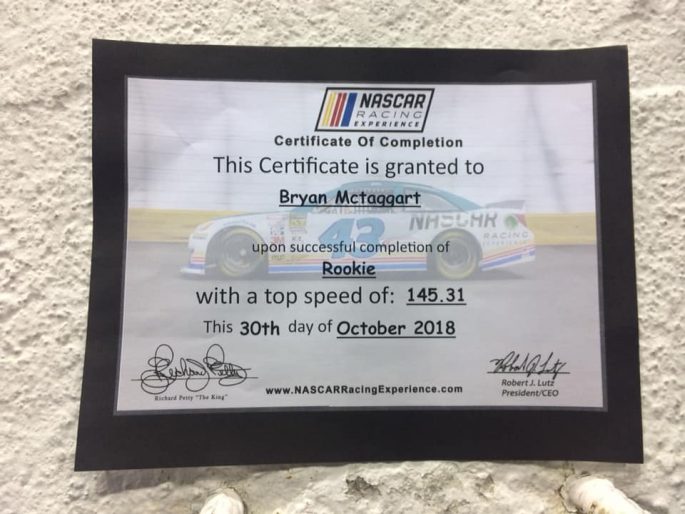 I wasn’t the slowest, but the guy who ran 154 miles an hour took home two bills and the bragging rights. But I wasn’t bothered. They might be a shell shape of a car and nothing more, but that doesn’t take away that a NASCAR is still one hell of a machine to actually wheel around. The way the car stayed hooked to the surface at speed is impressive and after a couple of settle-in laps, you want to push a little harder, just to find a little more grip, a little more of that rope that you can wind up hanging yourself with.

Speed is a drug, one I’ve been familiar with ever since I was a little kid surrounded by older family members with fast machines. 145 MPH is not the fastest I’ve ever been…my personal best is just over 170 miles an hour in a Corvette. But that ‘Vette was on flat, mostly straight…um…well, it certainly wasn’t on a high-banked superspeedway that impacted my body with new types of G-forces during cornering. You’re amazed at both what it does and what it doesn’t do. The car isn’t as twitchy as you might expect, and it’s not a beast of a machine to drive, either, The throttle isn’t an instant smoke machine and it isn’t hair-trigger. The brakes are excellent (they had damn well better be) and the siren song of an engine in it’s upper register is intoxicating. I’ll still criticize NASCAR for using silhouette race cars. But I can’t knock the cars themselves. They are just that much fun to wheel around. 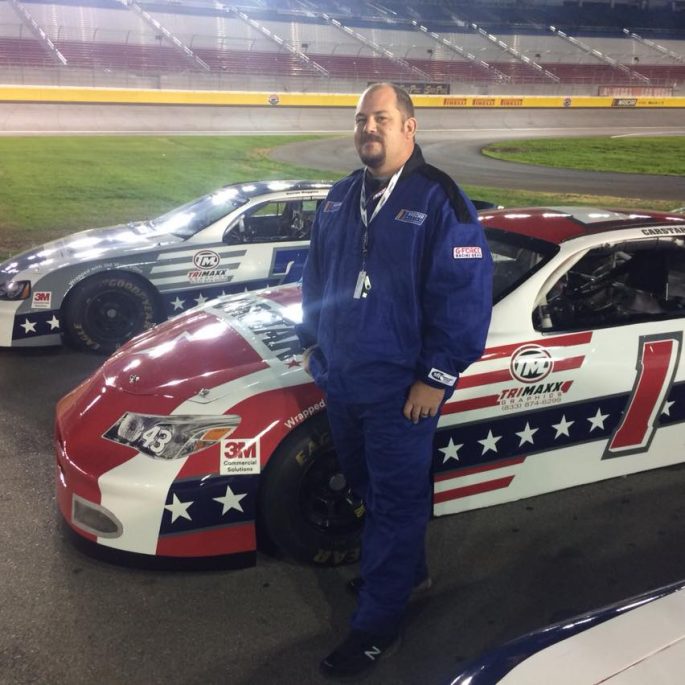 2 thoughts on “Unhinged: Someone Messed Up And Let Us Drive A Stock Car”