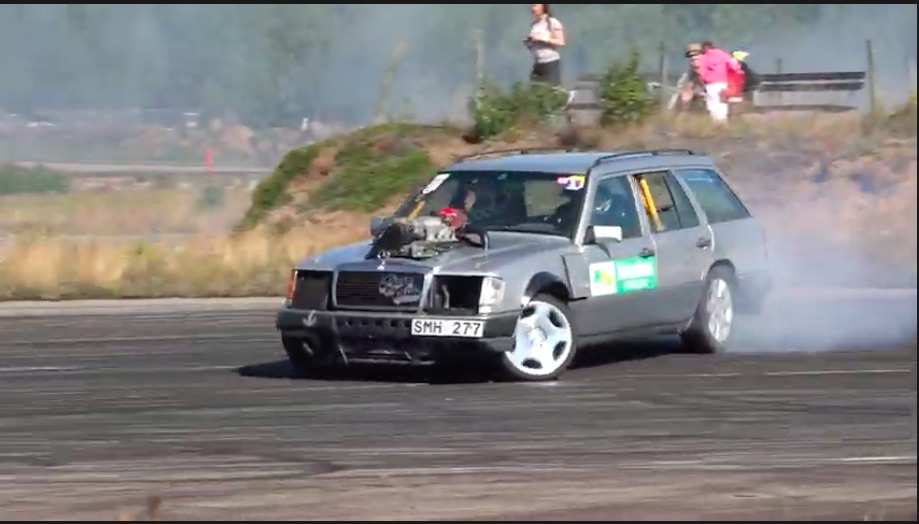 We’re reasonably sure that over the course of the last few years we have showed you this cool Mercedes W124 drift wagon in action. What we have not seen, though is the current power plant in the car which is a Mercedes V12 with a monster supercharger on top of it. The setup looks homemade as it is way  out of the hood and the boost tubes do not look like they are OE in their style and placement. Don’t get us wrong, we are not knocking it, this car is freaking awesome, we’re just trying to make heads or tails of it.

The driver is at what seems to be an open track day and clearly they’re working on managing the power and getting the feel for drifting the car with this torque making power monster under the hood. From the start to the finish we see the driver getting better and better with each corner. Listening to him work the throttle is cool because the blown V12 is the loudest thing on the track by a ton, so you can totally hear him modulating the gas pedal to get the car sideways and keep it there at times.

We don’t have any specs on the engine but we’d have to guess it is making at least 500hp and the torque numbers have to be larger than that. As for the blower? We have no idea where it came from or what it was on first. We just know that we love it coming through the hood of this wagon.

Why Do Nitrous Pro Mods Make Header Flames? Why Do They Blow Up? Let Rickie Smith And Shannon Jenkins Tell You! Glorious Noise: Watch This 20V149 Detroit Diesel Fire Up And Then Get Run At "High" RPM!