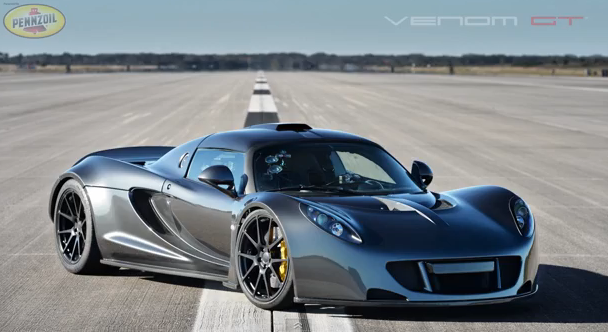 Chances are that you already know what a Hennessey Venom GT is but if you don’t, here’s a rough sketch of what the $1-million dollar super car is all about. It starts life as a Lotus and is then modified in the suspension department, carbon fiber body panels are added and the whole works is repowered with 1,200hp twin turbo LS engine. As you’d expect, the performance numbers of the car are completely nuts and on the level with the mighty Veyron, but since John Hennessey is a racer and a guy who clearly knows how to make headlined, he wanted to nab the title of the world’s fastest production car for his Venom GT. He needed lots of room to do it and the perfect location turned out to be a runway formerly used to land space shuttles at the JFK Space Center in Florida. Measuring out to more than three miles in length, this runway had enough room to lay the throttle flat in high gear for as long as the boys needed to in an effort to lay waste to the Veyron’s top speed of 254mph. The Venom GT blasted to a terminal velocity of 270.49 mph. Holy bleep.

The video is cool, albeit a bit on the dramatic side using JFKs famous inauguration speech in the background to get the hairs on your neck to stand up. Granted, it worked on us but that speech about sending a man to the moon by the end of decade is a little heavy when talking about how fast toys for the ultra-wealthy can go. Watching the speedometer that is on screen bend up past 200-MPH like it is 60 is something but even more interesting is seeing how the acceleration slows the faster the car goes. That thing was really working to clip 270 and there wasn’t much room left before that happened. Truly amazing stuff.

Hennessey has sold 11 of the Venom GT cars with a plant to build a total of 30. Maybe this will help move a couple more. After all, what billionaire wants to be embarrassed by having the guy in the other lane pull away from him at 250mph. That would be a sad story to tell at the illuminati meetings.

PRESS PLAY BELOW TO RIDE IN THE HENNESSEY VENOM GT AS IT RUNS UP TO 270MPH!

BangShift Exclusive: Liam Garritty Unveills "Saturday Forever" A Cartoon Tribute To Vintage Drag Racing For Sale: 80-Acre, 8,000 Car Idaho Junkyard - Show Up With $3,000,000 And You Own It