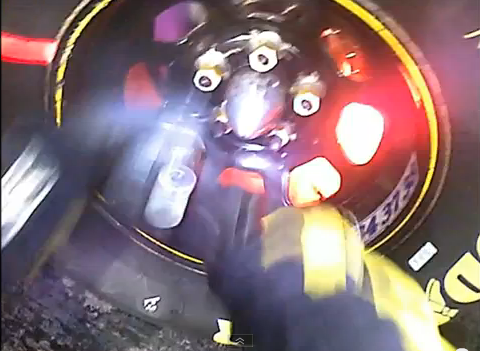 Ever since the Wood Brothers figured out decades ago that a drilled and organized crew could help them win races, NASCAR pit crews have become more and more specialized and athletic. These days, pro race teams recruit college athletes and we’re probably not far away from NASCAR holding a yearly combine like the NFL does for new players. This video is proof of both the athletic ability and sheer focus exhibited by the dudes that scale the wall at tracks all over the country every week in support of top level NASCAR teams in the Sprint and Nationwide series.

This video was shot with a helmet mounted camera on tire changer Chris Winchell’s helmet. The speed with which his job happens is freaking insane but the fact that he’s confronted with a brake rotor that is so hot it literally bursts into flames in front of him and he’s not the least bit delayed by it rules. Sure, the athleticism may have improved over the years, but the working conditions are still the same. When these cars come into the pits they are molten hot, pissed, and waiting to be let out at the first available nano-second. Winchell’s job is to minimize the number of nano-seconds spent sitting still. We’d say that guy is pretty frigging awesome at it.

Thanks to Chad Saindon for the tip on this video!

CLICK PLAY BELOW TO SEE A DUDE WHO IS BOTH FEARLESS AND FAST AS HELL!