Best Of BangShift: Watch An Angry Tow Truck Driver At A Circle Track Chase Down A Rogue Racer And Force Him Into The Pits 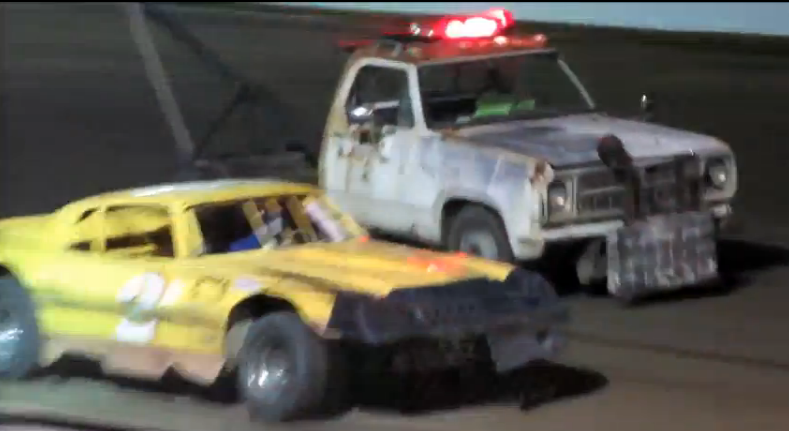 You’d think that a clapped out looking Dodge tow truck would be no match to catch a stock car on an oval track but you’d be wrong if the tow truck is being driven by a really pissed off track worker who figured that his sole mission in life was to force the rogue driver off the race track. Anger can make us do some pretty nutty things as can be seen all throughout this short video which was taken at an unnamed race track in an unnamed place.

Basically you’ll see the driver of the #2 Camaro start banging fenders right off the bat and that degenerates into giving other racers the ol’ chrome horn on purpose. Not surprisingly, the other competitors take umbrage with this and return the favor. Following that, the guy in the #2 has to be about unhinged inside the car because he gets into some low speed shenanigans with another racer and it was at that point that track officials apparently decided to lower the curtain on his evening of competition. The bad part was that the driver didn’t see this as a viable option so he stayed on the track….cue an angry track worker in an Dodge wrecker that looks straight off the set of the Duke of Hazzard.

As you will see, the dude in the wrecker comes out of the pits hot and keeps the truck on the wood until he pulls door to door with the racer, eventually getting the guy to stop by pretty much threatening to ram him if necessary. Taking a look at the truck, the driver must have thought the wrecker driver was serious because he comes to a stop, gets a tongue lashing and we think actually gets a cop out on the track to check into the situation. They may still be on the track arguing about it for all we know. The one thing about going to a sportsman level stock car race is the fact that you literally never know what the hell you are going to see on any given night. Sometimes it is great racing and sometimes it is high theater like this.

Speedy wrecker driver guy is our hero because we’re sure he would have straight up rammed the guy if he was forced to. It didn’t come to that but it could have.

One thought on “Best Of BangShift: Watch An Angry Tow Truck Driver At A Circle Track Chase Down A Rogue Racer And Force Him Into The Pits”