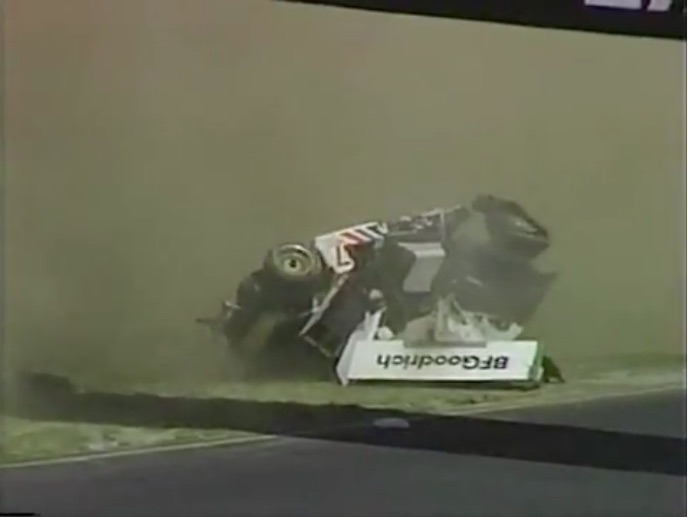 Many people only know Bob Wollek from just a single weird encounter he once had with a tv reporter during the 12 Hours of Sebring in 1985. Aggravated that he had been swapped out for team driver AJ Foyt in the rain, Wollek went on TV and said some unflattering things about Foyt who was in the process of running the team’s quickest laps of the race despite the deluge. Foyt had something to say after he got done but once the guys got past it they were friends for the rest of their lives. If that’s all you know about the fling Frenchman Bob Wollek you have a lot of learn.

The guy was about as bad ass a sports car racer as has ever come along. His career was dominated by competition in Porsches and that’s what we see him driving in this video from 1986. Wollek is competing in a mighty IMSA GTP-sped Porsche 962 and he’s doing it at Sears Point in California.

With racers like Jochen Mass and others as competition, Wollek had his work cut out and he took it all in stride. In fact, before a mechanical failure destroys his car and nearly takes him out along with it, Wollek had moved to the leadership role of the race. He was long gone and hard to find before the wreck.

Wollek’s fitness is mentioned multiple times in this video. He was likely the most fit guy on the track and maybe at the whole facility. He was an olympic level skier earlier in his life, always exercised, and took to riding his bicycle to and from races as a method of getting some fitness each day. Unfortunately while leaving Sebring in 2001 he was struck on his bike by a van and killed.

He was a hell of a sports car racer and you’re going to see him in some of the ultimate sports cars right here!

Billet Bad Ass: Watching This 1,500hp 20B 3-Rotor Race Engine Get Assembled Is Really Cool When The Announcer Becomes The Driver: Watch Mike Gallaway Pilot Bigfoot Around A Parking Lot Back In The Day