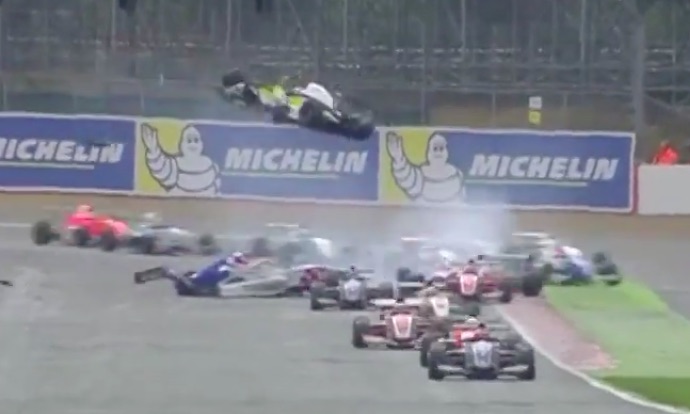 Cars are not supposed to fly, period. No matter what Terrafugia, AVE or The Dukes Of Hazzard taught you, automobiles were not intended for flight. But that doesn’t stop certain individuals from trying to bypass that rule, and generally, the results are impressive to look at and terrifying to be a part of. In this case, we have Ferdinand von Habsburg, who is, by the strictest definition possible, racing royalty (he is a member of the Austro-Hungarian royal family). von Habsburg was taking part in the first Eurocup Formula Renault 2.0 race at Silverstone Circuit in England when one accident led directly into his involvement in the second before the first lap had been completed. After Jehan Daravula dove straight off of the track and into the barriers, the safety car had been sent out to collect up the drivers. Unfortunately, this caused a bottleneck that von Habsburg was not prepared for. He struck the back of another car and after a brief flight, came crashing back down to Earth hard. He was removed from the track via stretcher, but later confirmed that he was uninjured.

Scrapple, Your Guide To The "meh"-worthy News: This Week, New Teslas, Stormtrooper Chargers, And Sergio Wants A Hug... This 1931 Ford Is Powered By An Old Diamond Rio Truck Motor and Has A Frame Made Of Old Light Poles - We Dig (Video)