Sep 07, 2015Brian LohnesBangShift XL, XL Street Truck FeatureComments Off on This 1931 Ford Is Powered By An Old Diamond Rio Truck Motor and Has A Frame Made Of Old Light Poles – We Dig (Video) 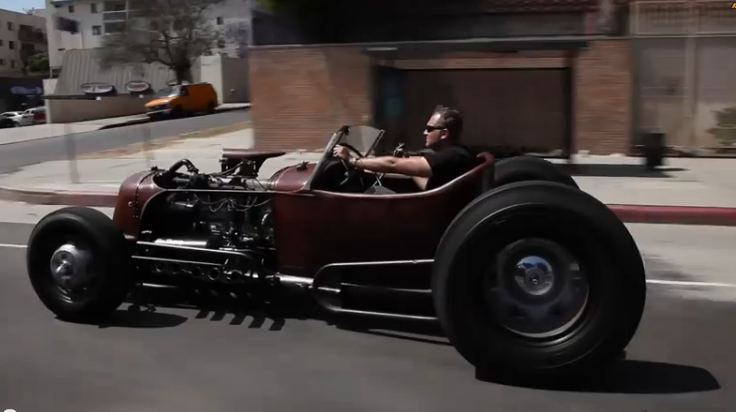 Mike Musto’s show “Big Muscle” on the YouTube Drive channel is a good watch. Every week he finds himself beating the stuffing out of a cool car in some part of the country. The cars range from typical muscle machines to hot rods and rat rods, etc. At least one of the cars we have featured here on BangShift has made it to Big Muscle stardom so we have similar tastes to Musto. In this episode he gets behind the wheel of a pretty cool rat-ish rod. The thing is finished better than some of the cartoony junk we saw at car shows this year and it has some elements that we really dig. Mainly the massive engine and five speed transmission which were scavenged from an old Diamond-Reo truck and an old White water truck respectively. The mill is a huge inliner gas engine that sounds absolutely awesome. Rated at 252hp it isn’t exactly a pro stock mill but the fact that it was rated at over 1,600 lb/ft of torque according to the owner.

Musto drives the car around and is honest in the fact that it is kind of a handful, it doesn’t exactly ride like a Cadillac, it has a six gallon gas tank, and handles like…well and old Diamond Reo truck. He’s not down on the car because of that but he’s also not glossing over the things that need to be mentioned. With our love of all things old and slow around here, this power train combo is totally our jam. Liberated from the bonds of the big truck, the motor seems pretty happy scooting the little car down the road. You can see the owner spin a donut in the thing nearing the close of the video while turning around at an intersection. The huge wheel and tire combo also makes us smile. The look of the narrow and tall truck tires completes the evil nature of this whole creation.

At some point in our lives, we’ll own a little hot rod like this with a cantankerous, smelly, smokey, old truck engine in it and like Musto we’ll probably end up covered in soot and junk every time we drive it. Ok, that pretty much happens when we drive our current junk so it’ll be par for the course. We want this thing badly!

PRESS PLAY BELOW TO SEE MIKE MUSTO CRUISE ONE OF THE MOST ODDLY COOL HOT RODS YOU’LL LAY EYES ON! (OHHHH THE SOUND OF THAT OLD MOTOR!)