Watch (And Hear!) Junior Johnson Rip Around The Famed Ascot Park Dirt Track In California In His 427 Powered Galaxie Back In ’64/65 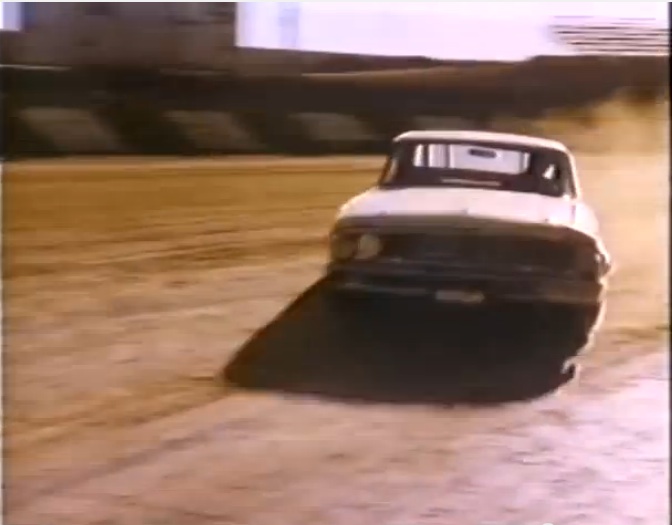 Redline 7000 was a stock car movie that was released in 1965 to national audiences and while it wasn’t exactly the smash hit of the year, it did OK and it is still a great watch today if you are a fan of old school racing. The main reason this is true is because the guys who made the movie used real stock car racers in the scenes where they could so the driving action is very authentic (for the most part). In this scene, we see Junior Johnson’s car (with Junior driving although he is never shown) at the famed Ascot Park dirt track in California. This scene of the movie apparently depicts a “try out” of sorts for one of the stars trying to get a ride in big time stock car racing. Opened in 1957, Ascot Park operated until 1990 when it was basically forced out of existence. The place was very well known in the area and region as an exciting place to watch racing and despite having seats for less than 8,000 people it held its own with far larger tracks with promotions, constant radio ads, and good access from the LA area’s freeway system.

The best part of this video is the sound. To hear that 427 FE engine working alone on the track is really something. You’ll see the car from multiple angles, you’ll see it sideways, you’ll see it spin a couple of times. The surface looks greasy as all get out and while we’re sure the director wanted some killer sideways shots and exciting spins, Johnson ends up really hauling the mail around the place. The engine sounds really, really good when it is all wound up. The Galaxie that Johnson is driving was the precursor to the famed “banana” car that Johnson campaigned with Freddy Lorenzen behind the wheel in 1966. This is a great piece of video.

On a fun side note, George Takei had a small role in the film which predated some sci-fi show he had been getting offers to work on called Star Trek. Not sure how that worked out for him.

Thanks for the tip Chris Wilson!

PRESS PLAY BELOW TO SEE JUNIOR JOHNSON WHEEL HIS GALAXIE AROUND ASCOT AND DO IT WITH THE 427 SCREAMING!

From 1954-1966 Nassau, Bahamas Was The Scene Of One Of The World's Coolest Racing Events - Nassau Speed Weeks (W/Video) Touch Nothing Inside: This 2000 Ford Super Duty Limo Can Be Your Rockstar Dream!

4 thoughts on “Watch (And Hear!) Junior Johnson Rip Around The Famed Ascot Park Dirt Track In California In His 427 Powered Galaxie Back In ’64/65”