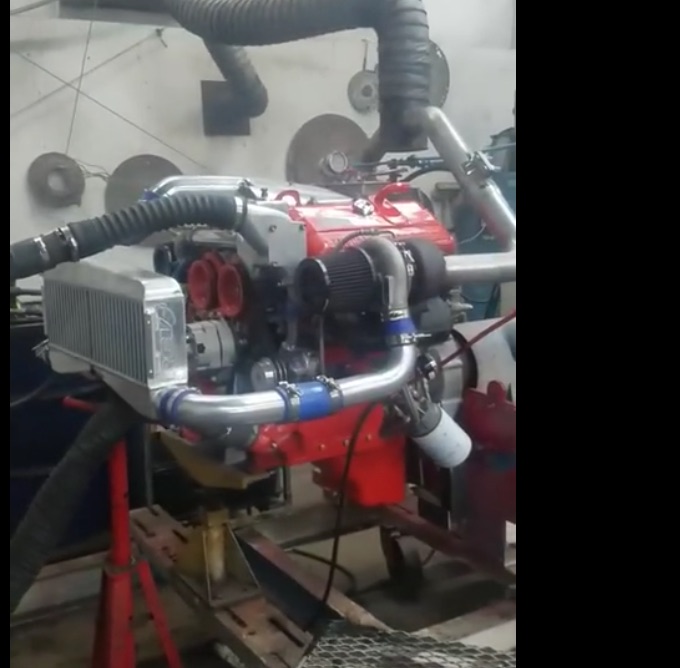 Many of you out there may not know that there were aluminum block versions of Detroit Diesels produced over the course of time. These aluminum block based engines were (as we understand) primarily for military applications where weight was needed to be cut. The good news is that savvy scrap hunters have snatched many of these up for hot rod engines the likes of which you will see in the video below.

From what we have gathered from watching other videos, the engine makes something like 400hp on about 20psi of boost from the twin turbos. That seems pretty sporty to us, especially if the thing lands in a decently light pickup with a stick!

In this video we do not get dyno numbers but we do see this little engine turn some 3,2755 RPM before the limits of everyone’s courage were reached. The sounds that this thing makes at those relatively lowly RPM levels are amazing. The two stroke layout of the engine of course helps the auditory side of things but it is still just some of the most mechanical music you’ll ever hear.

We’re going to give the dude a lesson in holding his phone in the right direction the next time he shoots video but the reality is that he captured all the sound and all as well. The sound in this video is really the payoff. That and perhaps learning’ you a little something today and my work here is done.

This New Transmission Cap And Alignment Tool Is Handy As Hell! Dream Job? This Dude Gets Paid To Go Mud Bogging Every Day In A Tough Tractor