Watch A Mazda Miata Racer Literally Reach Out And Flip The Mirror Of The Guy He Is Racing Closed – This is NUTS! 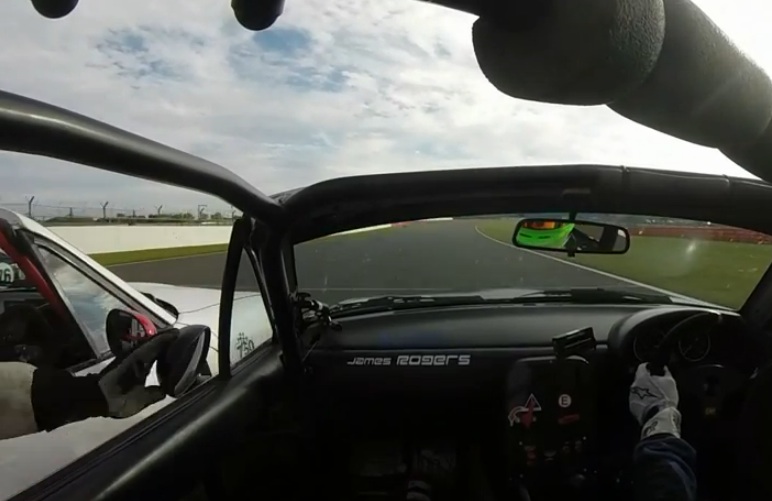 This is both one of the most hilarious and crazy videos we have posted because on one hand, when you see a guy reach out of his car and slap a competitor’s mirror shut WHILE RACING it makes you laugh. Then when you consider how badly this move could have gone for the guy and how it is a pretty dickish thing to do, it’ll make you cringe. One thing I know for sure is that this proves that the action in Spec Miata racing is as ludicrous in England as it was here. Look, I spent a few seasons as the SCCA announcer up here in New England and the spec Miata class was riotous to announcer. Identical cars with a driver talent disparity that would make your head spin added up to non-stop entertainment. Now that being said, I have never seen THIS happen. I just used to watch lots of crashes and people running out of talent.

Here’s what the description on the video says:

Onboard with James Rogers #69.

Hanger straight is part of the famed Silverstone course in England, which is one of the most well known road courses in the world. Truly a cool place that I’ve never visited but surely want to. Anyway, the last real question here is whether the dude who knocked the mirror in is a hilarious jokester or a dink who was doing it maliciously. When you are hauling down the course about three inches from a guy and you have the stones to reach out and whack his mirror, you are one of the two. Also, if this was done in anger, I’d show that video to race officials and I’m reasonably certain that they’d smack the offender pretty hard with a suspension or something. Imagine if his hand slipped off and got mashed between the two speeding cars, etc.

Ever seen anything like this? I know I haven’t!

One thought on “Watch A Mazda Miata Racer Literally Reach Out And Flip The Mirror Of The Guy He Is Racing Closed – This is NUTS!”