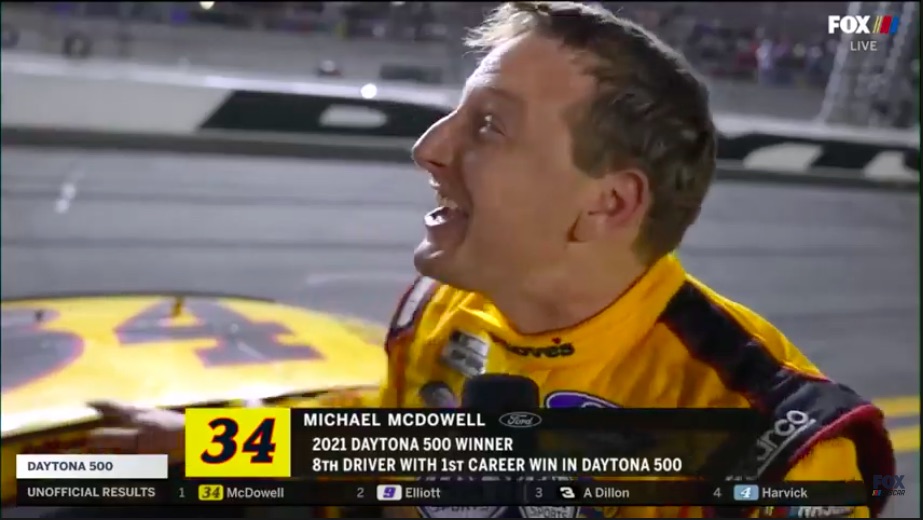 There was a wreck after 14 laps and then a rain delay that lasted nearly six hours. No, the Daytona 500 was not the smooth running affair that the sanctioning body or the TV Network wanted, but once it was restarted and the action kicked-off again, the race was really fun to watch. The ending was fun to watch if you love underdog stories, fire, and insanity. Michael McDowell was leading the race by a slim margin when the yellow flag was thrown on the final lap which made him the winner. A guy who has started hundreds of races over a yeoman like career in the NASCAR top level series, McDowell finally got his first win and it came at the sport’s most historic and prestigious event. Amazing stuff.

After the huge early race cars, there was not a whole lot to do other than watch it rain and consume some other NASCAR content on FOX for a while. The documentary called “Golden Hour” which documented the making of the movie Days of Thunder was awesome. Drivers were seen sitting in local drive through lines with their fire suits on to get a bit to eat, and the whole sport was just literally on pause. Amazingly because of the rules, teams with busted cars from the early crash were not able to wrench on their stuff for that whole period. They plotted and planned but were unable to do the work until the race restarted. It made for a great thrash.

Watch the end of the race as called by Mike Joy, Jeff Gordon, and Clint Bowyer in the booth!